Episode 25 of the WHL Podcast takes us to Edmonton where we catch up with Cam Moon, the new radio voice of the NHL’s Edmonton Oilers on 630 CHED and the former voice of the Red Deer Rebels. We also hear from highly-touted 2021 NHL Draft prospect Conner Roulette of the Seattle Thunderbirds and Prince George Cougars prospect Keaton Dowhaniuk.

Hosted by Zach Hodder, the WHL Podcast offers insight into the world of hockey through stories and perspectives shared by some of the biggest and best names from across WHL history. Currently available on Spotify, Soundcloud, YouTube, and at WHL.ca, fans will enjoy new episodes of the WHL Podcast every Wednesday. 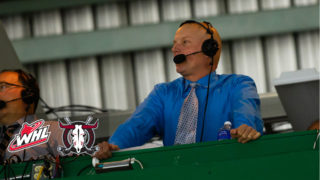 After more than 20 years as the radio voice of the Red Deer Rebels, Cam Moon is going home. A 50-year-old native of Edmonton and a former WHL goaltender (1988-1991), Moon was hired by the Edmonton Oilers and 630 CHED to serve as the new radio voice of his hometown Oilers earlier this month. 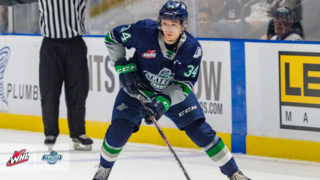 A 17-year-old product of Winnipeg, Man., Roulette burst onto the scene in 2019-20, registering 19 goals and 39 points in 54 games as a rookie with the Thunderbirds. Heading into 2020-21, he has been given an ‘A’ rating by NHL Central Scouting on its preliminary ‘Players to Watch’ list ahead of the 2021 NHL Draft.

A 16-year-old product of Star City, Sask., Dowhaniuk made his WHL debut in 2019-20, skating in eight games with the Cougars and registering one assist. Originally selected third overall by the Cougars in the 2019 WHL Draft, the defenceman is a big part of the future in Prince George.