KENT, May 10, 2017 — Six different Seattle Thunderbirds players scored Wednesday night at ShoWare Center as the T-Birds defeated the Regina Pats 6-1 in Game 4 of the WHL Championship series presented by Rogers. The series is tied 2-2.

Regina took a 1-0 lead on a power-play goal from Sam Steel at 13:15 of the first period. Dawson Leedahl and Chase Hamilton had the assists.

The T-Birds went in front with three goals in 3:22 late in the first period. Ryan Gropp converted on a crisp passing play with Keegan Kolesar and Mathew Barzal at 16:06 on the power play to tie the game 1-1. Barzal entered the Pats zone at center ice and passed to Kolesar on his right. Kolesar sent the puck quickly to Gropp at the back door and he beat Regina goalie Tyler Brown. 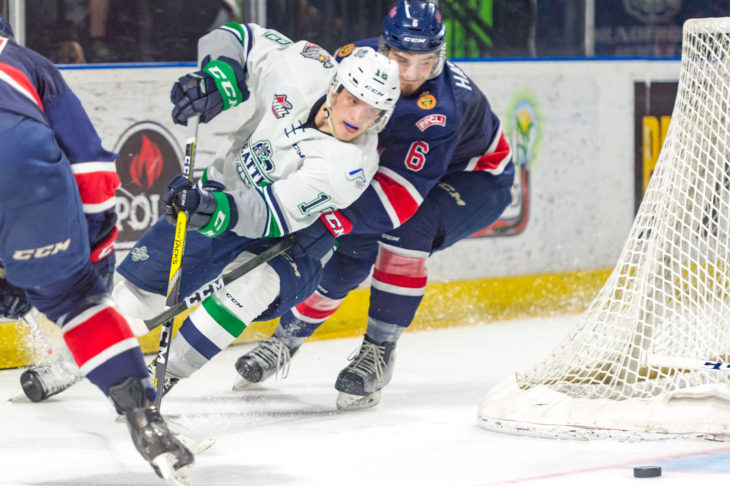 Sami Moilanen scored an unassisted goal 16 seconds after Gropp’s goal to put the T-Birds in front 2-1. Brown stopped the puck behind his net but Moilanen got to it before a Regina defenseman and wrapped the puck around and into the net at the left post.

The T-Birds went in front 3-1 at 19:28 of the first on Nolan Volcan’s fourth goal of the playoffs. Ethan Bear skated around the Regina net from right to left and found Scott Eansor in the high slot. Eansor took a shot that Brown stopped. Volcan was on top of the crease and spun to his right and whipped the puck past Brown.

Seattle took a 4-1 lead at 6:52 of the second period on Jarret Tyszka’s second goal of the playoffs. Kolesar carried the puck down the right wing and then centered to Tyszka in the slot. Tyszka took a snap shot that hit Brown’s stick and went into the net. Austin Strand had the second assist on the goal.

The T-Birds extended the lead to 5-1 at 13:52 of the second on a power-play goal from Alexander True. Gropp sent the puck from the right wall to Bear at the right point. Bear skated to his left and then took a wrist shot that True tipped over Brown for his 11th goal of the playoffs. 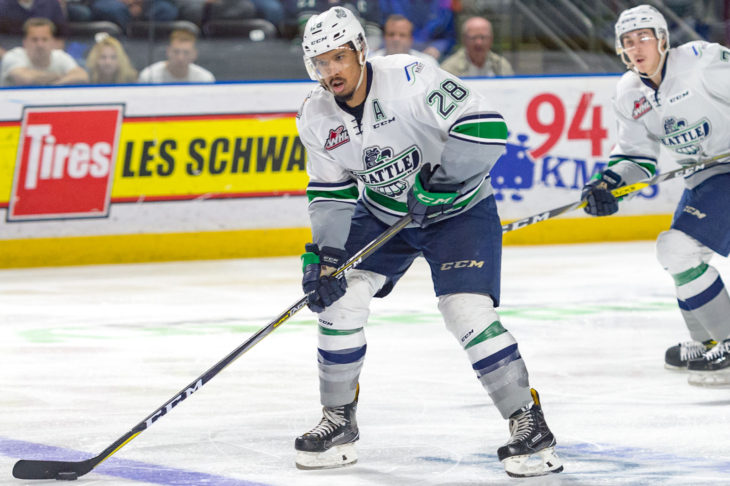 Kolesar scored at 18:51 of the second to get the T-Birds sixth goal of the game. Donovan Neuls skated out of the right corner and passed the puck to Strand at the mid-point. Strand took a slap shot that was blocked and came to Kolesar in the slot. Kolesar beat Brown over the glove for the goal.

The T-Birds led 24-15 in shots after outshooting Regina 12-8 in the second period.

Jordan Hollett replaced Brown in Regina’s net to start the third period. Brown had 18 saves on 24 shots and his playoff record is now 14-7.

Seattle goalie Carl Stankowski is now 14-4 in the playoffs after making 18 saves on 19 shots in Game 4.