As the 2019-20 Western Hockey League’s regular season approaches, two teams will be previewed each day leading up to the start of the regular season, Friday, Sept. 20. Team capsules are presented in order of 2018-19 finish within their own division. Today, we take a look at the U.S. Division’s Seattle Thunderbirds.

2019 Playoffs: Lost in first round

Forwards: With the duo of Noah Philp and Nolan Volcan headed off to the University of Alberta with their WHL Scholarships, the Thunderbirds will be losing two solid point producers. Looking to fill that void will be Matthew Wedman and Andrej Kukuca, already strong offensive contributors who will step into those roles.

“I think we want to build off everything we built last season,” La Forge said. “I really liked the way the coaches rallied the room and guys like Wedman, Ross and our older players pushed the way the Thunderbirds want to play and started to build something with Volcan and Philp helping as well. We want to build off of that identity and keep it going and bring the young players into that in conjunction with the older players.”

With Wedman recently selected in the 2019 NHL Draft in the seventh round, 199th overall, he will be looking to improve upon his 77 points (40G-37A) total from last season and increase his chances of an NHL entry contract offer from the Florida Panthers. Kukuca will look for similar results after collecting 57 points (25G-32A) in 59 regular-season games last year.

To support Wedman and Kukuca, it will be expected that Henrik Rybinsk and Payton Mount step up in their roles as second-year players. They will guide the younger talent coming into the league which includes Lucas Ciona, Michael Horon, Matthew Rempe, Conner Roulette, Kai Uchacz and Brendan Williamson. 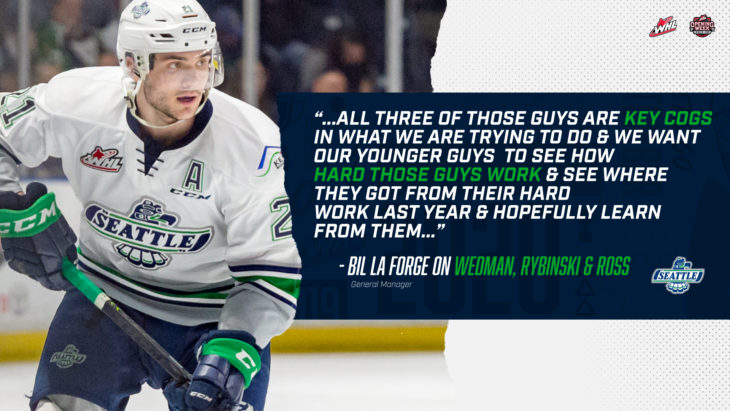 Defence: With two 19 and 17-year-olds and three 18-year-olds composing their defensive bench, the Thunderbirds look strong on the backend. While there may not be a large offensive strike coming from the blueline other than from Simon Kubicek who recorded 28 points (9G-19A) in 61 games last year, the defencemen listed are stand-up blueliners ready to defend their territory.

Perhaps with a little guidance from Kubicek, defencemen such as Tyrel Bauer (2-12-14), and Owen Williams (6-13-19) will increase their scoring potential with another year of experience under their belts.

Goal: When Roddy Ross came onto the scene in January of 2019, he lit it up. In his WHL debut, he quickly earned the eyes and attention of NHL scouts after his 6-1-0-1 record, 2.30 goals-against average and .922 save percentage in the month of January which earned Ross the WHL’s Rookie of the Month award. As his play continued, Ross continued to rise in the NHL Draft rankings. To cap off an already incredible season, Ross was selected by the Philadelphia Flyers in the sixth round, 169th overall at the 2019 NHL Draft.

The 19-year-old was also a major contributor to the Thunderbirds’ success in clinching a 2019 WHL Playoff position. This year, Ross’ consistent performance will be required for the Thunderbirds to compete in a difficult U.S. Division and show their presence in the league. 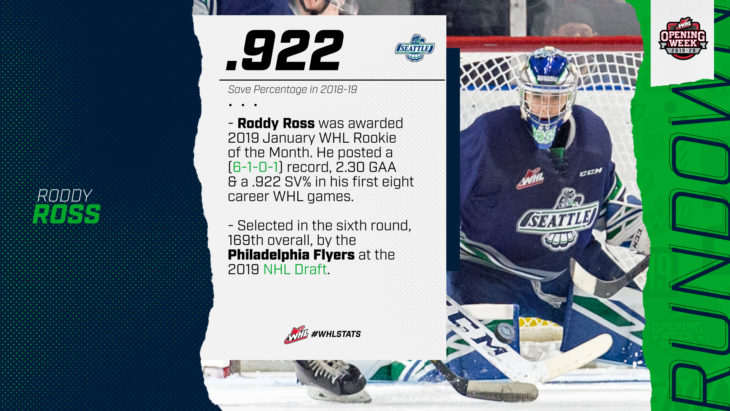 At this point in the pre-season, the supporting goaltender is still questionable for Seattle. Blake Lyda, a 2002-born goaltender with previous experience in net for the Everett Silvertips and rookie 2003-born goaltender, Thomas Milic, will compete for the remaining goaltender position on the Thunderbirds’ roster. Currently, Milic has the stronger record over Lyda during pre-season action, but Lyda’s training and time already spent in the WHL could be a leg up for the older of the two netminders.

Player to watch: Given his previous experience and performance in his five rookie-WHL games, Kai Uchacz will be the one to watch on the Thunderbirds this year. The 6-foot-1, 185-pound forward recorded one goal and one assist in his five games last season and is looking to build upon that performance with a consistent presence on the score sheet in his rookie season. With veterans like Wedman and Kukuca to guide Uchacz, there should be a strong offensive presence leading all three lines no matter the combination of players and Uchacz will be a key piece to that. 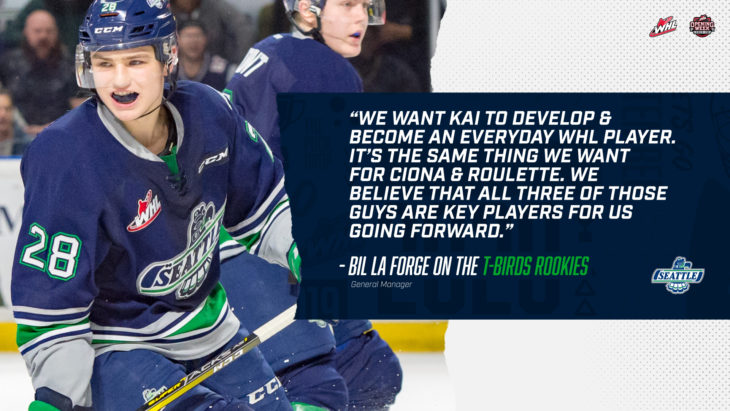 Prognosis: Despite finishing fifth in perhaps the most competitive division in the WHL, the Thunderbirds’ offensive power continued to surge for the team. However, this year with a younger offensive core looking for guidance, they may not see the same support on the scoreboard. But, with an older defensive lineup in place and a promising consistency from Ross’ goaltending, the back-half of the Thunderbirds’ game should be strong.

“I think every year the U.S. Division is arguably the hardest division in the league,” La Forge said. “I think it provides our guys a great opportunity to go up against great players every night and we want to make sure that we’re keeping up and competing in every single game and giving ourselves a chance to win every single night. I think that with the group we have, even though it’s young, I think our talent will compete and push for a playoff spot every year.” 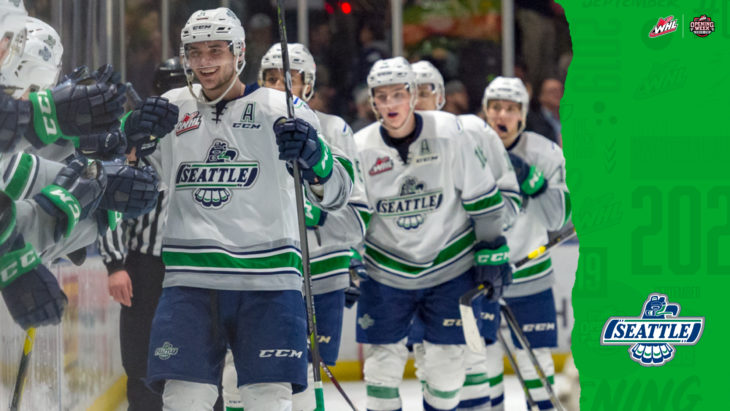