T-Birds Win Streak At 6 With Win Over Portland 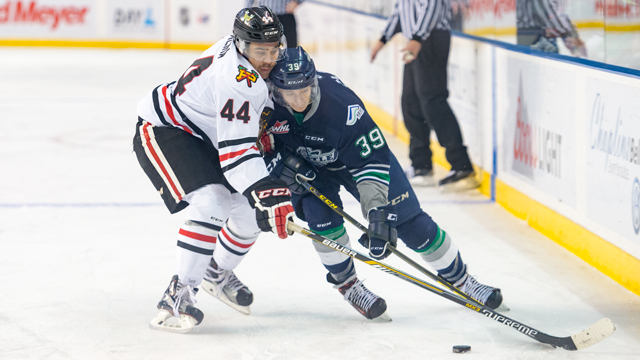 KENT, November 21, 2015 — Friday night it was the line of Ryan Gropp, Mathew Barzal and Keegan Kolesar that led the T-Birds to 4-3 win over the Kamloops Blazers.

Saturday night at ShoWare Center in front a sellout crowd of 6,162 it was the line of Nick Holowko, Scott Eansor and Jamal Watson that led the Seattle Thunderbirds to a 5-2 win over the Portland Winterhawks.

Eansor had three assists, Watson had a goal and an assist and Holowko had a goal in the T-Birds sixth consecutive win. The T-Birds next game is Wednesday, November 25, against the Kelowna Rockets at Prospera Place at 7:05pm. The Rockets are ranked sixth in the most recent BMO CHL Top 10 rankings. The T-Birds are ranked number eight.

The T-Birds have an eight-game winning streak at the ShoWare Center.

Seattle (15-6-1-0) went in front 1-0 at 7:58 of the first period. Barzal intercepted a cross zone pass in the Seattle zone. Barzal poked the puck to Kolesar and sprinted up ice. Kolesar sent the pass back to Barzal and he came in alone against Portland goalie Adin Hill. Barzal beat Hill through the legs for his sixth goal of the season. Barzal and Kolesar both extended their point streaks to six games on Seattle’s first goal.

Portland (11-10-0-0) tied the game 1-1 at 15:44 of the first. Caleb Jones took a shot from the right circle that hit the left post and bounced into the crease. Paul Bittner banged the puck into the net for the tying goal. Rihards Bukarts had the second assist.

The T-Birds scored twice in 31 seconds late in the second period to take a 3-1 lead. Donovan Neuls tipped a Jerret Smith wrist shot from the right circle on the power play past Hill at 16:22. Jarret Tyszka held the puck in at the left point and then got it to Eansor along the left boards. Eansor came off the boards and crossed the puck to Smith.

Eansor set up the T-Birds third goal at 16:53 of the second when he picked off a Portland pass just inside the blue line. Eansor skated into the left circle and then crossed the puck to Watson alone in front of Hill. Watson faked a shot getting Hill to go down and then brought the puck to his backhand and slid it past the sprawling goalie.

The T-Birds had 12 shots in the second period to six for the Winterhawks and led 26-16 in total shots after two periods.

Bittner scored a power-play goal 42 seconds into the third period to cut the T-Birds lead to 3-2. Jack Dougherty had the only assist.

The T-Birds took the two-goal lead back at 2:40 of the third. Holowko banged in a loose puck in the crease on a scramble in front of Hill. Eansor and Watson had the assists on Holowko’s fourth goal of the season.

Seattle made it a 5-2 lead at 4:27 of the third. Ethan Bear crossed the puck from the right point to Turner Ottenbreit at the left point. Ottenbreit took a slap shot. Matthew Wedman tipped Ottenbreit’s shot past Hill for his third goal of the season.

Both teams had 10 shots on goal in the third period and the T-Birds outshot the Winterhawks 36-26 in the game.

Seattle goalie Logan Flodell improves his record to 10-3-1-0 while stopping 24 of 26 shots.

The T-Birds next home game is Friday, November 27, against the Vancouver Giants at 7:05pm at ShoWare Center.