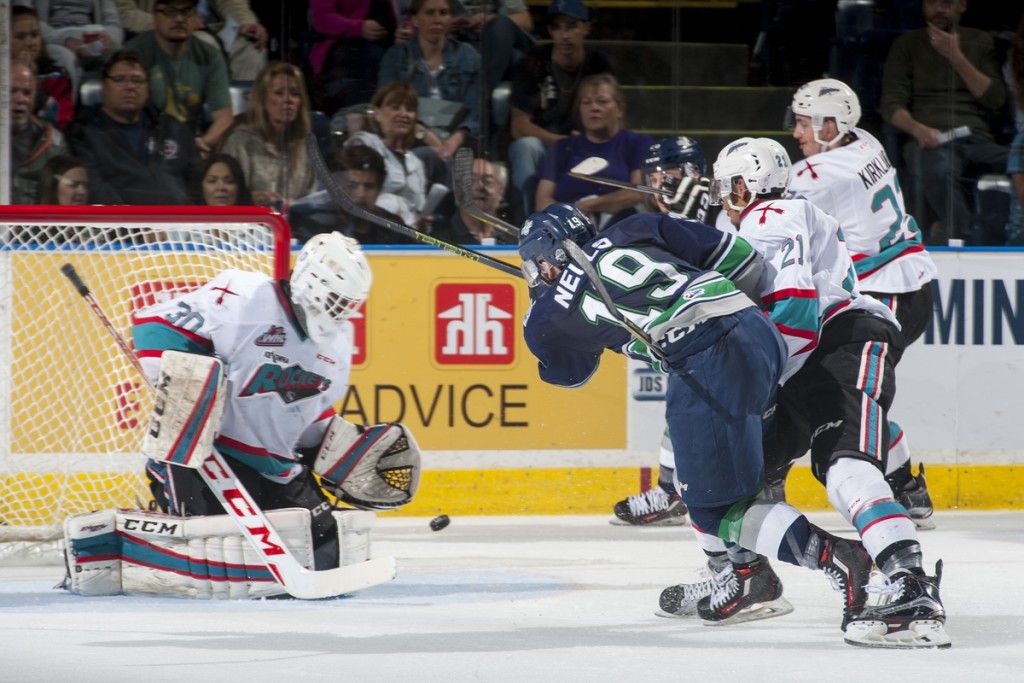 Barzal and Eansor score in 2-1 win over Kelowna

KELOWNA, April 22, 2016 — Landon Bow made 23 saves Friday night in Game 1 of the Western Conference Championship to lead the Seattle Thunderbirds to a 2-1 victory over the Kelowna Rockets at Prospera Place.

Game 2 of the Western Conference Championship is Saturday in Kelowna at 7:05pm.

The T-Birds are 5-0 on the road in the playoffs.

The T-Birds will host Games 3 and 4 of the Western Conference Championship on Tuesday, April 26, and Wednesday, April 27. Both games start at 7:05pm at ShoWare Center. Game 3 will be a Director’s Mortgage 2-for-Tuesday game.

The T-Birds took a 2-0 lead with two goals 36 seconds apart late in the second period. The first goal came at 18:34 of the period on the power play. Ethan Bear stopped an attempted clearance by Kelowna at center ice inside the blue line. Bear passed the puck to Mathew Barzal in the right circle. Barzal skated towards the Kelowna net and snapped the puck over Kelowna goalie Michael Herringer’s glove.

Seattle struck for their second goal at 19:10 of the second. Donovan Neuls and Scott Eansor worked the puck off the right wall. Eansor carried the puck into the right slot and while falling down put a shot towards Herringer. The puck hit a Kelowna skate in the crease and snuck under Herringer.

Seattle outshot Kelowna14-11 in the second period and led 19-16 in shots after two periods.

Off the ensuing faceoff the T-Birds sent the puck deep into the Kelowna end. The Rockets had one last up ice rush but the T-Birds were able to clear the puck out of their zone when Bear banked the puck off the right boards.