T-Birds Shut Out Tips In Game 3 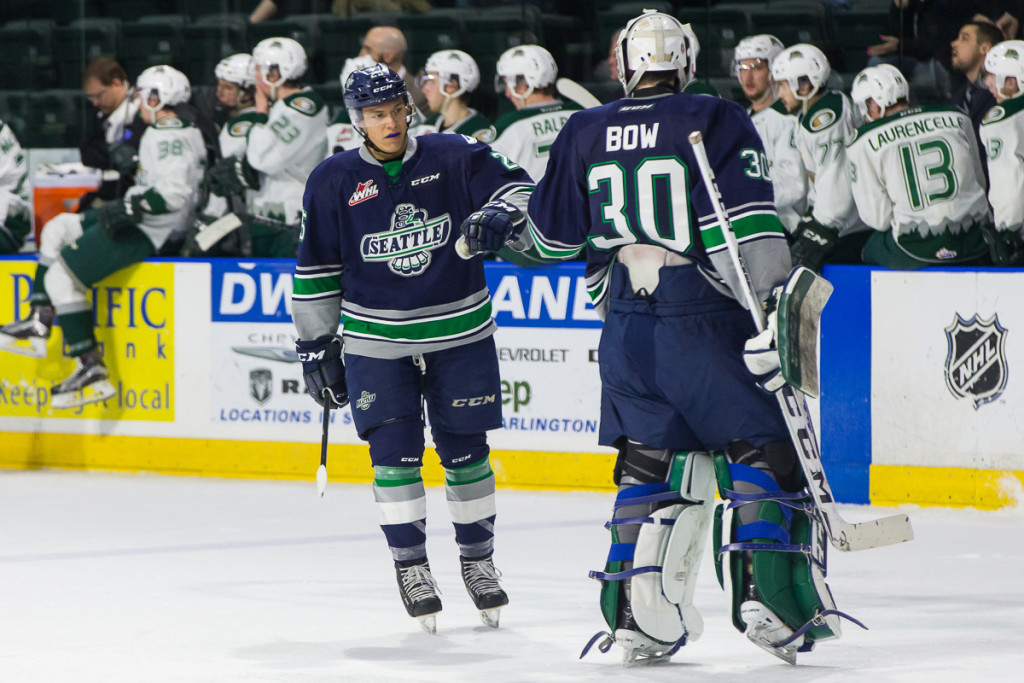 EVERETT, April 13, 2016 — Seattle Thunderbirds goalie Landon Bow made 23 saves Wednesday night at Xfinity Arena in Everett to lead the T-Birds to a 5-0 shutout win over the Everett Silvertips in Game 3 of their Round 2 best-of-seven playoff series.

The shutout was Bow’s second of the playoffs. He shut out the Prince George Cougars 5-0 in Game of the first round.

Mathew Barzal and Nolan Volcan each had three assists in the game. Defense partners Ethan Bear and Turner Ottenbreit had a goal and an assist each in the game.

The T-Birds killed off three Everett power plays in the first 12 minutes of the first period.

Seattle took a 1-0 lead at 1:39 of the second period. Scott Eansor had the puck at the top of the left circle and took a shot. Everett goalie Carter Hart reached for the puck above his head and it hit his glove and rolled over it. The puck hit the ice and rolled into the goal for Eansor’s third goal of the playoffs. Bear and Ottenbreit had the assists on the goal.

The T-Birds took a 2-0 lead at 9:14 of the second. Volcan passed the puck to Barzal who carried it into the Everett zone on the left side. Barzal had the puck in the left circle and passed it to Bear at the high point. Bear took a slap shot with Volcan in front of Hart. Bear’s shot beat the Everett goalie on the glove side.

Keegan Kolesar put the T-Birds in front 3-0 at 16:08 of the second with a carbon copy of the Bear goal. Barzal had the puck in the left circle and found Kolesar in the high slot. Kolesar beat Hart with a wrist shot on the glove side with Volcan screening Hart. Volcan had the second assist.

The T-Birds outshot the Silvertips 10-7 in the second period. Everett led 18-17 in total shots after two periods.

Everett’s Dawson Leedahl was called for a kneeing major penalty on Kolesar with 6:53 left in the third period. The T-Birds capitalized on the five minute power play with two power-play goals.

Volcan passed the puck from the right corner to Turner Ottenbreit in the slot. Ottenbreit beat Hart with a wrist shot for his first goal of the playoffs. Cavin Leth had the second assist on the goal that came at 14:10 of the third.

Jerret Smith passed puck from the right corner to Barzal behind the net. Barzal found Donovan Neuls in the low left circle. Neuls one-timed the pass from Barzal and put the puck through Hart at 15:07 of third.

Everett pulled Hart and replaced him with Mario Petit after the fifth Seattle goal. Hart stopped 26 of 31 shots in the loss. Petit had one save in just less than five minutes of action.