T-Birds Promotion Schedule Highlighted By Return Of A Legend 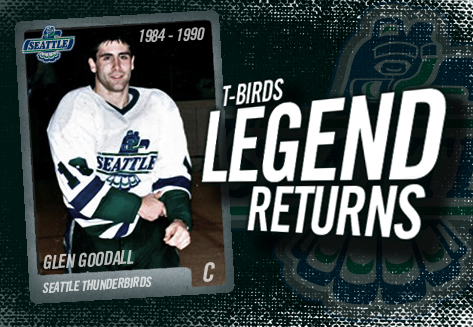 Seattle Thunderbirds legend Glen Goodall will be welcomed back to Seattle at the T-Birds home opener on Saturday, September 25, against the Portland Winterhawks at 7:05 p.m. at ShoWare Center. Glen and his family will be in attendance and the T-Birds have several events planned to recognize Glen and his contributions to T-Birds hockey.

At the home opener the T-Birds will have a pre-game Party on the Plaza at ShoWare Center that will feature food, music and a beer garden prior to the home opener.  The T-Birds will also be handing out T-Bird train whistles to the first 6,000 fans as well as 2010-11 Magnetic Season Schedules presented by Sterling Savings to all fans.

There are three giveaways and one promotional night for kid’s 14-years-old and under this season. The giveaways are 2 BECU T-Birds Beanie Nights where the first 1,000 kids will receive a T-Birds Beanie. The third giveaway is a Colin Jacobs’ Jersey T-Shirt Night for the first 1,000 kids at this game. The promotional night for kids is the Kent Reporter Kid’s Disney Costume Night. All kid’s dressed in Disney costumes get into the game against the Prince George Cougars on Friday, October 29, for free.

The 2010-11 season will see the return of 2-for-Tuesday nights. There are eight games scheduled on a Tuesday this season. At all eight of these games fans can buy two tickets for the price of one. There will also be specials at the concession stands that include $2 hot dogs, $2 soft drinks, $2 popcorn and $2 beers. The State Farm Player Magnet giveaways will be given away at all eight 2-for Tuesday nights.

On Washington Lottery Night on Friday, November 19, the first 1,000 fans 18-years-old and older will receive a free Lottery scratch ticket courtesy of the Seattle Thunderbirds. In addition, Washington’s Lottery will also select 8 purchasers of a $5 Mega Millions ticket to participate in an on ice-event for the chance to win $10,000.

The T-Birds have teamed up with the Kent Reporter Newspaper for Kent Reporter Family Pack Nights. There are six Sunday games and one Wednesday game this coming season where fans can get four tickets, four hot dogs and four soft drinks for $48. Fans must use the coupon found in the Kent Reporter or on the T-Birds website  the week of the game and redeem it at the ShoWare Center box office, which is open 10am to 5pm Monday through Friday and at 10am on Saturday game days and noon on Sunday game days.

Hockey Challenge 2011 to benefit Ronald McDonald House Charities of Western Washington and Alaska is scheduled for Saturday, February 26, when the T-Birds take on the Portland Winterhawks.

The T-Birds have several ticket package options for fans to choose from to be able to enjoy all the promotional nights.

The 24-Flex Pack, which is available all season, is $468 and the tickets can be used in any combination at any game. This package the T-Birds feel will give fans a bit more flexibility on which games they want to attend.

The Pick 10 Package is $175 and fans can pick the 10 games they would like to attend during the 2010-11 season. Tickets for this package are limited to Section 107 in ShoWare Center.

All four T-Birds season ticket options are currently on sale. They can be purchased by calling the T-Birds office at 253-239-PUCK.

T-Birds single game tickets for the 2009-10 season will go on sale on Wednesday, August 25, at 10 a.m. online at www.seattlethunderbirds.com and at the ShoWare Center box office.

For more information on promotions and giveaways this season fans should consult the T-Birds <b><a href=”http://www.seattlethunderbirds.com/schedule/promos”>promotional calendar</b></a> on the T-Birds website.

<b>Details</b><br>
<b>T-Birds Party on the Plaza – </b>Pre-Game Party on the ShoWare Center Plaza.  There will be food, music, and a beer garden. <br>
<b>Pub Nights – </b>Receive 10 tickets, 10 Beers, and 10 T-Shirts for $200. Tickets must be purchased prior to game day. <br>
<b>Kent Reporter Family Pack – </b>4 Family Zone Tickets, 4 Hot Dogs, and 4 Drinks for $48.  Offer only valid at the ShoWare Center Box Office with coupon found in the Kent Reporter or online at seattlethunderbirds.com<br>
<b>2-for-Tuesdays – </b>Buy 2 tickets for the price of one. $2 hot dogs, $2 soft drinks, $2 popcorn, $2 beers for ALL fans<br>
<b>Youth Group Night – </b>All youth groups receive 10 tickets for $95. Tickets must be purchased prior to game day. Hats for the first 1,000 tickets purchased. $1 Hot Dogs and $1 Ice Cream at the concession stands for ALL fans<br>
<b>Fred Meyer Turkey/Ham Shoot – </b>All women (18 and older) in attendance get a chance to shoot for a free turkey/ham after the game. <br>
<b>Kent Reporter Kid’s Disney Costume Night – </b>All kid’s dressed in Disney costumes get in Free.<br>
<b>Washington State Lottery Night – </b>The first 1,000 fans 18-years-old and older receive a free Lottery scratch ticket courtesy of the Seattle Thunderbirds. In addition Washington Lottery will select 8 purchasers of a $5 Mega Millions ticket to participate in an on ice-event for the chance to win $10,000.<br>
<b>Northwest Harvest – </b>Northwest Harvest will be conducting a food drive at the ShoWare Center at all Friday games in January.
<b>Toys For Tots – </b>The United States Marine Corps will be collected new, unwrapped toys for children need during the holiday season.