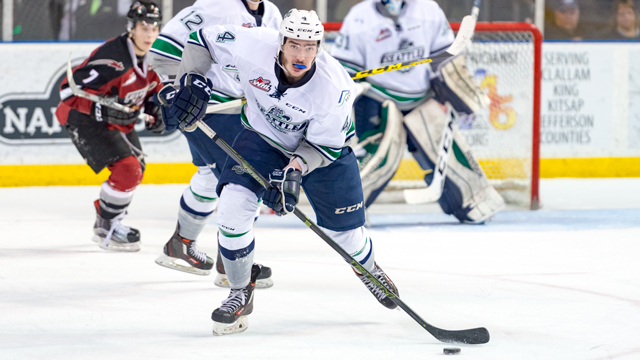 Seattle (33-23-3-0) is in second place in the US Division and now five points behind the first place Everett Silvertips. The T-Birds moved a point ahead of the Prince George Cougars and are now in fourth place in the Western Conference.

The T-Birds have three games this coming weekend. They are in Tri-City to face the Americans on Friday at 7:05pm. They host the Everett Silvertips on Saturday at 6:05pm at ShoWare Center. They finish out the weekend on Sunday in Kamloops against the Blazers at 6:05pm.

Seattle went in front 1-0 at 5:16 of the first period on a slap shot from Ethan Bear. Donovan Neuls had the puck along the board and passed it to Bear in the high slot. Bear’s slap shot beat Vancouver goalie Ryan Kubic through the legs. Bear has five goals in the last four games and 17 goals on the season.

The Giants took a 2-1 lead at 3:34 of the second period on a wrist shot by Alec Baer. Radovan Bondra and Menell had the assists.

Seattle came right back and tied the game 2-2 at 6:08 of the second. Donovan Neuls took a shot from the right circle on the rush that Kubic stopped. Cavin Leth crashed the net on the shot and swept the puck under the goalie for the tying goal. Alexandre True had the second assist.

The T-Birds took a 3-2 lead at 8:27 of the second. Nolan Volcan sent the puck to Keegan Kolesar in the left corner. Kolesar centered the puck to Scott Eansor in the slot. Eansor snapped the puck over Kubic’s blocker for his night goal of the season.

The Giants tied the game 3-3 on a wrist shot by Tyler Benson from the right circle. The goal was unassisted at 7:50 of the third period.

Turner Ottenbreit put the T-Birds back in front at 8:52 of the third. With the teams playing four-on-four, Ottenbreit pinched down from the left point and took a cross-ice pass from Ryan Gropp. Ottenbreit beat Kubic on the blocker side for his fourth goal of the season.

Jerret Smith scored the T-Birds fifth goal at 13:12 of the third. Smith beat Kubic from the right circle for his ninth goal of the season. True and Neuls had the assists on the goal.

The Giants got a power play with three minutes left in the game and pulled Kubic for a six-on-four power play. Seattle goalie Logan Flodell made several good saves to keep the Giants from the scoring a fourth goal.