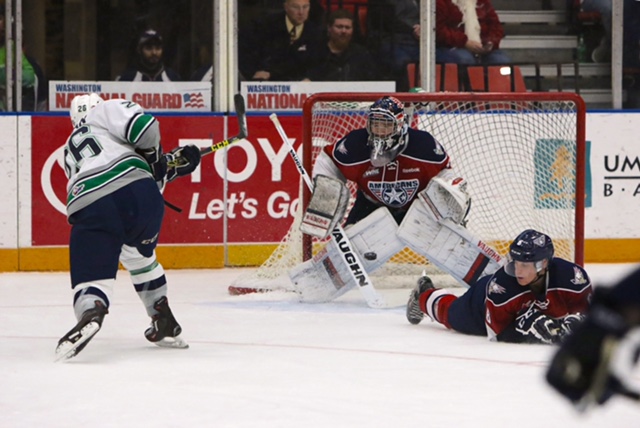 KENNEWICK, December 19, 2015 — Ryan Gropp and Nolan Volcan each had two goals Saturday night to lead the Seattle Thunderbirds to a 6-3 comeback victory over the Tri-City Americans at the Toyota Center in Kennewick.

The T-Birds moved into first place in the US Division with the win. They have 41 points on a 19-11-3-0 record and are one point ahead of the Everett Silvertips. The T-Birds will now take a seven-day break for the holidays. They return to the ice on Saturday, December 27, in Spokane to take on the Chiefs.

The Americans extended the lead to 2-0 at 6:10 of the first on a power-play goal from Michael Rasmussen. Tyler Sandhu had the only assist on the goal.

Seattle (19-11-3-0) cut the Americans lead to one goal at 12:51 of the first on an unassisted breakaway goal from Ryan Gropp. Gropp forced a turnover at the Seattle blue line and broke up ice on a breakaway splitting the Tri-City defense. Gropp brought the puck to his backhand and then slid it through Tri-City goalie Evan Sarthou’s legs for his 17th goal of the season.

Gropp tied the game 2-2 at 9:54 of the second period. Keegan Kolesar stole the puck from a Tri-City defenseman in the left corner. Kolesar curled up the board and found Gropp in the slot. Gropp beat Sarthou over the blocker with a hard wrist shot.

Nolan Volcan put the T-Birds in front 3-2 with a power-play goal at 18:25 of the second. Volcan tipped a Tri-City clearing attempt from behind their net. The puck came to Sahvan Khaira at the right point. Khaira passed the puck down the right wall to Volcan at the hash marks. Volcan skated at the Tri-City net with Gustav Olhaver screening the goalie. Volcan beat Sarthou over the glove with a wrist shot for his seventh goal of the season.

Seattle outshot Tri-City 12-6 in the second period and led 19-18 in total shots after two periods.

Jusso Valimaki tied the game 3-3 40 seconds into the third period. Valimaki scored on a wrist shot with traffic in front of Flodell. Parker Bowles and Rasmussen had the assists.

The T-Birds took the lead for good at 7:53 of the third on a couple of firsts for Owen Seidel and Luke Ormsby. Ormsby brought the puck off the right boards and into the low right circle where he took a shot. Ormsby’s shot rebounded off Sarthou into the slot to Seidel. Seidel banged the puck past Sarthou for the go-ahead goal. The goal was the first career goal for Seidel. The assist was Ormsby’s first career point.

Volcan made it a two-goal lead 58 seconds after Seidel’s goal. Jerret Smith carried the puck up ice and into the Americans zone. Smith dropped the puck to Jamal Watson who skated into the left circle. Watson took a shot that rebounded off Sarthou into the crease. Volcan crashed the net and poked the rebound under Sarthou for his second goal of the game.

Matthew Wedman iced the game for the T-Birds with a wraparound goal at 14:38 of the third. Wedman came out from behind the Tri-City net carrying the puck with one hand on his sick and slid the puck under Sarthou for his fifth goal of the season.

Tri-City replaced Sarthou with Nicholas Sanders after the sixth Seattle goal. Sarthou made 24 saves on 30 shots and his record falls to 12-18-1-0. Sanders made one save in just over five minutes of action.
Seattle outshot Tri-City 12-7 in the third period and 31-25 in the game.

The T-Birds next home game is Tuesday, December 29, against the Spokane Chiefs at ShoWare Center at 7:05pm.