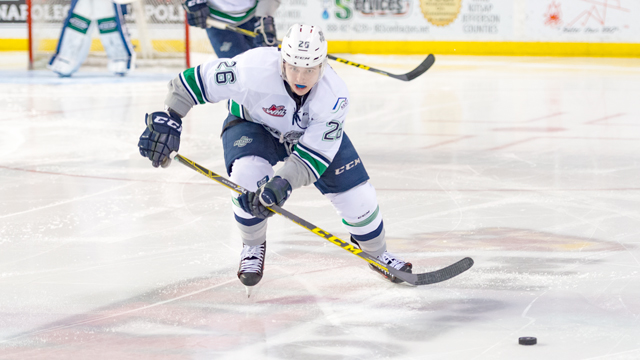 KENT, March 5, 2016 — The Seattle Thunderbirds clinched a spot in the 2016 Playoffs in front of 5,564 fans at ShoWare Center Saturday night with a 2-1 win over the Portland Winterhawks.

Seattle is now 39-23-3-0 and in sole possession of first place in the US Division. They are two points ahead of the Everett Silvertips who lost 5-3 to the Tri-City Americans Saturday. The T-Birds have seven games remaining in the regular season.

Seattle has a seven game win streak and has won 11 of their last 12 games.

The T-Birds travel to Kennewick to play the Americans on Sunday at 5:05pm at the Toyota Center.
Seattle goalie Landon Bow had very good game making 32 saves on 33 shots to improve his record to 21-20-4-0.

Seattle took a 1-0 lead on a power-play goal from Ethan Bear at 5:41 of the first period. Ryan Gropp passed the puck to Mathew Barzal in the right circle. Barzal crossed the puck to Bear in the left circle.

Bear one-timed the pass past Portland goalie Adin Hill for his 18th goal of the season.

Barzal extended his point streak to 13 games with the assist.

The T-Birds outshot the Winterhawks 10-7 in the first period.

The T-Birds took the lead back at 10:42 of the second. Off a faceoff in the left circle of the Portland zone, Scott Eansor won the puck to his right. Donovan Neuls poked the puck back to Nolan Volcan on top of the left circle. Volcan put a wrist shot over Hill’s blocker for the go-ahead goal.

Portland outshot Seattle 13-10 in the second period. Both teams had 20 shots on goal after two periods.
Portland pulled Hill for an extra attacker with a minute and a half left in the game. Bow made several good saves to keep the Winterhawks from tying the game.

Both teams finished with 33 shots on goal in the game.