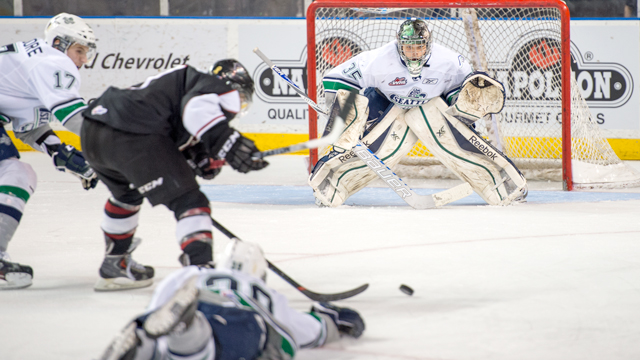 KENT, February 7, 2015 — The Seattle Thunderbirds defeated the Vancouver Giants 3-0 Saturday night.  The victory gave Seattle a four-game winning streak and pushed their record to 27-19-2-1, good for third in the U.S. Division and just five points back of second place.  Vancouver falls to 21-29-1-2.

Seattle outshot Vancouver 9-7 in a fast-moving, physical first period. Luke Osterman and Josh Thrower fought two times in the period. The T-Birds had the only power play of the period and were not able to convert.

Seattle took a 1-0 lead at 2:03 of the second period on a power play goal from Cory Millette. Mathew Barzal set up Ethan Bear for a slap shot from between the circles. Vancouver goalie Cody Porter made the save but Millette was on top of the crease to bang the rebound through the goalie. Barzal extended his point streak to four games with the assist.

The T-Birds made it a 2-0 lead at 14:15 of the second. Nolan Volcan took control of a puck in the Seattle zone and headed up ice. He passed the puck to Donovan Neuls who carried it into the Vancouver zone on the left wing. Neuls took a wrist shot in the left circle. Volcan put the rebound over Porter’s glove and off the cross bar for his sixth goal of the season.

Seattle led in shots 27-20 after two periods by outshooting the Giants 18-13 in the second period.

The T-Birds had to kill off high-sticking call on Wardley 21 seconds into the third period. Kozun stopped Jackson Houck in close then flashed the glove to stop a Brennan Menell slap shot. Kozun’s timely saves paid off as the T-Birds took a 3-0 lead just after the penalty expired. Roberts Lipsbergs found Wardley with a pass as he was coming out of the box. Barzal raced up ice to create a two-on-none rush. Wardley crossed the puck to Barzal at the blue line to send him in alone on Porter. Barzal beat Porter over the glove for his ninth goal of the season.

Vancouver pulled Porter for an extra attacker after a hooking penalty on the T-Birds with 1:39 remaining.

Kozun made two saves off a scramble before the T-Birds were able to clear the zone. The Giants gained the zone after the clear but couldn’t get anything past Kozun as the game wound down for a Seattle victory.

The T-Birds and Giants meet on Monday in Vancouver at 2pm in the second game of the home-and-home series. The T-Birds host the Western Conference leading Kelowna Rockets at 7:05pm on Tuesday.