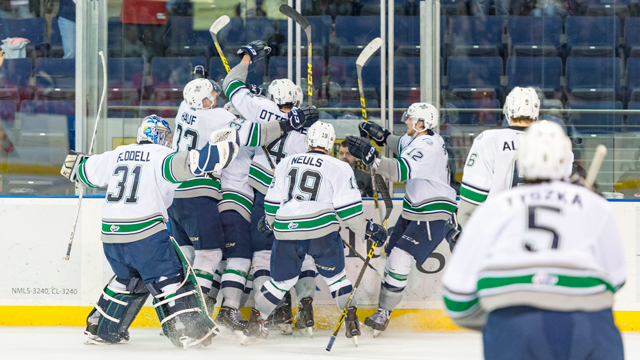 KENT, February 13, 2016 — The Seattle Thunderbirds came back from two two-goal deficits and one single-deficit Saturday night at ShoWare to beat the Portland Winterhawks 6-5 in overtime.

Scott Eansor scored the game-winning goal with one second left in overtime to win the game for the T-Birds. Ethan Bear crossed the puck from the left point to Jerret Smith at the right point. Smith passed it low to Ryan Gropp and he sent it right back to Smith. Smith took a shot with Eansor in front of Portland goalie Adin Hill. The puck hit Hill and rebounded into the slot. Eansor spun around and chipped the puck into the net for the goal.

Portland defenseman Caleb Jones scored what the Winterhawks thought was the game-winning goal 1:14 into overtime. Jones was being hooked from behind as he went in alone on Seattle goalie Logan Flodell. Jones was falling and got off a shot that Flodell stopped. Jones then crashed into Flodell and the net and the referee ruled the puck went in the net before the net came off its moorings.

The referees called a penalty on the play when Jones was hauled down. The teams were playing four-on-four on the game winning goal as the T-Birds had to kill off a penalty. There was no whistle from the time the penalty ended to get back to three-on-three overtime.

With the win the T-Birds improve their record to 30-22-3-0 and are now five points behind the first place Everett Silvertips, who lost to the Victoria Royals Saturday night.

The T-Birds play the Victoria Royals Sunday at ShoWare Center at 5:05pm. The Royals have won 11 consecutive games.

The Winterhawks made it a 2-0 lead at 18:54 of the first on goal from Abols. He put back a rebound of a Brendan De Jong shot. Dominic Turgeon had the second assists.

Seattle cut the Winterhawks lead to one 3:55 into the first period on Ryan Gropp’s 26th goal of the season. Mathew Barzal held the puck behind the Portland net for a few seconds. He passed the puck to Gropp in the right circle. Gropp beat Portland goalie Adin Hill over the glove. Jarret Tyszka had the second assist on the goal.

The T-Birds tied the game 2-2 at 9:13 of the second. Barzal passed the puck to Keegan Kolesar on the goal line to the left of the Portland net. Kolesar centered the puck to Alexander True in the slot. True beat Hill over the glove for the tying goal.

Portland got the two-goal lead back with two goals in 57 seconds late in the second. Keoni Texeira scored at 17:24 and Alex Overhardt scored at 18:21.

Seattle outshot Portland 17-9 in the second period and led 32-19 in shots after two periods.

The T-Birds came right back and erased their second two-goal deficit of the game with two goals in 1:12 early in the third period.

Donovan Neuls cut the Portland lead to one at 5:54 with a power-play goal. Jerret Smith crossed the puck to Neuls in the right circle. Neuls took a wrist shot with traffic in front of Hill and beat the goalie for his 10th goal of the season. Nolan Volcan had the second assist.

The T-Birds tied the game 4-4 at 7:06 of the third. A Portland player was called for running into Flodell right when the T-Birds got control of the puck. Cavin Leth moved the puck up ice to Volcan who skated the puck onside. With a delayed penalty situation on Portland, defenseman Smith joined the rush. Volcan crossed the puck to Smith in the low slot and Smith put the puck under Hill.

The Winterhawks took the lead back less than a minute later on a goal by Alex Schoenborn at 7:51 of the third. Jones had the only assist on the goal.

The T-Birds came back a third time and tied the game 5-5 at 11:57 on a power-play goal by Gropp. Barzal crossed the puck from the right circle to Gropp in the left circle. Gropp circled into the slot and beat Hill over the glove. Ethan Bear had the second assist on the goal.