MENU
Come hang out with us for Dave & Buster's Pub Night on Friday! 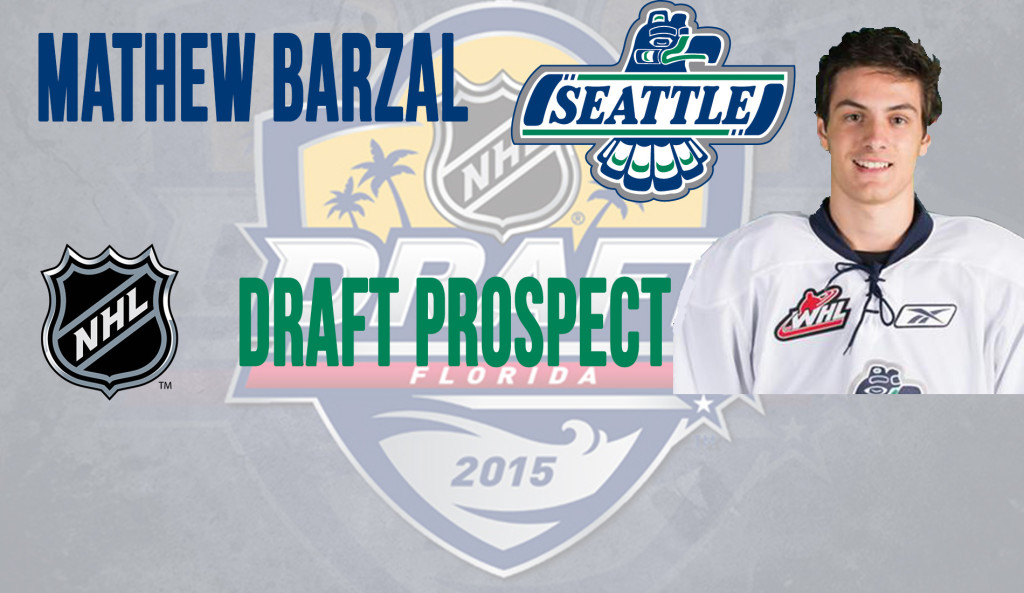 Leading up to the 2015 NHL Draft at the BB&T Center in Sunrise, Florida, on June 26th and 27th, WHL.ca will highlight WHL players looking to hear their names called on draft day. The second featured WHL player is Seattle Thunderbirds’ forward Mathew Barzal.

Barzal recently completed his second season in the Western Hockey League with the Seattle Thunderbirds.  The native of Coquitlam, BC recorded 57 points (12g-45a) while playing in 44 games. With Barzal’s help, the Thunderbirds qualified for the WHL Playoffs for a third straight season.

“His puck handling and agility are special,” said Thunderbirds general manager Russ Farwell when describing Barzal’s best attributes. “Matt’s a very driven, focused guy and wants to be a player. His ability to find the open ice, lead the play and create time is special.”

Farwell further mentioned that Barzal will continue to develop his consistency and physical play. “Matt continues to works on his technical aspects and continues to study the game by watching film. I think Matt will continue to do what he needs to do with learning different aspects of the game,” said Farwell. “He finds time and creates space on the ice and that’s an exceptional dimension that most players don’t possess.”

Selected by the Thunderbirds first overall in the 2012 WHL Bantam Draft, Barzal has accomplished some noticeable milestones in his hockey career thus far. Barzal played for Team Canada at the U18 World Championships in 2014 and 2015, earning a bronze medal on both occasions. Barzal also suited up for Team Canada at the 2014 Hlinka Memorial and claimed a gold medal.

Q & A with Mathew Barzal

Being ranked high in the CSS rankings, how do you stay focused on hockey?

I think I just got to take it day by day and can’t look to far ahead into the draft. Just because I’m doing interviews doesn’t mean I’m better than anyone else. I just worry about what’s going on around the locker room and with the team and continue to work on my game.

How did your experience at the 2014 Hlinka Memorial help you in preparing for the 2014-15 season?

It helped a lot! Being able to compete with those guys from around the world and play well and win a gold medal, to prove you can compete with the best of them is great for my confidence. I had Ethan Bear on my team so we still talk about it nowadays about winning the gold medal, but it was one of the best experiences I’ve had.

Who was your favourite NHL team growing up?

I was a big Chicago Blackhawks fan. I actually started out as a Calgary Flames fan when I was really young. I was big into Jarome Iginla. Once Patrick Kane and Jonathan Toews came into the league, I just like watching the way they play and their style so I grew towards the Blackhawks.

Who was your favourite WHL team growing up?

I was from Vancouver so I went to Giants games as a kid. I liked going to watch the guys play and see some of the up and coming guys. I remember watching Evander Kane and Brendan Gallagher when they played.

Which current NHL player do you feel you have a similar skill set and are trying to emulate?

I say Claude Giroux. We play kind of a similar game but I also really like to watch other guys play like Sidney Crosby, Patrick Kane and Pavel Datsyuk. I try to take things that they do but I think my overall game is more like Claude Giroux.

What is your favourite moment in your hockey career up to this point?

It was pretty cool last year. As a 16 year old, I scored the overtime winner against Everett in Game 3 of the playoffs so I remember that experience being pretty cool for a few days. I had to get back on the horse for Game 4 but I remember scoring that goal.

What do you need to accomplish in order to reach the next level?

I know from being a centre that face-offs are huge in the NHL. I think that’s something that can always be worked on no matter how good you are. Being consistent is a big thing. I know that in the pro’s, you can’t take a night off, you can’t even take a period off so consistency every day is a big one.

How have you adapted to playing in the WHL?

You got to be quicker than in midget hockey, you got to make plays quick and hard. Another thing is focusing on a defensive game. There are a lot of skilled guys in the league so if you’re not playing a defensive game, you’re going to be down one or two goals by the end of the night. That’s a big jump from midget!

What is your favourite activity or hobby away from hockey?

T-Birds fall to Winterhawks
4 days ago 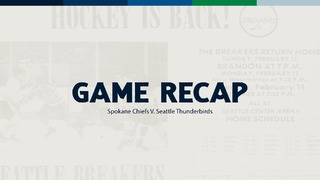