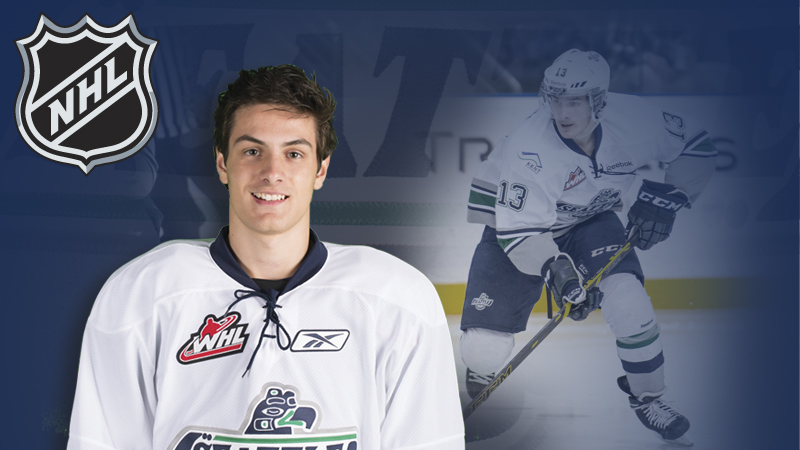 Sunrise, FL, June 26, 2015 – Seattle Thunderbirds center Mathew Barzal was selected by the New York Islanders in the first round, 16th overall, of the 2015 NHL Draft this evening in Sunrise, Florida at the BB&T Center.

He was invited to Hockey Canada’s Summer Showcase on Wednesday. He will attend Canada’s World Junior Development Camp in Calgary. This is the first step in identifying the 22 players that will represent Canada at the 2016 World Junior Championship.

Barzal won a bronze medal with Team Canada at the 2015 Under-18 World Championship April 16-26 in Zug and Lucerne, Switzerland. He led Canada in scoring with three goals and nine assists in seven games. This total put him in a tie for third in scoring at the Championship.

Barzal was a member of Team Canada’s Under-18 Team that won Gold at the 2014 U18 Ivan Hlinka Memorial Cup, August 11 to August 16, 2014 in Breclav, Czech Republic and Piestany, Slovakia. He had two goals and five assists for seven points to tie for the team lead in points.

Barzal was part of Team Canada’s U-18 National Team that won Bronze at the 2014 IIHF Ice Hockey World Championship in Finland in April 2014. He had three goals and one assist for four points in seven games.

The second through seventh rounds of the Draft start Saturday at 7am from the BB&T Center. It is expected left wing Ryan Gropp, right wing Keegan Kolesar and defenseman Ethan Bear will be selected.