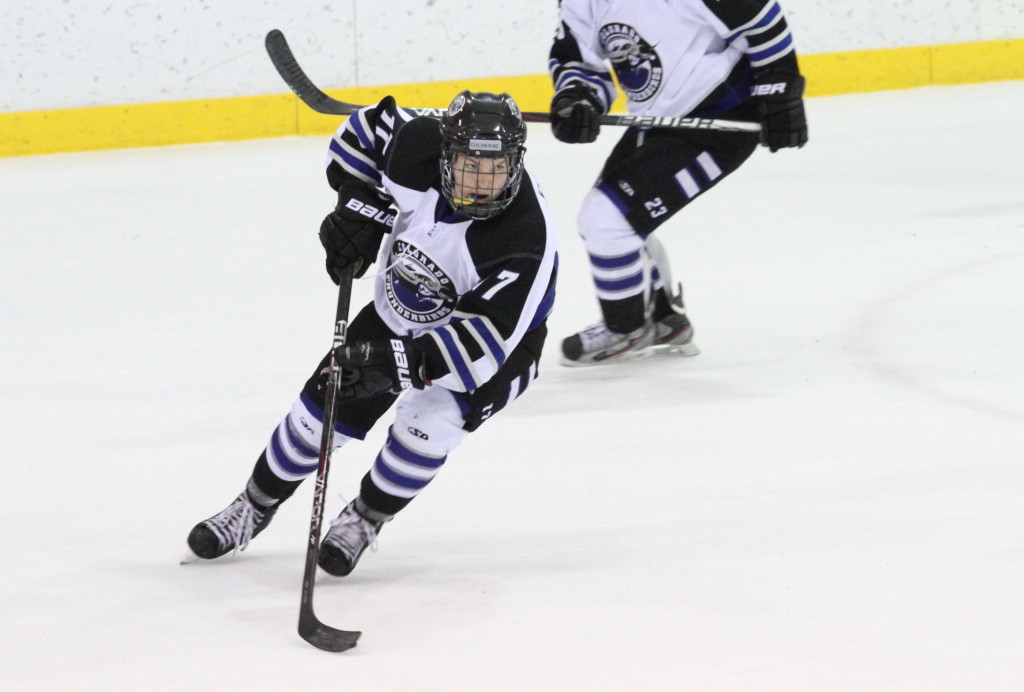 Seven future T-Birds have been signed in last year

Eansor is a center/left wing from Denver, Colorado, who played for the Colorado Thunderbirds Tier 1 Minor Midget team last season. This is the same midget program that developed current T-Birds Griffin Foulk and Danny Mumaugh.

“I’m extremely excited to sign with the T-Birds. I am thankful for the opportunity to play in the WHL,” said Eansor from Denver. “I came in and practiced with the team prior to playoffs last season. When I was here I loved the hockey atmosphere and the talent level of the team. I am ready to work hard towards a successful season next year and am looking forward to playing with a great group of guys.”

Eansor’s signing brings the number of players the T-Birds have signed to a WHL Standard Player Agreement since last summer to seven. Of those seven, five were selected in the 2012 Bantam Draft and one was taken in the 2011 Bantam Draft.

“We are excited to have Scott elect to play in the WHL and join us with the Thunderbirds,” said T-Bird general manager Russ Farwell. “He has built a reputation as a tenacious, hard-working player and this decision shows he is very serious about pursuing his hockey goals. Scott joins a very deep list of signings this year and because of these we are excited about the future of our team.”

The T-Birds welcomed defenseman Austin Douglas and center Lane Pederson to the organization just before the start of the playoff series against the Kelowna Rockets. Douglas and Pederson both attended T-Birds Training Camp prior to the 2012-13 season and joined the team for practices late last season.

Douglas was selected in the second round, 27th overall, in the 2011 Bantam Draft. He played 43 games for the Central Plains Capitals in the Manitoba Midget League (MML) last year. Douglas had six goals and 12 assists for 18 points with 116 penalty minutes.

Pederson was the T-Birds fifth round selection, 91st overall, in the 2012 Bantam Draft. This past year he played 38 games for the Saskatoon Blazers in the MML. He had 35 points on 14 goals and 21 assists with 20 penalty minutes.

Right wing Keegan Kolesar and defenseman Ethan Bear signed with the T-Birds on June 11, 2012. Kolesar was selected in the first round, 20th overall, in the 2012 Bantam Draft. Last season Kolesar played in one regular season game and two playoff games for the T-Birds. Kolesar played the majority of the season with the Winnipeg Thrashers of the MML where he had 21 goals and 17 assists for 39 points in 41 games.

Bear was drafted in the second round, 25thoverall, in the 2012 Bantam Draft. Bear played one regular season game with the T-Birds last year. He had 35 points on seven goals and 28 assists in 38 games with the Yorkton Harvest of the Saskatchewan Midget Hockey League (SMHL) last season.

Goalie Logan Flodell joined the T-Birds family on November 7, 2012, when he signed with the team. Flodell suited up three times for the T-Birds in the 2012-13 season as the backup goalie due to injuries. Flodell was selected in the third round, 47th overall in 2012. Last season he played with the Regina Pat Canadians of the SMHL. He had a 12-3 record in 15 games with a 1.60 goals against average and a .932 save percentage. Flodell had four shutouts during the season.

Last season Barzal played for the Vancouver NE Chiefs in the British Columbia Major Midget League (BCMML). In 34 games he had 103 points on 29 goals and 74 assists with 34 penalty minutes. He set the BCMML record for most assists in a season. Barzal is also first in Chiefs history in overall points scored in a season.

All five players selected in the 2012 Draft took part in the 2012 Western Canada U16 Challenge Cup held in Calgary from November 1 to November 4. Barzal and Bear were selected as All-Stars at the tournament.