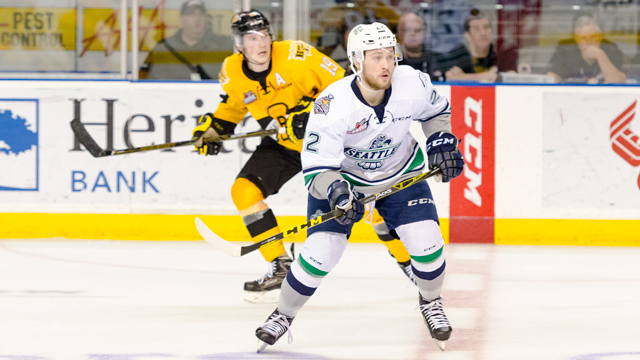 KENT, May 13, 2016 — The Brandon Wheat Kings defeated the Seattle Thunderbirds 8-4 Friday night at ShoWare Center in Game 5 of the WHL Championship to win the Ed Chynoweth Cup.

Brandon took a 1-0 lead at 3:15 of the first period on a goal from John Quenneville. Reid Duke and Tim McGauley had the assists.

The T-Birds were called for two penalties 52 seconds after the Brandon goal. The Wheat Kings have a five-on-three power play for two minutes. Seattle goalie Landon Bow made several good saves to hold off the Wheat Kings.

Seattle tied the game 1-1 at 8:44 of the first period. Brandon Schuldhaus chipped the puck up the left boards and Andreas Schumacher chased the puck. Schumacher fought through a Wheat King defenseman to get the puck and crossed it to Josh Uhrich in the slot. Uhrich took a shot that hit Brandon goalie Jordan Papirny in the glove and went into the net.

The Wheat Kings took a 2-1 lead on a power-play goal from Macoy Erkamps at 14:18 of the first. Jayce Hawryluk and Ivan Provorov had the assists.

Tyler Coulter scored at 1:33 of the second period to give the Wheat Kings a 3-1 lead. Hawryluk and Nolan Patrick had the assists.

Seattle came right back and tied the game 3-3 with two goals in 31 seconds. Mathew Barzal passed the puck to Jarret Tyszka at the left point. Tyszka took a hard wrist shot that Uhrich tipped past Papirny at 2:38 of the period.

The T-Birds went on the power play 11 seconds after their second goal. Jerret Smith scored on a slap shot from the left circle at 3:09 of the second to tie the game 3-3. Barzal crossed the puck from the right corner to Smith at the top of the left circle. Ethan Bear had the second assist.

Alexander True gave the T-Birds a 4-3 lead at 12:38 of the second. Smith passed the puck from the Seattle goal line to Cavin Leth. Leth carried the puck up the ice as the Brandon forwards changed. Leth passed the puck to True on the right wing. True carried the puck into the Brandon zone on the right wing and then cut to the slot losing the defenseman skating with him. Leth rotated the opposite way of True and the center went into the slot, pulling his defenseman with him. True was all alone in the slot and beat Papirny over the glove.

Brandon tied the game 4-4 at 18:47 of the second when Hawryluk converted on a pass from McGauley.

Brandon outshot Seattle 10-8 in the second period and led 28-19 in shots after two periods.

Patrick scored 2:55 into the third period to give the Wheat Kings the lead for good. Mitch Wheaton and Kale Clague had the assists.

Hawryluk scored on the power play at 6:19 of the third to make it a 6-4 Brandon lead. Coulter and Patrick had the assists.

Seattle pulled goalie Landon Bow with just under four minutes left in the game. Hawryluk hit the empty net at 16:41 of the third. Stelio Mattheos scored an empty-net goal with 20 seconds left in the game for the final Brandon goal.