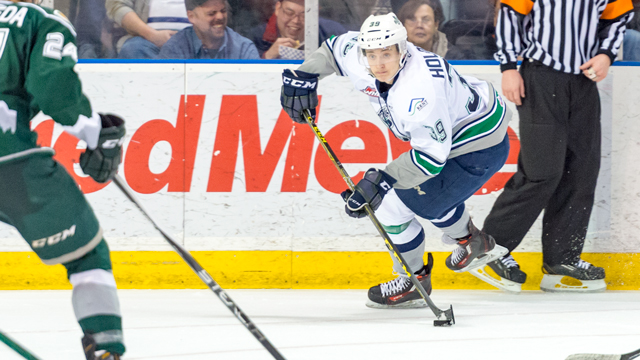 Bow leads WHL in shutouts after 1-0 win over Everett

KENT, March 11, 2016 — Landon Bow made 21 saves Friday night in front of 6,064 fans at ShoWare Center to lead the Seattle Thunderbirds to a 1-0 shutout of the Everett Silvertips.

Seattle improves to 41-23-3-0 and has now won nine consecutive games. The T-Birds are in first place in the US Division four points ahead of the second place Silvertips. The T-Birds and Everett (37-22-4-3) both have five games remaining in the regular season.

The T-Birds next game is against the Portland Winterhawks on Saturday at Memorial Coliseum at 7pm.
Bow has shutout the Silvertips in back-to-back games at ShoWare Center. He made 24 saves in a 2-0 win over the Silvertips on February 27.

Bow leads the WHL in shutouts with seven, one ahead of Everett goalie Carter Hart. Bow’s record is now 22-20-4-0.

The T-Birds have clinched a playoff spot but an opponent has not yet been determined. The T-Birds will open the playoffs on Friday, March 25, at ShoWare Center at 7:35pm.

Seattle took a 1-0 lead at 6:41 of the first period. Mathew Barzal carried the puck out of the Seattle zone and passed it to Ryan Gropp on the left wing. Gropp skated the puck down the left wing. From the hash marks along the boards Gropp made a saucer pass to Nick Holowko skating to the right post. Holowko redirected Gropp’s pass over Hart.

Barzal’s assist gives him 60 on the season. The last T-Bird to have 60 or more assists in a season was Patrick Marleau in the 1996-97 season when he had 74 assists.

In a tight checking second period the T-Birds outshot the Silvertips 6-5. The T-Birds led 16-10 in shots after two periods.

Everett pulled Hart for an extra attacker coming out of a timeout with 2:14 left in the game. The Silvertips kept the puck in the Seattle zone for a minute and a half and had several good scoring chances. Bow made several solid saves to keep the Silvertips from scoring.

T-Birds single game tickets for the 2015-16 season are available online at the T-Birds website and at the ShoWare Center box office. The ShoWare Center Box Office is open Monday through Friday 10 am to 5 pm and Saturday and Sunday game days at noon.