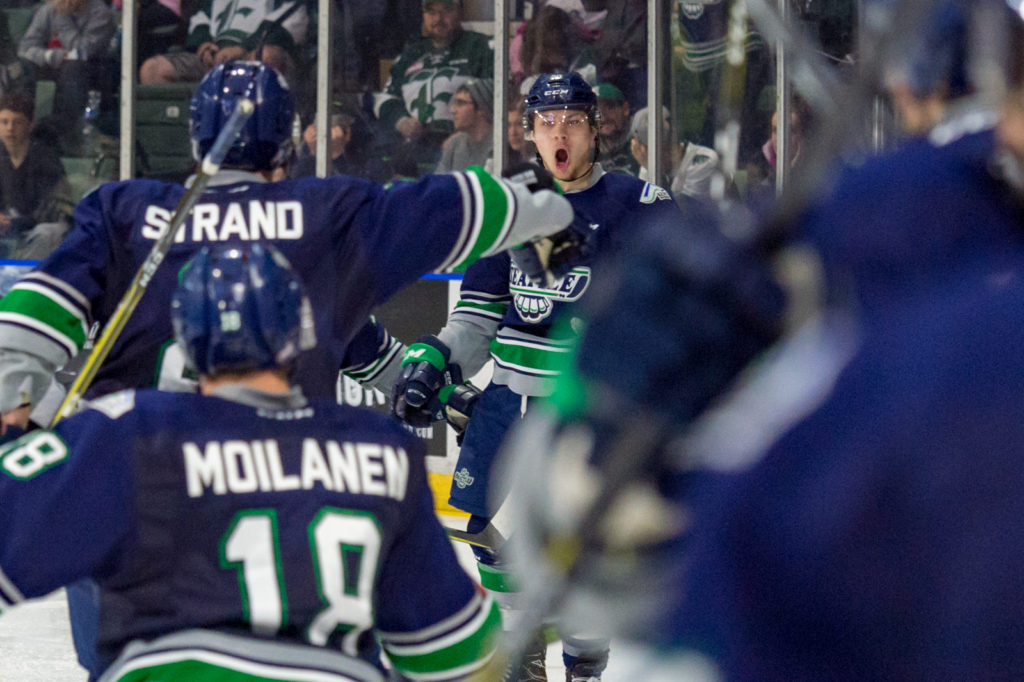 EVERETT, March 24, 2018 — Zack Andrusiak scored 5:04 into overtime Saturday night at Angel of the Winds Arena in Everett to give the Seattle Thunderbirds a 5-4 victory over the Everett Silvertips in Game 2 of their first round playoff series.

Andrusiak took a pass from Reece Harsch in the neutral zone and split two Everett defenders. Andrusiak beat Everett goalie Carter Hart with a backhand shot over the blocker.

The first-round playoff series is tied 1-1.

Game 3 is Tuesday, March 27, at 7:05pm at accesso ShoWare Center. This game will be a Directors Mortgage 2-for-Tuesday game that will feature two-for-one tickets and beers and $2 popcorn, $2 hot dogs, and $2 soda.

Everett went in front 1-0 at 2:17 of the first period on a goal from Martin Fasko-Rudas. Gianni Fairbrother had the only assist.

Seattle quickly tied the game 1-1 on the power play at 4:15 of the first. Turner Ottenbreit passed the puck from the right point to Austin Strand at the left point. Strand one-timed the pass and beat Hart over the glove. Donovan Neuls had the second assist.

The T-Birds took a 2-1 lead 2:18 after their first goal. Ottenbreit carried the puck up the ice and passed to Sami Moilanen who entered the zone on the left wing Moilanen took a shot from the left circle that rebounded off Hart to Wedman in the slot. Wedman put back the rebound and the puck came off Hart right to Moilanen to the left of the goal. Moilanen put the puck into an empty net as Hart was down from making the save on Wedman.

Midway through the first period an Everett shot hit the right post and came into the slot. The T-Birds carried the puck up the ice and held some zone time until the puck got trapped under a T-Bird in a board battle behind the Everett net. The referees went to the scorer’s table for a video review of the Everett shot. After several minutes the referees waved no goal.

Everett tied the game 3-3 33 seconds into the second period on a five-on-three goal by Garrett Pilon. Kevin Davis and Patrick Bajkov had the assists. 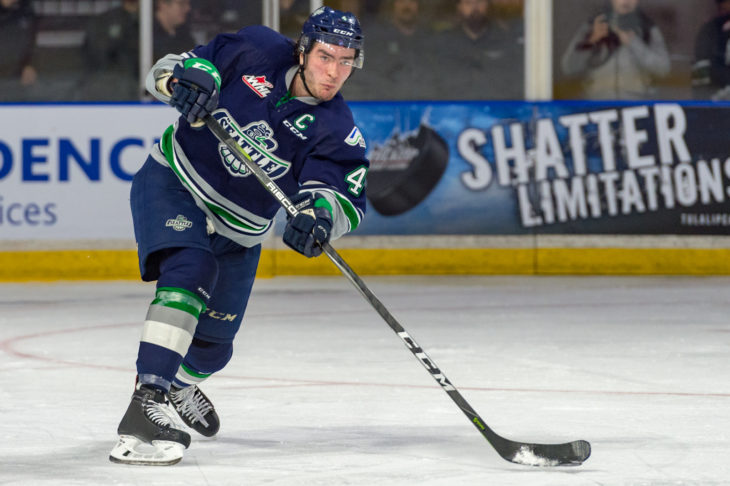 Ottenbreit gave the T-Birds a 3-2 lead with a power-play goal at 13:23 of the second. Neuls passed the puck to Ottenbreit at center ice and he beat Hart with a slap shot over the glove. Wedman had the second assist.

Pilon tied the game 3-3 at 17:11 of the second off an assist from Reece Vitelli.

The Silvertips outshot the T-Birds 11-8 in the second period and had a 29-22 advantage in shots after two periods.

Everett pulled Hart with 1:30 left in the game for an extra attacker. Pilon was able to put back his own rebound with 54 seconds left to tie the game 4-4.

The Silvertips had a 46-31 advantage in shots after 60 minutes. 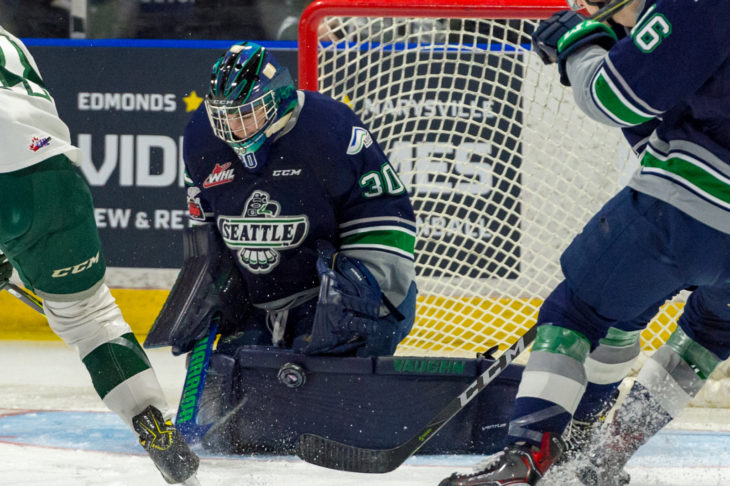 The 2017 WHL Champion T-Birds have a Group Ticket Special for Game 4 of the first round of the 2018 WHL Playoffs. Fans can purchase 10 tickets for just $220 and get two FREE tickets.

This Playoff Group Ticket Special is available by contacting one of our three Account Executives, Tara Knop, Ryley Dozier or Sean Runnels. If you need more information or have questions call us at 253-239-PUCK (7825) or fill out a Ticket Information Request and a member of our staff will get in touch with you.

This Group Ticket Specials is NOT AVAILABLE ON GAME DAY. They are advance purchase only.