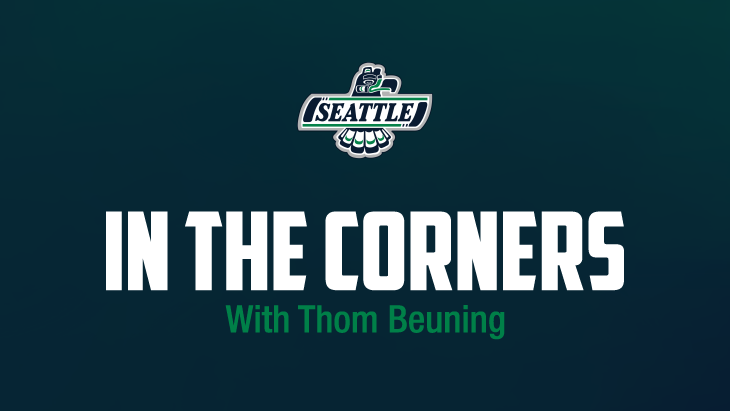 Last season, in a pandemic reduced 23-game campaign, the Seattle Thunderbirds made a conscious decision to ice a young roster.  The thought process was, that in a year when there would be only two dozen games and no league championship to play for, they would use those games to give their young talent maximum ice time and hopefully speed up their development.

As a result, the T-Birds owned the youngest roster in the Western Hockey League with just one 20-year-old, Keltie Jeri-Leon, while playing as many as 12 rookies. At times the team was younger then even they imagined as injuries and international tournaments limited some of their older players availability.

Though his team was young, head coach Matt O’Dette didn’t feel he had to change his approach.  “Obviously we were young, but some young talent, which is nice.  I think they acclimatized to the league really quickly.  I think that speaks to the level of player we have with our young guys.”

O’Dette believes the league overall last season was young, which may have affected the overall pace of play, but still says players new to the league had to adapt and his young players took up that challenge.  “Right off the hop, players like Gustafson and Korchinski, and Oremba when he got his chance, didn’t look out of place.”

So with that experience under their belts, that means Seattle will be an older, more seasoned team this go-round, right?  Well, yes and no.  Certainly, all the returning players are a year older. A trio of 19-year-olds in Ty Bauer, Matt Rempe and Jared Davidson are poised to take on even more ice time, scoring and leadership.

18-year-olds Mekai Sanders, Reid Schaefer, Thomas Milic and Sam Popowich are ready to break out of the shadows as they enter their second season with the club. Meanwhile fellow 18-year-olds Lucas Ciona and Conner Roulette look to build on two seasons that turned them into NHL draft picks in July.

It’s a group O’Dette is excited to see move forward.  “I’ve been impressed with those guys in training camp so far, and the preseason games.”  In fact, Sanders and Schaefer led the T-Birds in preseason scoring. Now O’Dette wants to see that carried forward into the regular season.

“I want to see consistency from those guys.  When the lights come on in the regular season, to still maintain that level of play, be reliable players. Being reliable players and having good habits, gets you on the ice.”

But the Thunderbirds will still be a relatively young team.  While technically players like Jordan Gustafson and Kevin Korchinski are entering their second season in the league.  That first season consisted of just 23 games.  That’s just one-third of a normal 68-game schedule.  Yes, Sam Oremba was here all of last season, but he only played in 15 of the 23 contests and he did that at age 15, so in reality the 2021-22 campaign will be his 16-year-old rookie season.

And Seattle also got younger for this season by trading away some veterans this summer.  Gone is defenseman Cade McNelly, who would have been a 20-year-old for the T-birds had they kept him.  He was traded to the Vancouver Giants, along with now 19-year-old right wing Payton Mount, in exchange for draft picks.  Two other players who would have been 19-year-olds on this roster have also been dealt for future selections in the WHL Prospects Draft.  Defenseman Luke Bateman was sent to Regina while goaltender Jackson Berry is now a Prince Albert Raider.

Throw in some youngsters who will be skating in the WHL for the first time this coming season, along with two relatively young Imports playing in North America for the first time, and you still have a T-Birds roster that leans to the young side.

Thunderbirds General Manager Bil La Forge agrees.  “I think we’re still going to be one of the younger teams in the league, but I think we’re more experienced now.”  While young in age, La Forge doesn’t necessarily see that as lacking experience. “A lot of our guys have been exposed to situations that many people in their age group haven’t been exposed to.”

The hope is, young or not this team is ready to move forward.  La Forge sees that as the next logical step.  “I think we should be ready to take a step this year both in our performance and our development.”

What’s the payoff of so many young players skating in a 23-game, pandemic shortened season?  We start answering that question October 2nd.

T-birds Doubled Up in Game Three
9 hours ago