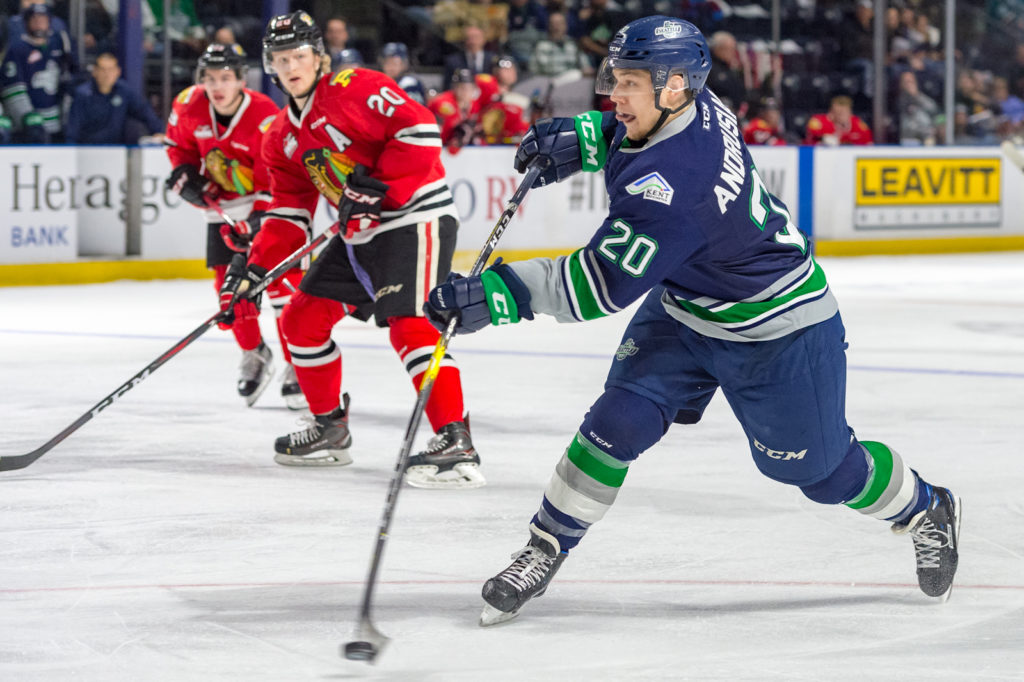 Andrusiak has two goals in 6-3 loss to Portland

This was the 28th time the T-Birds and Winterhawks have played on New Year’s Eve. The T-Birds are 12-15-1-0 in this annual game.

Zack Andrusiak had two goals in the game and has scored six goals in the last two games. He scored four times against Portland on December 29 at accesso ShoWare Center in an 8-6 loss.

Seattle (11-18-4-0) took a 1-0 lead at 10:47 of the first period on Andrusiak’s 26th goal of the season. Jared Davidson knocked the puck off a Portland forward’s stick in the high slot of the Portland zone. Davidson chased the puck into the left corner and then found Andrusiak all alone in front of Portland goalie Shane Farkas. Andrusiak took a shot that Farkas stopped but the Zack chipped the rebound over the goalie’s right pad.

Portland (21-11-3-2) tied the game 1-1 on a five-on-three power-play goal by Ryan Hughes at 12:4 of the first period. Joachim Blichfeld and Jared Freadrich had the assists.

Andrusiak put the T-Birds back in front at 14:57 of the first. Payton Mount sprung Noah Philp on a breakaway down the right wing. In the low right circle Philp neatly crossed the puck to Andrusiak just trailing the play. Andrusiak roofed the puck over Farkas as he sprawled to make the save.

Jaxan Kaluski made it a 3-1 lead at 19:14 of the first with a power-play goal. Simon Kubicek took a slap shot from the right point that rebounded to the right of Farkas. Tyler Carpendale got a stick on the puck before Kaluski popped it past the goalie for his third goal of the year.

Both teams had 13 shots on goal in the first period.

Portland cut the T-Birds lead to one goal 39 seconds into the second period on a goal by Blichfeld. Nick Cicek and Hughes had the assists.

Blichfeld scored a power-play goal at 5:04 of the second to tie the game 3-3. Hughes and Freadrich had the assists.

Portland had a 33-20 advantage in shots after two periods by outshooting the T-Birds 20-7 in the second period.

The Winterhawks took a 6-3 lead on a goal by Seth Jarvis at 8:04 of the third period.