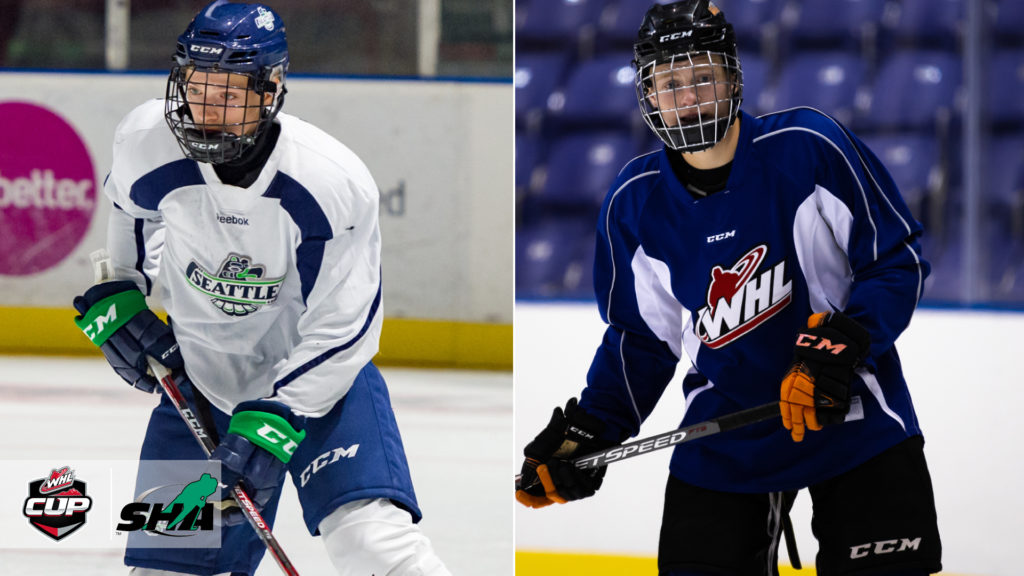 Heading into the 2019 WHL Cup, Saskatchewan has momentum on their side in a bid to return to the podium at the four-team tournament.

Last February, the team from the Land of Living Skies pulled off a fourth-place finish at the 2019 Canada Winter Games in Red Deer, Alta., placing second among teams from Western Canada.

While it didn’t result in a medal, their strong performance in pool play has the province thinking bigger in terms of what could be for next week as they return to Alberta for another tournament against provincial competition.

“We want to write our own story,” said head coach Devan Praught. “We want these guys to take pride and own their opportunities and own the moment. We’ll build off the success of the Canada [Winter] Games. It’s just about us writing our own story and staying in the moment.

“We’ve got a lot of energy and excitement behind us right now and we want to stay in that for the week.”

Praught was on the bench for the province in Red Deer last winter, serving as an assistant coach. Now, the head coach of the Notre Dame Midget AAA Hounds is ready to lead the bench this year. It comes at an opportune time as well as the team will be in search of their first medal at the tournament since a bronze in 2012.

This year’s group of talent from the province have already been put through the paces of their first WHL training camp and are eager to begin climbing the ladder with Hockey Canada’s Program of Excellence.

The province has yet to announce their official leadership group, but there’s no question that defenceman Kevin Korchinski, a prospect of the Seattle Thunderbirds, will play a big role in forging the team’s pathway to success. He was Saskatchewan’s top player selected at the 2019 WHL Bantam Draft, chosen 10th overall.

“I think it’ll be a learning experience to see where I am with my level and skill compared to the best kids in Western Canada,” Korchinski said. “It should be a good experience just to see where I’m at.”

While the team has been compiled from throughout the province, the level of chemistry should be strong. Korchinski leads a contingent of Saskatoon products on this year’s roster, but the team also features talent from the likes of Regina, Canora, and Weyburn among other pockets of the province.

Victoria Royals prospect Carter Dereniwsky is representing Canora and is eager to shine more of a spotlight on the minor hockey system of nearby Yorkton.

“It’s definitely a good stepping stone and it boosts [my] confidence a lot, especially since the guys from Yorkton have had successful careers in the WHL,” Dereniwsky said. “It’s nothing but a confidence booster for sure.”

With Yorkton’s Bantam AA team in the 2017-18 season, Dereniwsky average a goal per game. He then posted a respectable 25 points (8G-17A) in his first season at the Midget AAA level last year before the Royals called out his name last May.

“My offensive game is where I standout most,” Dereniwsky said. “I’m a really offensive guy. I like to control the play and always looking to score goals.”

He’s one of five second-round WHL Bantam Draft selections that will make his home province a deep squad from top to bottom. Dylan Ernst was the top goaltender selected last May, chosen 28th overall by the Kamloops Blazers. The list of depth from the second round includes defenceman Hunter Mayo, a prospect of the Red Deer Rebels who was chosen with the first pick of the second round last May and Prince George Cougars forward prospect Kyren Gronick, who is already producing above a point-per-game pace with the Regina Pat Midget AAA Canadians.

As for their introduction to the tournament, facing British Columbia and Alberta in back-to-back games will be tough. However, Praught believes his players will be better for it overall once the tournament reaches its later stages.

“We want to establish our process,” Praught said. “Results will be there at the end of the day. Our focus for us it’s being prepared, staying focused in the game, bringing energy and being positive and then competing.

“So be it if results don’t go our way the first couple days.”

Saskatchewan’s schedule at the tournament begins Wednesday, October 23 (3:00 p.m. MT) when they take on British Columbia at the Markin MacPhail Centre in Calgary, Alta.

🚨Announcement🚨 Male U-16 Team Saskatchewan final roster has been announced. Head to the link below for full story and roster! ⬇️