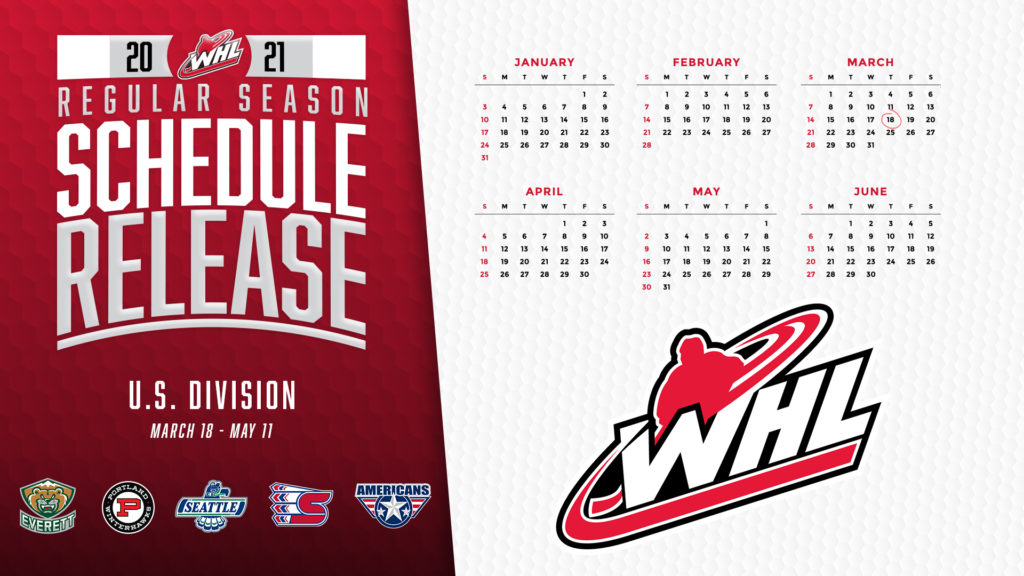 Calgary, Alta. – The Western Hockey League announced today the complete U.S. Division schedule of games for the 2020-21 Regular Season, which is set to begin Thursday, March 18.

The WHL’s U.S. Division will open when the Tri-City Americans host the Portland Winterhawks in Kennewick, Wash., on March 18 before continuing on Friday, March 19 when the Seattle Thunderbirds host the Spokane Chiefs in Kent, Wash.

CLICK HERE to view all games released on the 2020-21 WHL Regular Season schedule to date, including all 60 games on the WHL’s U.S. Division schedule.

The WHL has developed an extensive set of protocols, to not only provide a safe environment for players and staff, but to protect individuals in the community. The WHL will implement an ongoing weekly private antigen testing strategy.

Enhanced screening for all WHL players, billets, team staff and officials will take place on a daily basis, including regular temperature screenings as well as symptom monitoring through the WHL Athlete RMS Mobile Application. When participating in games and practices, WHL players must wear gaiter-style masks while on the bench. WHL Officials will be required to wear gaiter masks when on the ice. WHL coaches and other team personnel will be required to wear masks at all times, including while conducting practice and while behind the bench during games.

As the WHL returns to play in the U.S. Division, no spectators will be permitted to enter WHL facilities.

WHL fans can look forward to taking in games across the whole league through the newly-launched WHL Live on CHL TV. More details available by visiting watch.CHL.ca.