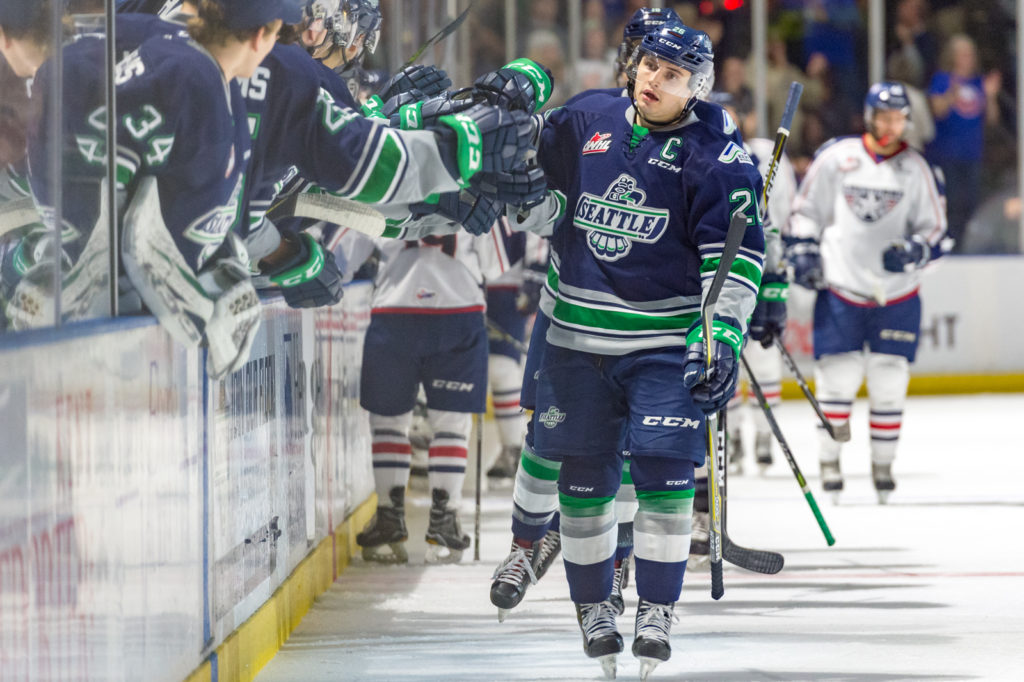 Volcan has two goals, two assists in 5-4 win over Tri-City

KENT, October 16, 2018 — Nolan Volcan had two goals and two assists Tuesday night at accesso ShoWare Center to lead the Seattle Thunderbirds to a 5-4 win over the Tri-City Americans.

This was the first of three consecutive games between the T-Birds and Americans. The two teams meet Friday in Kennewick at 7:05pm and then are back at accesso ShoWare Center on Saturday at 6:05pm.

Seattle (6-1-1-0) took a 1-0 lead at 4:09 of the first period on Owen Williams second goal of the season. Reece Harsch won a board battle along the right wall to Nolan Volcan at the right point. Volcan crossed the puck to Williams at the left point. Williams skated down the slot and put a hard wrist shot over Tri-City goalie Beck Warm’s glove.

The T-Birds extended the lead to 2-0 at 7:27 on a power-play goal by Volcan. Andrej Kukuca had the puck on the right boards and sent it low to Matthew Wedman on the goal line. Wedman centered to Volcan in the slot and he one-timed the puck past Warm for his third goal of the season.

The T-Birds struck 24 seconds into the second period on a scramble goal to take a 3-1 lead. Volcan had the puck to the right of the net and took a shot. Wedman crashed the net and got a stick on the puck, which then squirted to Kukuca to the left the net. Kukuca punched the puck over a sprawling Warm.

The Americans cut the lead to one goal again at 1:06 of the second when Parker AuCoin scored. Sasha Mutala and Mitchell Brown had the assists.

Nolan Yaremko tied the game 3-3 at 15:30 of the second. Brown and Dominic Schmiemann had the assists.

Yaremko put the Americans in front 4-3 at 15:30 with his second goal of the game. Dom Schmiemann and Brown had the assists.

Reece Harsch tied the game 4-4 at 18:36 on the power play. Noah Philp skated the puck into the right circle and then centered to Graeme Bryks in the high slot. Bryks quickly moved the puck to Harsch in the left circle. Harsh one-timed the Bryks pass and beat Warm over the glove.

The T-Birds had a 24-22 lead in shots after two periods. Tri-City outshot Seattle 15-11 in the second period.

Volcan scored his second goal, and the game-winning goal, at 1:49 of the third period. Volcan passed the puck from the left boards to Kukuca in the left circle. Kukuca took a shot that Warm couldn’t control. Volcan came in dragged the puck around Warm and put it into the net.