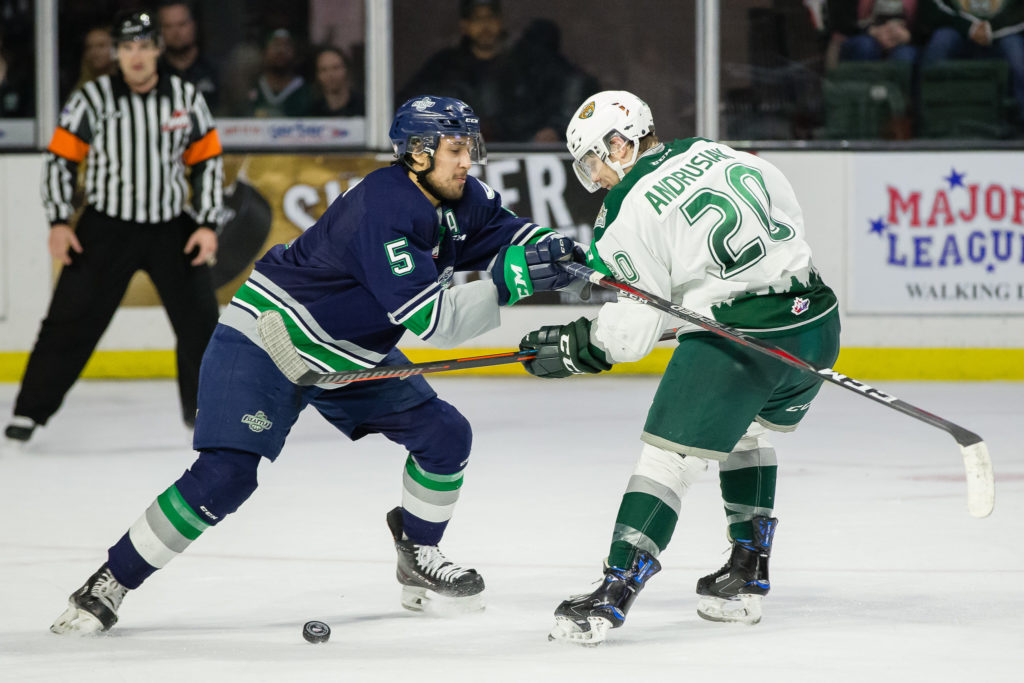 EVERETT, February 22, 2019 — Twice the Seattle Thunderbirds were down a goal to the Everett Silvertips Friday night at Angel of the Winds Arena.

Twice the T-Birds came back and tied the game with defenseman Jarret Tyszka registering an assist on each tying goal.

Tyszka scored the game winner in overtime to lead the T-Birds to a 3-2 victory over the Silvertips, their second consecutive win over their I-5 rival.

Matthew Wedman carried the puck up the right wing into the offensive zone. Wedman cut to the high slot and dropped the puck for Tyszka trailing the play. Tyszka took a stride and then beat Everett goalie Dustin Wolf with a snap shot over the blocker at 2:24 of the extra frame. Andrej Kukuca had the second assist on what was Tyszka’s seventh goal of the season.

Goalie Roddy Ross had 39 saves and improved his record to 11-4-0-1. Ross stopped Bryce Kindopp on a shorthanded breakaway in the second period and made two consecutive right pad saves on Jackson Berezowski late in the third period, followed by a scramble in the crease, to keep the game tied 2-2.

Seattle’s record is now 24-28-5-1 and are in the second wild card playoff spot in the Western Conference. The T-Birds are four points ahead the Kamloops Blazers, who have two games in hand.

The T-Birds play the Portland Winterhawks on Saturday at 6:05pm at accesso ShoWare Center. It is the annual Ronald McDonald House Charities of Western Washington & Alaska Hockey Challenge. The T-Birds game will be followed by a local Celebrity and T-Birds Alumni All-Star Game.

Everett went in front 2-1 at 16:39 of the first period on a goal by Wyatte Wylie. Zack Andrusiak and Reece Vitelli had the assists.

Nolan Volcan tied the game 1-1 at 4:36 of the second period. Kukuca moved the puck out of the defensive zone on the right boards to Noah Philp. Philp had the puck at the red line and crossed it to Tyszka who carried it into the offensive zone. Tyszka dropped the puck to Volcan at the top of the circle. Volcan wired a slap shot over Wolf’s blocker for his 20th goal of the season.

The Silvertips too a 2-1 lead on an unassisted goal by Jalen Price at 6:46 of the second.

Kukuca tied it up 2-2 at 11:25 of the third period on the power play. Tyszka gained the offensive zone at center ice and left the puck for Wedman. Wedman skated forward then dropped the puck for Kukuca in the slot. Kukuca took a shot that was blocked by an Everett defenseman. Kukuca got the puck back and beat Wolf on the blocker side for his 22nd goal of the year.