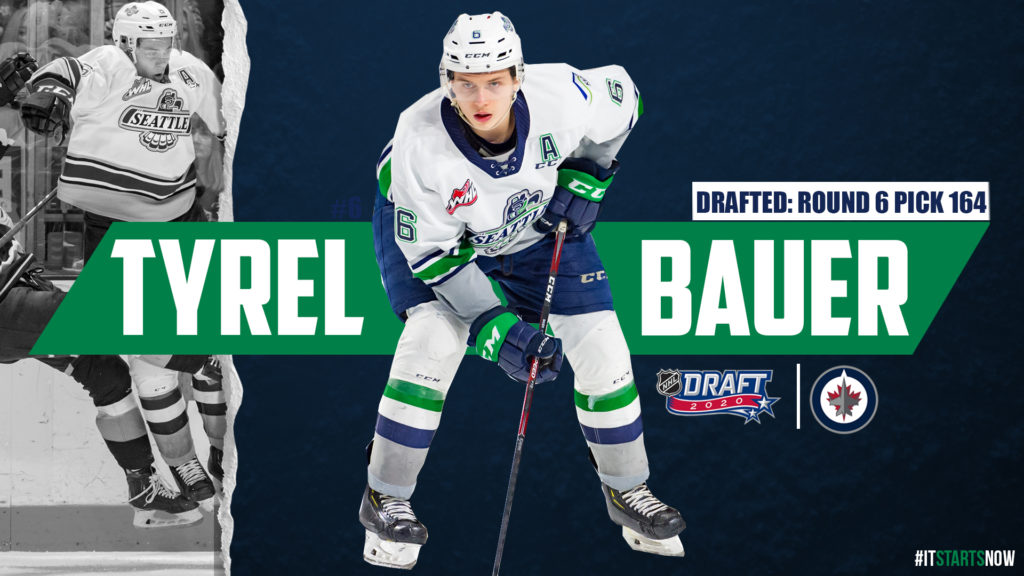 October 7, 2020 – Seattle Thunderbirds defenseman Tyrel Bauer was selected in the sixth round, 164th overall, by the Winnipeg Jets in the 2020 NHL Draft Wednesday afternoon.

Bauer had three goals and 14 assists for 17 points in 60 games last season. Bauer was ranked #166 in the final NHL Central Scouting rankings for the 2020 NHL Draft.

“We’re very excited for Ty and his family,” said T-Birds general manager Bil La Forge.   “Ty’s selection shows that teams saw his value both on and off the ice. The competitiveness and leadership he brings are going to be a huge value to the Jets.”

Introducing the newest member of your #NHLJets…

Picked at 164th overall in the sixth round of the 2020 #NHLDraft! pic.twitter.com/9CLsyeT2iD

“Ty is a very dedicated, high character hockey player. He has worked extremely hard to put himself in this position,” said T-Birds head coach Matt O’Dette. “To see him get rewarded for his efforts is great to see. The Jets made a great pick and are lucky to have him.”

Bauer was named the T-Birds Defenseman of the Year for the 2019-20 season as well as the T-Birds Booster Club Most Popular Player.

In his rookie season Bauer played 64 games and had two goals and 12 assists for 14 points with 91 penalty minutes. He scored his first WHL goal January 27, 2019, vs. Kamloops in a 5-2 win. Bauer was originally selected in the second round, 41st overall, in 2017 Bantam Draft.