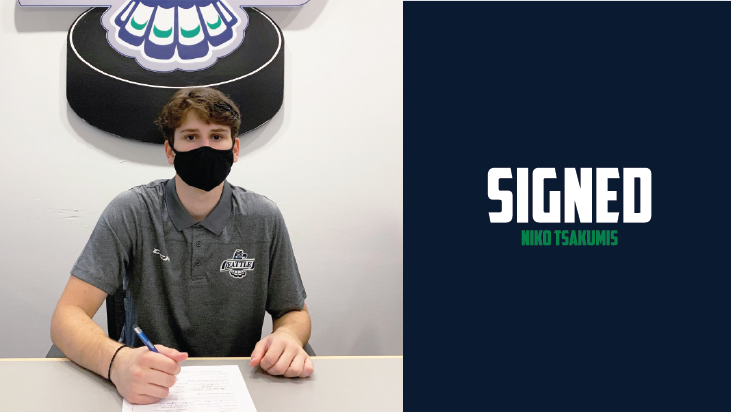 Defenseman was selected in sixth round of 2020 WHL Draft

KENT, September 8, 2021 — The Seattle Thunderbirds have announced defenseman Niko Tsakumis has signed a WHL Standard Player Agreement with the team.

Tsakumis, from Richmond, British Columbia, was selected by the T-Birds in the sixth round, 117th overall, in the 2020 WHL Draft.

“Niko really impressed at camp,” said assistant general manager, Jared Crooks. “His skating and intelligence allows him to defend at a level well beyond his age group.”

Tsakumis played for the Delta Hockey Academy team for the last three seasons and has accumulated 56 points in that timeframe.

By signing a WHL Standard Player Agreement, Tsakumis is guaranteed a WHL Scholarship for every year he plays in the WHL. A player is able to attend any career enhancing institution of his choice, including universities, colleges, technical institutes, trade schools, or any other institution which will help the player achieve his academic and career goals.