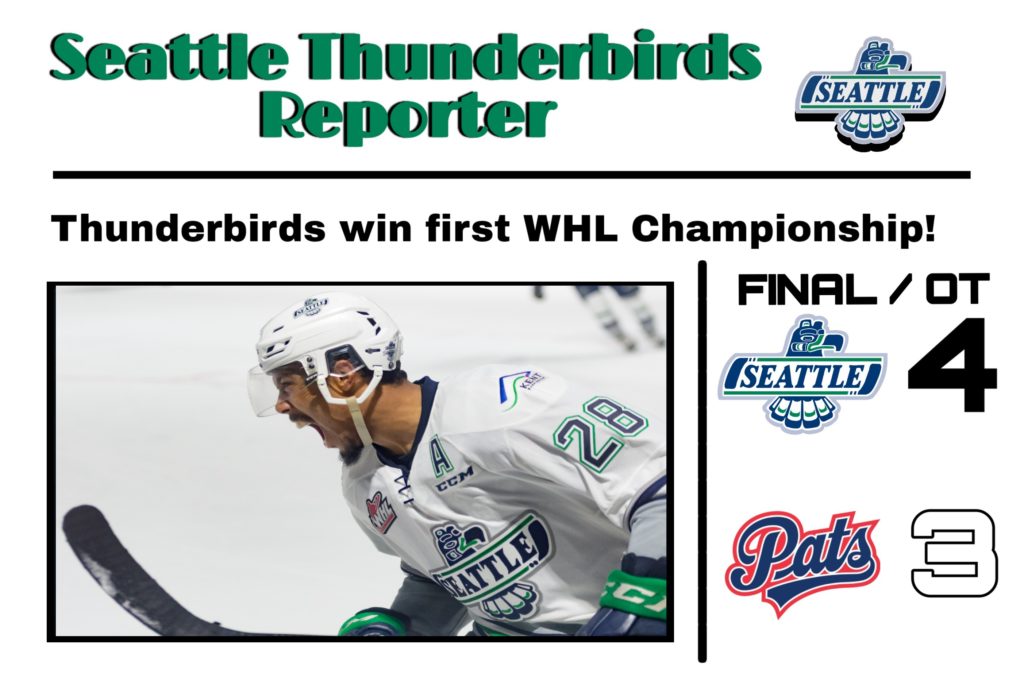 This story on Game 6 was written by Mitch Escandon, a junior at Kentridge High School. The graphics in the story were created RJ Rico a sophomore at Kentwood High School.

Seattle travels back to Regina to win Game 6 of this phenomenal Championship series with 4-3 overtime victory. This triumph lifted Seattle to their first WHL Championship title.

With Seattle leading the series 3-2 Regina needed to bounce back after two straight road losses, fortunately they are back home, and their captain Adam Brooks will play for the first time since Game 1. Seattle will have to keep him in check if they want to claim the title. It will be a high paced and exciting hockey game in a must win game for Regina.

An exciting start to Game 6 as Regina and Seattle both race up and down the ice looking for scoring chances, and Regina is going to get the first one as Alexander True is sent to the penalty box for tripping with 13 minutes left to play in the first period. Regina applies the pressure on the power play as Sam Steel hits the post. On the next attack Connor Hobbs passes to Josh Mahura who dishes the puck to Steel in between the faceoff circles. Steel hits the puck one time and slots it home to the bottom right corner to give Regina the first goal of the night and a 1-0 lead.

Dawson Leedahl is caught for cross checking with about two minutes left in the period and Seattle puts a lot of pressure on firing quite a few shots but Tyler Brown isn’t going down easy as he pushes all shots away.

Seattle outshoots Regina 10-3, but the Pats have the lead in the important stat line. That being a 1-0 lead after 20 minutes of play, with strong defense as well making Seattle work for this game and not giving them anything.

The second period starts with Brooks getting a slashing penalty giving Seattle their second power play of the night less than a minute into the second period. The Pats kill the penalty and stay ahead in this decisive Game 6.

A turnover in Regina’s offensive zone lead to Scott Eansor skating up the ice with the puck and he passes to Sami Moilanen who shows a pass then put the puck home in the far bottom left corner leveling this game at 1-1 about halfway through the second. Moilanen goes for placement over power with the beautiful equalizer.

Another big hit from Turner Ottenbreit gets him charged with a five-minute major and must exit the game just under the halfway point. His penalty is served by Tyler Adams. Brooks and Austin Strand will also serve time for roughing after the play each with a two-minute minor.

Head coach Steve Konowalchuk was asked at the mid-period 90-second break on the Shaw broadcast about how the game plan will change without Ottenbreit in the lineup he said, “Other guys will get some ice time and step up, it’s about what our forwards do with the puck here.”

This will result in an extended powerplay for the Pats. Leedahl adds a second penalty to his name as he goes to the box taking a way Regina’s five on four advantage and each team will be short a skater for the next two minutes. Strand collects another penalty late in the period, but Seattle’s penalty kill will stand tall sending the game tied heading into the third period.

After the second period Ryan Gropp was asked on the Shaw broadcast a few questions specifically on how to go on with the game without Ottenbreit he said, “It’s a hockey play. It happens quite a bit in the game. We have to move past it and have a big third period.” Also asked about the stage they are playing on having a chance to close out and Gropp said, “We try not to think too much about it and play a clean 20 minutes here and come out with a win.” Gropp and the Thunderbirds played a physical and fast second period while closing the gap and evening the score with 20 minutes left to play.

The two teams are each fighting for a winner and True goes to the penalty box giving Regina the man advantage in the third period to hopefully score and extend the series. But Seattle is able to kill the penalty and keep their title hopes alive.

After the power play Jeff De Wit passes to Leedhal who shoots a fast slap shot, but Carl Stankowski is there to turn it away. The puck bounces off of Stankowski to fall perfectly to Josh Mahura who is able to put it in the net to give Regina a 2-1 lead with eight minutes left to play.

A costly turnover near Seattle’s blue line sends Wagner racing down the ice with a one-on-one chance against Stankowski. He scores on a shot to the top of the net and puts Regina up 3-1 with under seven minutes to play and suddenly winning Game 6 does not look good for Seattle.

Not so fast says Gropp, as Ethan Bear passes to Gropp near the left faceoff circle. Gropp fakes a shot to get around a defender and then unleashes a laser to the top right corner. This goal pulls Seattle within one with about five minutes remaining in the game.

Seattle catches a huge break as Chase Harrison of Regina is give a two-minute minor for holding. The power play unit has shined bright for Seattle in this series, but the ‘Birds have yet to capitalize on one tonight. Now would be an opportune time for the T-Birds lethal power play to step up and tie the game.

Bear with an amazing chance in the middle of the ice but he snaps his stick in two while attempting a slapshot, but Keegan Kolesar is there to get the puck, and Brown makes a big save.

Konowalchuk used his timeout to rest his number one line for the final 45 seconds of the power play. The Thunderbirds come out of the timeout passing the puck around the ice keeping the defense on their toes, Gropp passes to Bear at the blue line who will find Kolesar near the right faceoff dot. Kolesar beats Brown to tie the game at three with just under three minutes left. And now Seattle is right back in this game after two quick goals and they are looking for one more to win the championship.

Sixty minutes isn’t enough to decide a winner as the teams each score two in the final period to keep the score even, and there will be overtime. An overtime goal will decide the game, for the Pats a score will mean Game 7 the next night. For Seattle, a goal will mean the first title in team history. A lot is on the line in this extra period of hockey here in Regina.

Overtime starts fast with Stankowski and Brown both having to make big saves as each team is putting everything they have into getting the overtime winner.

A big shot from Nolan Volcan is turned away by Brown and he jumps out to cover up the puck and keep the game tied.

Aaron Hyman makes a pass up the right wing to Kolesar who swiftly drops the puck for Alexander True skating towards the Regina zone. True skates into the right circle, shoots and is denied by Brown, but he follows his rebound and puts the puck past the sprawling Brown, and a defenseman sliding to try and deny the goal, to score the WHL Championship clinching goal.  True wheels off to the left side of the ice, throws down his stick and gloves as he mobbed by all his teammates coming off the bench in celebration. The ice in Regina is covered with helmets, sticks, and gloves as Seattle is celebrating their first ever WHL title.

After Regina salutes their fans Seattle stays on the ice to collect the hardware. First up is Mathew Barzal who is named the MVP of the 2017 WHL playoffs.

Eansor and Barzal skate to center ice where they meet WHL Commissioner Ron Robison and Vice President of Hockey Operations Rick Doerksen, who present them with the Ed Chynoweth Cup.

Eansor hoists the cup first, then hands it to Barzal who skates around the ice holding it up in the air. The rest of the team takes their turn with the cup, enjoying the moment.

Postgame the media was able to meet up with quite a few players. To start off they chatted with True who when asked about his game winning goal said, “Got a good pass from Keegan in the neutral zone…and I just saw the net to be honest and tried to score and I got the rebound and put it in the empty net.”

Both captains shared what they were feeling after winning the championship. The MVP Barzal said, “I don’t know a group of guys that works harder than these guys so to get rewarded like this, it’s unreal.” His counterpart Eansor said, “It pretty surreal…our whole team stepped up from the first line to the fourth line…it’s indescribable, and I’m just so proud of these guys.”

Bear shared his feelings as well, “It’s amazing to see my family here…it just feels amazing. I can’t even describe it.”

Stankowski said, “I can’t believe it, no words.”

Konowalchuk was asked about the performance of his goalie and he didn’t have a lack of words on Stankowski’s outstanding play and said, “He has a good hockey sense and moves well in that net and we wouldn’t be here without him.” Stankowski held the net down for the entirety of the series and stepped up when his team needed a save. A well-earned championship for that young man.

To cap everything off Barzal was asked about his MVP trophy and said, “It’s nice. It’s cool for about five seconds and then you see the big trophy come out and you get to celebrate with these guys.” Barzal showed that celebrating and winning with his team means more to him than the individual awards.

Konowalchuk also made mention about this team’s attitude saying, “Were down 3-1 and everyone thought they were done tonight, but they didn’t…never quit.”

And finally, Stankowski made a comment on the rest of his team, “Our boys they’re relentless they don’t give up I knew they were going to score.” This wasn’t an individual effort by any stretch and that was recognized by the players and coaches. A great group of players and coaches had the answer for Seattle to win their first WHL Championship and they will enjoy this for years to come.