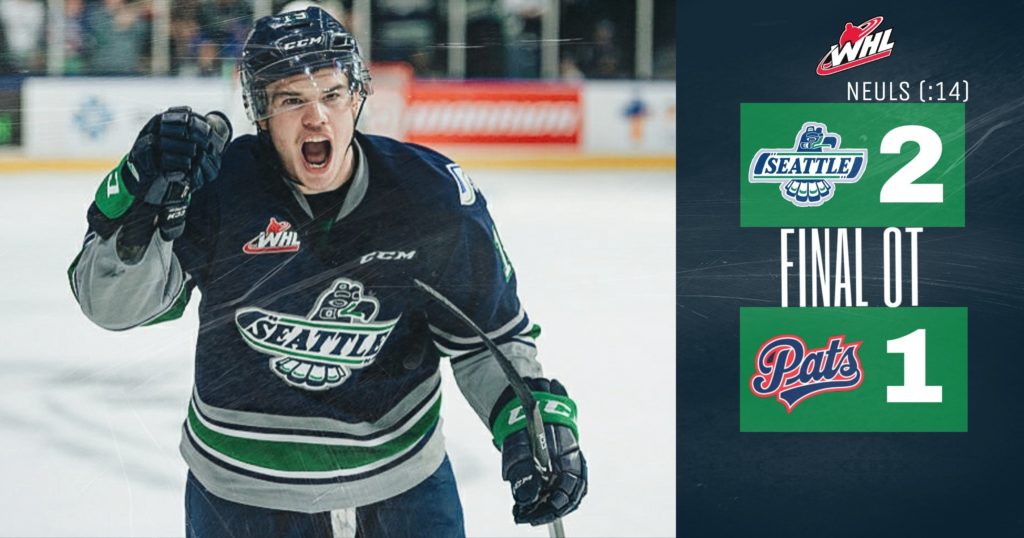 Rushing through the first period of the game, we see a lot of intense contact and strength from both teams, neither scoring any goals, but keeping the pace high. One player in particular, Sam Steel, a leading center on the Pats, was on the T-Birds’ radar when coming into this game. Steel was fierce and had contributed 24 points during the Pats’ playoff run. Another player on the Thunderbirds’ watch, in particular, was Connor Hobbs, a defenseman and specifically a match for the Thunderbirds’ Defenseman, Ethan Bear, who would be making a comeback after not playing in the last three Western Conference Championship games.

Bear was successful in securing Seattle’s first goal, coming in the first five minutes of the second period. This was the first goal of the game and set the tone for the Pats that they needed to step up their game if they wanted the victory.

For the first Pats goal of the game, Connor Hobbs made a close shot at 7:50 in the third period, bringing the score to 1-1. With a very aggressive rest of period three, the game remained tied, seeing both teams working to get a second, and potentially game-winning goal. Neither team captured a goal, sending the game into overtime.

Donovan Neuls wasted no time, scoring the game-winning goal for the Thunderbirds at just 14 seconds in! Donovan reviews the overtime goal in an interview after the game, saying he wouldn’t have been able to do it if it weren’t for Bear “blasting one” towards the net, leaving the puck laying on the ice for a clean shot into the net. Bear spoke on this as well postgame, saying that the teamwork was most important, despite the two making the goals, it was a whole team effort. Bear also explained the importance of “getting back into the groove” after not taking part in three previous games.

In another post-game interview, we hear Thunderbird’s goalie Carl Stankowski credit his team, shouting out Donovan’s game-winning goal and saying “The guys played great in front of me tonight, (Donovan) found a way to bury it. It’s exciting.” We also heard from Thunderbirds head coach Steve Konowalchuk who reflected on his perspective of the win, comparing it to the loss of last year in Game 1 at Brandon saying that “it feels good” and “it’s nice to change the pattern a little bit.” He explained that the win closes out the memory of last year’s loss, admiring the teams’ hard work. As the Thunderbirds gear up for Game 2, we can be sure to see an increase in the aggressive play, as well as look forward to more of the plays we saw in today’s game.