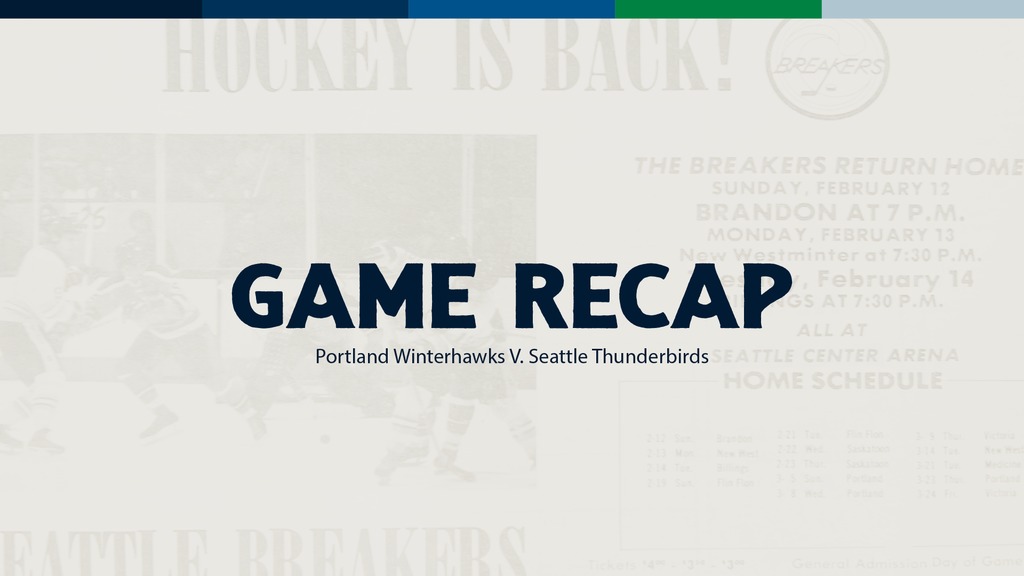 PORTLAND, Ore. –Thomas Milic kicked out 35 shots and the Seattle Thunderbirds knocked off the Portland Winterhawks, 3-1, Wednesday at the Veterans Memorial Coliseum. Kevin Korchinski added two assists as the Thunderbirds improved to 16-4-1-0. The Thunderbirds return home Saturday to host the Victoria Royals at the accesso ShoWare Center.  It is the annual Fred Meyer Teddy Bear Toss game.  Puck drop is 6:05 p.m.

Thunderbirds head coach Matt O’Dette was pleased with the effort, coming off a disappointing loss Sunday in Kennewick. “It was a nice response. Playing in this building, against this team is not easy. Any time you can get two points out of here, you’ve played a good game.”

Seattle scored the only goal of the first two periods when Gracyn Sawchyn jammed home his sixth of the season at 15:20 of the first period. Reid Schaefer and Jeremy Hanzel had the assists.

After a scoreless second period, Seattle added to their lead with a Kyle Crnkovic goal at 7:38 of period three.  Said Crnkovic, “It was a big goal, an amazing pass from Ciona and a good play by Korchinski to get it below the goal line. I was fortunate there wasn’t a lot of traffic around me.” The goal, Crnkovic’s eleventh of the season, stood as the game winner.

The goal came shortly after Seattle killed off Portland’s fourth and final power play of the game. O’Dette said Milic was the key to the Thunderbirds success when shorthanded. “He was dialed. All night long just reading the plays. The PK in general was really good but like the old adage says, your goalie has to be your best penalty killer and he was.”

The Thunderbirds upped the lead to 3-0 when Jordan Gustafson put home his eighth of the season seven minutes later. “The puck was low in the zone and Hurls got the puck to Kevin. He shot it. It hit the end boards and it squirted out to me and I just popped it in the net.”

Korchinski and Ty Hurley had the helpers on the Seattle’s final goal.  With just over three minutes left the Winterhawks pulled goalie Dante Giannuzzi for the extra attacker and Jack O’Brien spoiled Milic’s shutout bid when he knocked home a rebound, but Seattle closed the door the rest of the way.

Kyle Crnkovic’s goal gives him a five-game point streak. He has seven points (4g, 3a) over that stretch.

Jeremy Hanzel extended his point streak to five games (1g, 5a) with his first period assist.

Ty Hurley’s assists was his first point as a Thunderbird. Hurley was acquired in a trade two weeks ago from Swift Current.

Thunderbirds Jet Past Everett
39 mins ago