Thunderbirds Fall Short To Pats in Game 3 of Championship 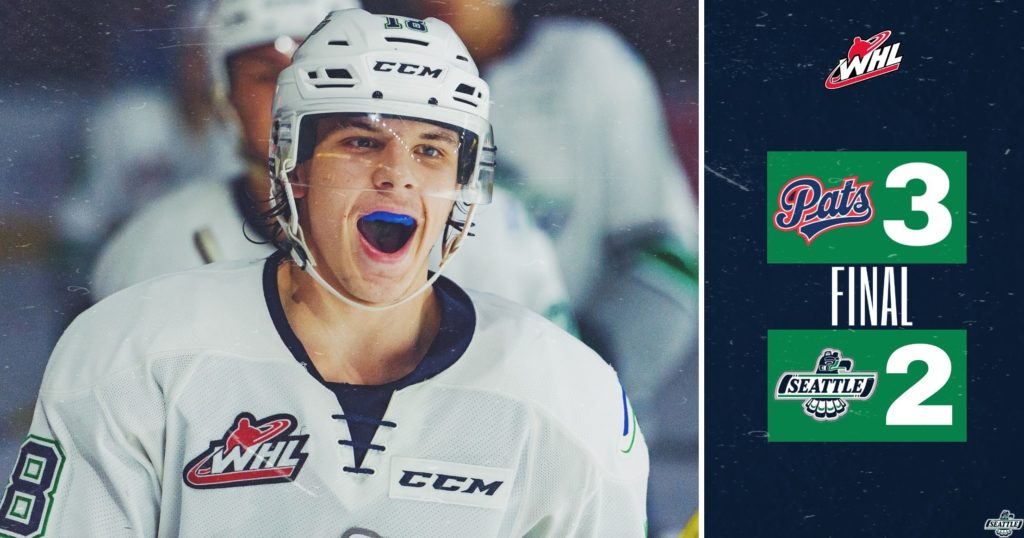 The Seattle Thunderbirds were defeated by the Regina Pats in Game 3, which took place at the accesso Showare Center. 3-2 was the final score of this exhilarating battle, and the Pats are currently leading the WHL Championship series 2-1.

Regina took the lead early in the first period as Connor Hobbs scored a power-play goal at 3:27. Hobbs’s goal was assisted by Josh Mahura and Sam Steel.

Seattle was looking for an opportunity to tie up the game. That opportunity came when Hobbs was called for tripping. Ethan Bear sent a pass to Mathew Barzal, which he launched towards the crease. That set up allowed Alexander True to swat the puck into the net at 7:18 to tie the game with a power-play goal.

The Pats were given another power-play opportunity, and they seized it. Nick Henry assisted on Chase Harrison’s goal, their second power-play goal of the night. At 12:27, Regina led the score 2-1.

However, the Thunderbirds weren’t ready to give up the fight. At 14:48, Seattle’s second goal of the night was scored by Sami Moilanen. True, involved in a hard scrum in the corner, freed the puck and passed it to Tyler Adams, who found Moilanen all alone in front of Regina goalie Tyler Brown and he fired the puck straight past Brown.

The buzzer sounded, ending the first period at 2-2.

The intense action of the second period was initiated by Robbie Holmes’s goal at 4:49, giving Regina a 3-2 lead. Bryan Lockner and Wyatt Sloboshan were credited with the assists. Despite their best efforts, the Thunderbirds still trailed the Pats 3-2 at the end of the second.

During the second period intermission, Keegan Kolesar was interviewed by Stu Walters. Walters asked Kolesar how much dislike and emotion were poured into this series. “There’s a lot,” said Kolesar, “I mean, for a team that you only play once a year, there’s a lot of intensity out here, and there’s a lot of hard battles”. Walters then asked what elevates his game specifically, to which Kolesar responded, “You’re playing for a championship right here, and then from there you go to the Memorial Cup. Not many people can say in their lifetime that they’ve played in the Memorial Cup, or even won a championship”.

Both the Pats and the Thunderbirds were ready to play with vigor going into the third period. Although no goals were scored, both teams continued to play a competitive and physical game.

The 3-2 score was threatened when Sam Steel of the Pats was granted a penalty shot in the middle of the third. Seattle’s 16-year-old goalie Carl Stankowski made a miraculous save, keeping the score at 3-2 and electrifying the crowd.

Stankowski’s save riled up the Thunderbirds, but not enough to take down the Pats in the remainder of the third. The final score of Game 3 was 3-2, giving the Regina Pats a 2-1 series lead.

Stay tuned for Game 4 of this thrilling series on May 10th, 2017 as the Seattle Thunderbirds get closer and closer to a potential WHL Championship title.