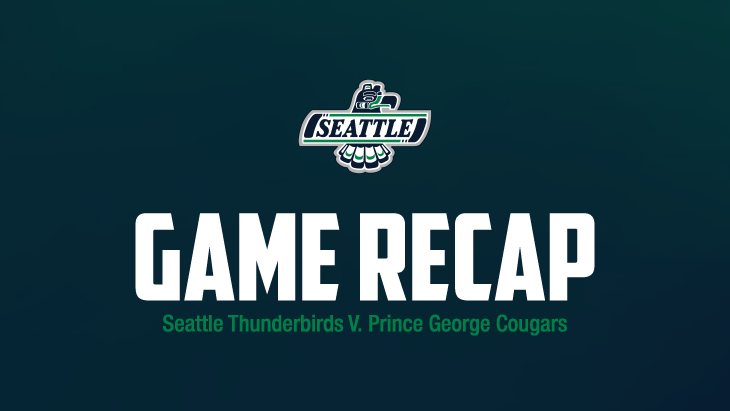 Kent, WA. – Jordan Gustafson scored once and added an assist as the Seattle Thunderbirds skated past the Prince George Cougars, 3-1, Tuesday at the accesso ShoWare Center. The Thunderbirds return to the ice for a pair of games this weekend. They complete their four game homestand this Friday against the Victoria Royals. Game time is 7:05. Saturday the Thunderbirds travel to Spokane to face the Spokane Chiefs.

While the effort wasn’t as complete as their win three nights earlier against Tri-City, T-Birds Head Coach Matt O’Dette was still pleased, especially with the finish. “I thought we played well enough to win the game. I don’t think it was quite as good as Saturday but I thought as the game went on we got better and played the third period the right way and finished the job.”

The two teams traded goals late in the first period. Seattle struck first at 18:18 on a goal from Gustafson. Gustafson won an offensive zone faceoff, then headed to the front of the Cougar net. Jeremy Hanzel snapped a shot on goal and Gustafson tipped it in. Prince George answered 59-seconds later though, on a Carter MacAdams goal.

The T-Birds struck twice in the second period. Jared Davidson potted his seventh of the season at the 8:17 mark. The goal, assisted by Gustafson and Kevin Korchinski, would stand as the game winner.

It was Davidson’s second goal in as many games and came just as a Seattle power play was expiring. “It was a great battle by Gus, and Korchinski made a great pass across the ice. The net was wide open. I just had to put it in.”  Davidson now has goals in seven of his last twelve games. “It was a slow start at the beginning of the year but now things are starting to roll a bit better for me. The pucks starting to bounce a bit better, and the team chemistry has been improving a bunch and I think that’s a key to my success as well.”

Then, with two and a half minutes remaining in the period, Mekai Sanders took a pass from Korchinski, broke in all alone down the right wing and sniped home his seventh of the season to give Seattle a two-goal cushion.

For Korchinski, the two assists give him fourteen through the season’s first 20-games. “I’m naturally a distributer. I’m trying to get some goals too, but I’m just taking what’s given and trying to make the right play no matter what it is.”

There was no scoring in the third period, but the T-Birds outshot the Cougars over the final frame 13-4. Thomas Milic earned his ninth win in goal with a 14-save performance.

Conner Roulette was held off the scoresheet, ending his six-game point streak.

Henrik Rybinski missed his fifth straight game. The T-Birds overage center has been out since suffering an upper body injury late in the second period of a game November 19th in Spokane.

The U17 Capital City Challenge wraps up tomorrow in Ottawa. Two Thunderbirds, Scott Ratzlaff and Sam Oremba, are taking part in the four-team tournament as part of Hockey Canada. Oremba will play for the Gold Medal.