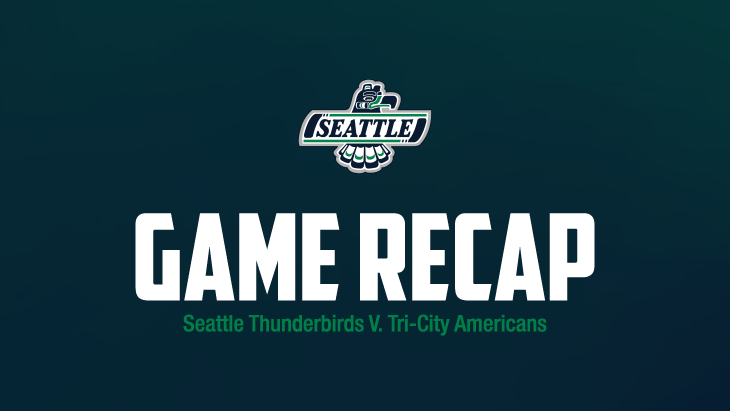 KENNEWICK, Wash – Jordan Gustafson scored twice, Thomas Milic kicked out 19 shots and the Seattle Thunderbirds started a stretch of five straight games on the road with a 5-0 win over the Tri-City Americans Friday at the Toyota Center in Kennewick. The Thunderbirds are off until next Wednesday when they travel down to Portland for a 7:00 p.m. clash with the Portland Winterhawks at the Memorial Coliseum.

Thunderbirds head coach Matt O’Dette was pleased with the outcome knowing there is more his team has to give.  “I thought we played well, it’s a step in the right direction.” O’Dette said there were a couple of moments in the first period that led to odd man opportunities for Tri-City but said those are areas they can clean up. “I think after that we buckled down. We didn’t give them much after that. “

Seattle opened the scoring at 5:50 of the first period. Nico Myatovic put the initial shot on net and Ty Bauer pounced on the rebound, scoring his second of the season. Mekai Sanders picked up the second assist.

Bauer said scoring first was a key to their game plan. “We wanted to get one early. We had a lot of good shifts early in their zone.” On his goal he said it was a matter of being in the right place at the right time. “I just found my way to the front of the net. It’s a play we work on all the time. It was a good play by Nico, the whole line.”

The Thunderbirds extended their lead in the second period thanks to a pair of power play goals from Jordan Gustafson. The first, at 12:44 caromed in off the post. The assists went to Jared Davidson and Kevin Korchinski. The second goal was a one timer, at 17:39, off a cross slot pass from Henrik Rybinski. Korchinski picked up another assist as well.

Gustafson said the two goals were the result of an improving power play. “Our power play’s clicking right now. On the first one I just got it and ripped it.” He says it went off an Americans player before hitting the post and deflected in. “The second one Rybby set up the whole play. He sent it my way and I just kind of finished the job.”

The T-Birds added on two more goals in the third period. Conner Roulette recorded his team leading fourth by knocking home a rebound of a Bauer shot at 8:05. Korchinski earned his third assist on the Roulette goal. Just over three minutes later Matt Rempe potted this third goal of the season, finishing off a cross crease pass from Eric Van Impe with Roulette credited with the second assist.

Comfortably up at that point, O’Dette wanted to see his team finish strong and preserve the shutout for Milic. “We’re always harping on good habits. We want to play a sixty-minute game.” He said the scoreboard shouldn’t matter, “Regardless of the score we want to make sure we’re playing the right way. For the most part, we did that.”

The shutout was the second for Milic in his young Thunderbirds career. On March 26th of last season, he posted a 35-save, 5-0 shutout of Spokane. Both his shutouts have come on the road. He said there was one big difference this time around. “Obviously it’s a bit different circumstance having fans in the building (this time). It made it a little bit more special, being able to quiet down the fans.”

The T-Birds next home game won’t come until Saturday, November 6th when they host the Tri-City at the accesso ShoWare Center. Tickets are available at seattlethunderbirds.com

For Milic this was only his 17th game with the T-Birds but knows he’s going to get the net often this season. “It’s something I’ve been waiting for, for a while. I had a good summer training, just preparing my body to be able to handle a much bigger workload.”

With his first period assist Sanders has points in back-to-back games. He scored a goal and added an assist in Tuesday’s win over Spokane.

Ty Bauer has equaled his goal total from last spring when he scored twice in 23 games. His best season in the WHL was when he scored three goals in 60-games during the 2019-20 season.

Rempe’s goal was his first since he scored twice in the T-Birds season opening win in Portland back on October 2nd.