Thunderbirds are Triumphant in Final Home Game of Series 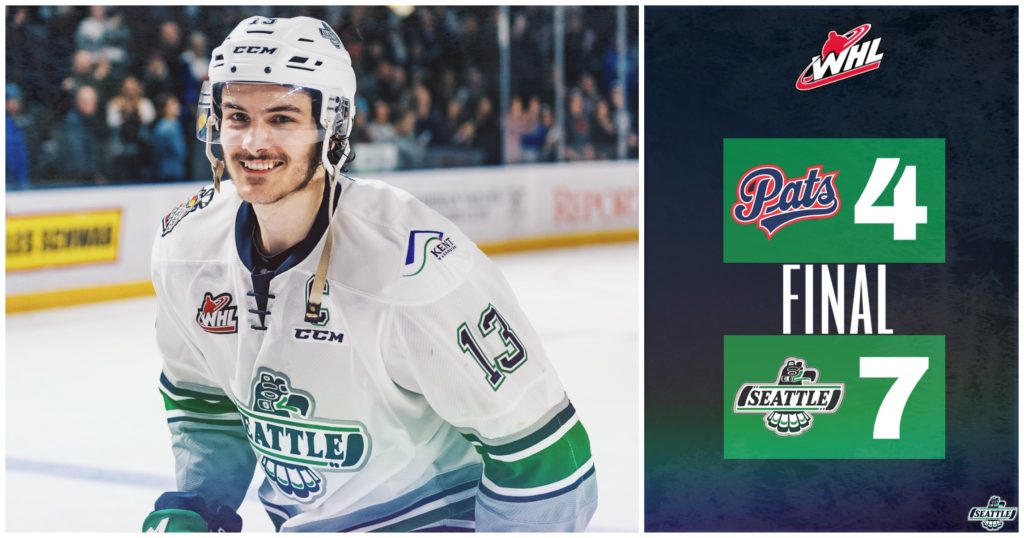 This story on Game 5 was written by Jade Gilson, a junior at Kentlake High School. Jade also produced the graphics you see in the story.

-On May 12, 2017, a record breaking sellout crowd of 6,223 fans were on the edge of their seats to watch the Seattle Thunderbirds take on the Regina Pats at the accesso ShoWare Center in Game 5, the final home game of the WHL Championship for the T-Birds.

Early in the first period, Josh Mahura scored on a slapshot from the blue line at 1:05 for Regina’s first goal. Austin Wagner and Filip Ahl are credited with the assists.

At 3:27, Jeff de Wit fired a shot past goalie Carl Stankowski for the Pats’ second goal of the night. The assists were given to Robbie Holmes and Connor Hobbs.

Despite being down two goals in the first, the Thunderbirds were not going to give up the fight just yet. They were given a golden opportunity for a goal following a penalty on Regina defenseman Sergey Zborovskiy.

Jarret Tyszka set up Scott Eansor for a shot on goalie Tyler Brown. Donovan Neuls shot the rebound off of Brown straight into the net for a power-play goal at 5:09 of the first.

The Thunderbirds were given another power-play opportunity after forward Robbie Holmes was given a minor penalty for closing his hand on the puck.

Ethan Bear sent the puck to Keegan Kolesar, who then passed the puck to Mathew Barzal, who then fired a wrist shot past Brown. This tied up the score 2-2 at 6:01 of the first period.

During the media timeout, Stu Walters on the Shaw broadcast interviewed head coach Steve Konowalchuk. When asked about the team’s resilience after going down early in the first, Konowalchuk said “Well it’s good. We’ve no choice at this point. We’ve got to keep going, keep working, and see what happens here.” Walters then asked if he’s seeing the same determination from Game 4 present and what allows them to create those chances, Konowalchuk replied. “Well, again, we just want to try as much as we can, you know, skating, using our speed.”.

Walters also gave some information from Regina’s coaching staff, saying, “they believe that Carl Stankowski is the hardest working T-Bird”. Their tactic is to send as many players to the front of the net to distract Stankowski so that they have a better shot at scoring goals. Stankowski has been the primary goaltender during the 2017 playoffs after Rylan Toth was injured at the end of the regular season.

The Thunderbirds continued to play a competitive, physical, and determined game for the remainder of the period. At the conclusion of the first period buzzer, the score was 2-2, and Seattle outshot Regina 16-9.

The second period energy in the packed accesso ShoWare Center was even higher than it was in the first period. Fans were ready to watch the action of the tie game unfold.

Seattle was on the penalty kill early in the second after Austin Strand was called for interference.

Dawson Leedahl scored on Seattle’s penalty kill at 9:37 of the second. Connor Hobbs and Josh Mahura assisted on this Regina power-play goal. This gave Regina a 3-2 lead in the middle of the second period.

Seattle did not take this opportunity lightly. They played with vigor in hopes to gain a lead at the conclusion of this intense period.

Barzal scored his second goal of the night, following a flawless set-up by Ethan Bear and Ryan Gropp. This third power-play goal scored at 17:37 put the Seattle Thunderbirds in the lead, 4-3. Seattle outshot Regina yet again in the second 14-8, making the total shots on goal 30-17.

Walters interviewed Barzal following the conclusion of the second. When Walters asked how the team responded going down 2-0 early in the first, Barzal said, “Steve and our leaders were just saying basically we still got, what, 55 minutes left…so, just stay calm, and we just knew we had to get back to playing our game”.

When asked about if their determination in Game 5 has surpassed the determination in Game 4 Barzal said, “I think so. I think the whole game’s kind of been more intense, you know. It’s funny once you get to these playoffs. It’s like, Game 2 is big, but Game 3 is even bigger. Every game is so much bigger than the next one, and that’s what makes it fun.”.

When asked about what it was like feeding off of the energy of the sellout accesso ShoWare Center crowd, Barzal answered, “It was pretty electric when we first came out. It was a heck of an atmosphere; they’ve been great all game and we’re going to need them in the third”.

The action of the third period was initiated by Nolan Volcan’s goal at 2:21. Sami Moilanen wrapped around the goal and sent a pass to Volcan through the crease, which Volcan then hammered into the net. The score was now 5-3 Thunderbirds.

Roughly a minute later, Gropp scored Seattle’s sixth goal of the night. Kolesar passed the puck to Austin Strand. Strand’s shot rebounded off of Brown, which Gropp then shot into the net at 3:55.

The Pats, still trailing the Thunderbirds, were still putting up a fight. At 11:22, Austin Wagner scored Regina’s fourth goal. Wagner was assisted by Johnathan Smart and Wyatt Sloboshan.

The Pats were hungry to regain their lead. They played a competitive game and put up more shots on goal than they had previously, but so far remained unsuccessful. Regina pulled Brown late in the third in hopes of scoring another goal, but with 2 seconds left in the game, Turner Ottenbreit scored Seattle’s seventh goal. His empty-net goal was assisted by Alexander True.

The T-Birds were victorious in this emotional home game at accesso ShoWare Center with a score of 7-4. The shots on goal for Game 5 was 39-37 for Seattle. For Mathew Barzal, Ryan Gropp, Keegan Kolesar, Scott Eansor, Alexander True, and Ethan Bear, this was their last game at ShoWare before they would further their hockey careers in the NHL or AHL after the Championship series.

Stay tuned for the next game of this thrilling championship series at the Brandt Center in Regina. Game 6 will take place on May 14th, 2017.