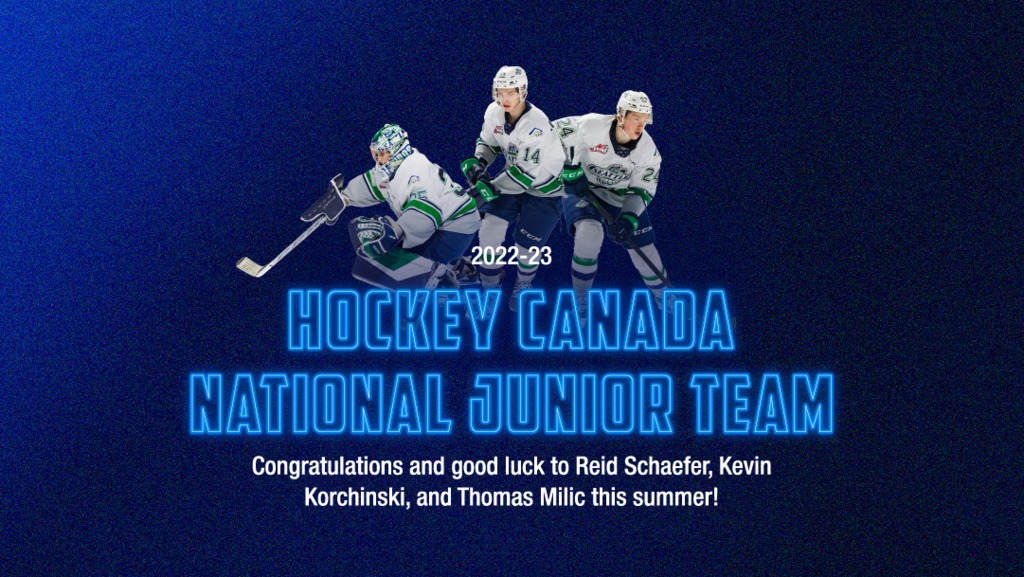 KENT, June 16, 2022 — The Seattle Thunderbirds are pleased to announce the addition of Thomas Milic, Kevin Korchinski, and Reid Schaefer to the 2023 National Junior Team Summer Camp.

Milic, a draft-eligible 18-year-old, helped lead the Thunderbirds to the WHL Championship Series against the Edmonton Oil Kings. During the 2021-22 season he played in 47 games and had a goals against average of 2.44.

“This is a well-deserved recognition for these players,” says General Manager Bil La Forge. “Thomas has shown throughout the season and the playoffs that he is one of the top goaltenders in the CHL. He is a big-game goalie who will thrive under the spotlight of the World Junior Program.”

“Kevin is a highly touted prospect who, despite his age, has produced and played at a very high level throughout the year,” says La Forge. “I am confident that this is just the latest in what will be a long list of accomplishments.”

“Reid has continued his steady growth and development,” says La Forge. “He has shown the ability to play with and against the top players in the CHL.”

The National Junior Team Summer Camp will take place July 23-27 in Calgary ahead of the 2023 IIHF World Junior Championship.

On all three players being announced as invited to the 2023 National Junior Team Summer Camp, La Forge says “[They] have all worked with our development staff and coaches this season and have progressed very well. We are confident that they will continue to do so going forward.”