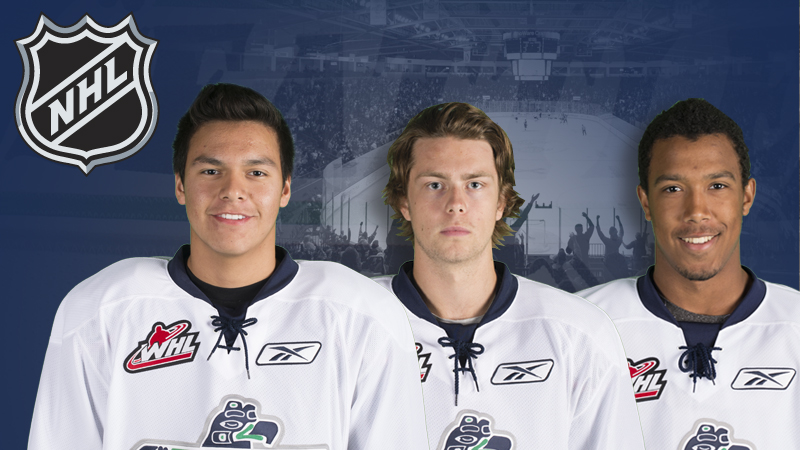 Gropp to Rangers, Kolesar to Blue Jackets, Bear to Oilers

KENT, June 27, 2015 — Three Seattle Thunderbirds were selected Saturday morning at the BB&T Center in Sunrise, Florida, in the second day of the 2015 NHL Draft.

The Rangers selected Gropp in the second round, 41st overall, in the Draft. Gropp was the 11th pick overall on Day 2 of the Draft.

The Rangers made a trade with the Anaheim Ducks to that included the 41st pick. The Rangers received Emerson Etem and the 41st pick in exchange for the rights to Carl Hagelin and the 59th and 179th picks in the Draft.

The Blue Jackets selected Kolesar in the third round, 69th overall, in the Draft.

Kolesar, an 18-year-old form Winnipeg, Manitoba, finished last season with 19 goals and 19 assists for 38 points in 64 games. He did not play in the playoffs due to an injury. Kolesar had two goals and six assists for eight points in 60 games in his rookie season.

The Oiler selected defenseman Ethan Bear in the fifth round, 124th overall, in the Draft.

The Oilers selected Bear in the fifth round, with the 124th overall pick, in the Draft.

Bear was ranked number 97 in the NHL Central Scouting Final Rankings for 2015 Draft eligible players.
Bear won a bronze medal with Team Canada at the 2015 Under-18 World Championship April 16-26 in Zug and Lucerne, Switzerland.

Bear was a member of Team Canada’s Under-18 Team that won Gold at the 2014 U18 Ivan Hlinka Memorial Cup, August 11 to August 16, 2014 in Breclav, Czech Republic and Piestany, Slovakia.

Center Mathew Barzal was taken by the New York Islanders on Friday with the 16th overall pick in the Draft.