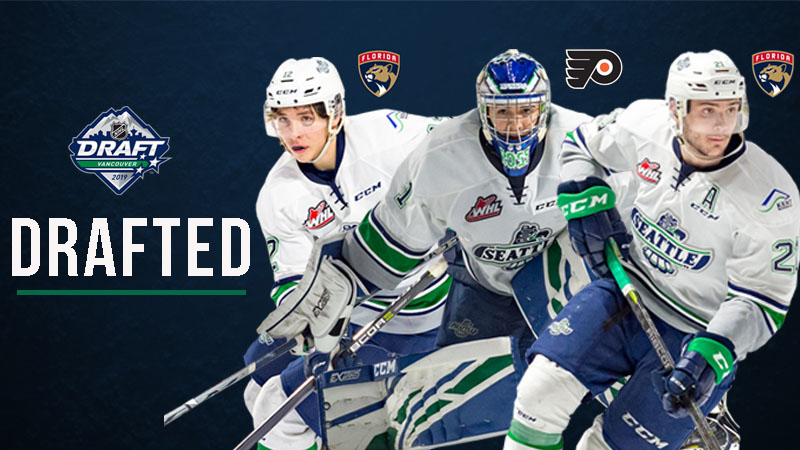 KENT, June 22, 2019 — Right wing Henrik Rybinski, goalie Roddy Ross and center Matthew Wedman were all selected on the second day of the 2019 NHL Draft this afternoon in Vancouver, British Columbia.

“This is a big day for our organization,” said T-Birds general manager Bil La Forge. “The players have worked hard to get selected and our staff has been diligent with their focus on development. It is exciting to look ahead to the future with this group.”

Rybinski was selected by the Florida Panthers in the fifth round, 136th overall.

Henrik Rybinski selected by the @FlaPanthers in the 5th round, 136th overall, of the 2019 @NHL Draft.

Rybinski played 33 regular season games with the T-Birds last season and had seven goals and 28 assist for 35 points. Rybinski, born June 26, 2001, was acquired from the Medicine Hat Tigers on January 4, 2019, for defenseman Aidan Brook, a second round pick in the 2019 Bantam Draft, and a third round pick in the 2020 Bantam Draft. In 47 games combined with the T-Birds and Tigers he had eight goals and 32 assists for 40 points.

“We are really excited Henrik’s hard work and performance were rewarded,” said La Forge. “He was a big part of our second half surge. The best part about Henrik is that he knows the journey is just beginning and he will embrace it.”

Ross was selected by the Philadelphia Flyers in the sixth round, 169th overall.

Goalie Roddy Ross selected by the @NHLFlyers in the sixth round, 169th overall, at the 2019 @NHL Draft.

Back on the clock and we’ve chosen goaltender Roddy Ross with the 169th pick in the #NHLDraft! pic.twitter.com/PwkHgQ1JVm

“Roddy was another big part of our second half surge,” said La Forge. “Loads of credit goes to goaltender coach Ian Gordon. The best is yet to come with Roddy as he continues to refine his craft.”

Wedman was selected by the Florida Panthers in the seventh round, 199th overall.

Center Matthew Wedman selected by the @FlaPanthers in the seventh round, 199th overall, at the 2019 @NHL Draft.

“We are so proud of Weds,” said La Forge. “He is proof that if you keep working towards a goal, it can be achieved.”

Congratulations to former T-Bird Dillon Hamaliuk on being selected by the @SanJoseSharks in the second round! 👏🏼👏🏼 https://t.co/wOC2avDDpj