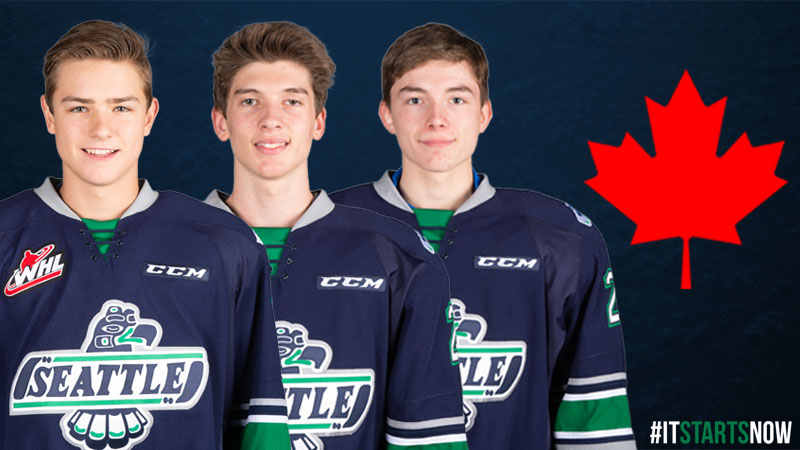 KENT, June 25, 2019 — Seattle Thunderbirds general manager Bil La Forge today announced center Kai Uchacz, left wing Conner Roulette, and goalie Thomas Milic have been named to the Selection Camp for Canada’s U-17 team that will be competing at the World Under-17 Hockey Challenge.

The Selection Camp is July 19 to July 26 at the Markin MacPhail Centre at WinSport’s Canada Olympic  Park in Calgary, Alberta.

“This is great recognition for Kai, Conner and Thomas,” said La Forge. “This experience will help them grow as hockey players and we know they will excel at the selection and look forward to watching them compete.”

Uchacz was the team’s first round selection, 10th overall, in the 2018 Bantam Draft. This past season he appeared in five regular season games and had a goal and an assist. Uchacz spent the majority of the season with the Okotoks Oilers in the AMHL and had 16 goals and 15 assists for 31 points in 28 games.

Uchacz played for Team Alberta in February at the Canada Winter Games and had two goals and six assists in six games. Uchacz signed a WHL Standard Player Agreement with the team on August 20, 2018.

Roulette was the team’s second round selection, 34th overall, in the 2018 Bantam Draft. Last season Roulette played in one game as a T-Bird. He played 43 games with the Winnipeg Thrashers in the MMHL last season and had 41 goals and 47 assists for 88 points.

Roulette played for Team Manitoba in February at the Canada Winter Games and had four goals and four assists in six games. Roulette signed a WHL Standard Player Agreement with the team on June 5, 2018.

Milic was the team’s third round selection, 51st overall, in the 2018 Bantam Draft. This past season he played 20 games for the Burnaby Winter Club in the CSSHL and had a 2.41 goals against average and a .908 save percentage.

Milic played for Team British Columbia in February at the Canada Winter Games and appeared in four games with a 4.03 goals against average and a .902 save percentage. Milic signed a WHL Standard Player Agreement with the team on August 28, 2018.

Uchacz, Roulette and Milic are three of the 112 players invited by Hockey Canada to the selection camp. The invitees include 12 goaltenders, 36 defenseman, and 64 forwards. These players will be monitored through the early weeks of the 2019-20 season before 66 players are chosen for Team Canada White, Team Canada Black and Team Canada Red.

The 2019 World Under-17 Hockey Challenge takes place from November 2 to November 9 in Medicine Hat, Alberta and Swift Current, Saskatchewan. Eight teams will compete over the seven-day tournament. Team Canada Black, Team Canada White, the Czech Republic and United States will play in Group A. Team Canada Red, Finland, Russia and Sweden will comprise Group B.

The T-Birds announced their home opener for the 2019-20 regular season on Monday. They will face the Kamloops Blazers on Saturday, September 21, at accesso ShoWare Center at 6:05pm. 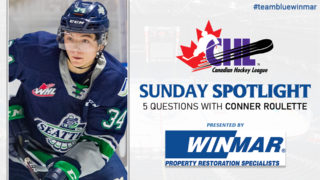 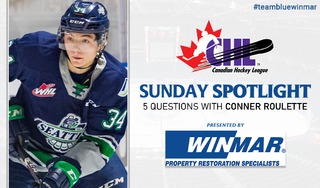