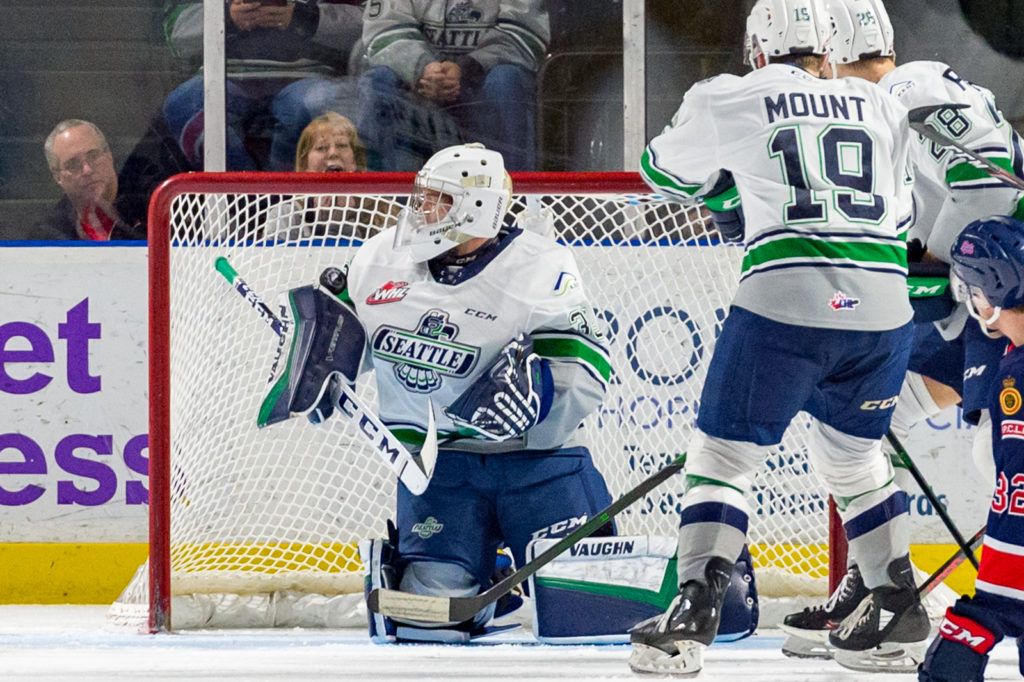 KENT, January 17, 2020 — It was a debut to remember for Seattle Thunderbirds goalie Thomas Milic Friday night at accesso ShoWare Center. Milic made 23 saves in his first career start to lead the Seattle Thunderbirds to a 4-2 win over the Regina Pats in front of 5,532 fans.

Milic was called up to the team Thursday from the Burnaby Winter Club Prep team in the CSSHL. Milic was selected by the T-Birds in the third round of the 2018 Bantam Draft and signed a WHL Standard Player Agreement with the team on August 28, 2018.

Milic was strong throughout the game, especially in the second period when the Pats took a 2-1 lead and were pressing the play.

Keltie Jeri-Leon had two goals and Lucas Ciona had a goal and an assist in the game.

Seattle took a 1-0 lead on Ciona’s second goal of the season. Luke Bateman took a slap shot from the mid-point that rebounded off Regina goalie Donovan Buskey to the right of the net. Jared Davidson banged at the puck and it popped into the air and through the crease. Ciona swung and tried to knock the puck into the net but missed. The puck hit the ice and Ciona backhanded it past Buskey as the goalie attempted to making a sprawling save.

Seattle came storming back in the third period to score three goals and win the game.

Bateman took a shot from the right point and the puck deflected behind the net. Henrik Rybinski got the rebound and made a backhand pass to Keltie Jeri-Leon in the low slot. Jeri-Leon snapped the puck over Buskey’s glove at 2:41 to tie the game 2-2.

Jeri-Leon gave the T-Birds a 3-2 lead at 9:43 of the third. Cade McNelly got a rebound to the left of the Seattle net and passed it to Conner Roulette moving up the left wing. At the Seattle bench Roulette crossed the puck to Jeri-Leon on the right wing. Jeri-Leon carried the puck into the zone, made a toe drag move around the defenseman and ripped a wrist shot over Buskey’s glove for his team leading 19th goal of the season.

Simon Kubicek added an insurance goal at 13:15 of the third. Ciona passed the puck from the right corner behind the net to Max Patterson. Patterson skated into the left circle with his head up. Patterson spotted Kubicek pinching down from the right point and hit him with a pass. Kubicek beat Buskey over the blocker with a wrist shot for his fifth goal of the season.