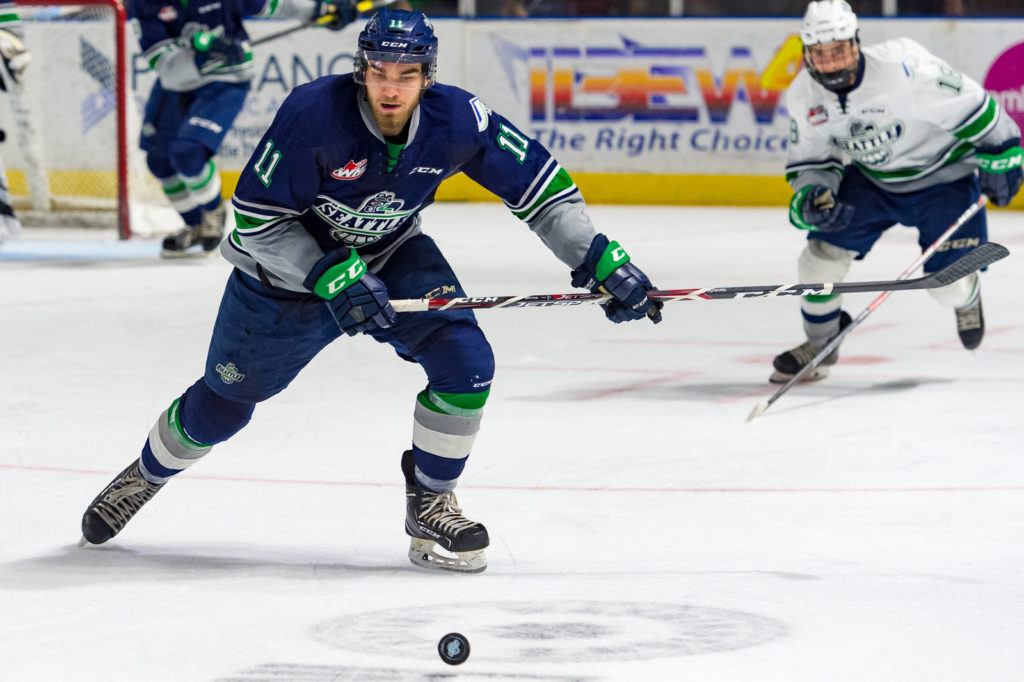 KENT, August 24, 2019 — Graeme Bryks had two goals and Henrik Rybinski and Conner Roulette each had three assists to help lead Team Blue to a 6-3 victory over Team White in the annual Blue White game that ends Training Camp.

The T-Birds focus now switches to preparation for the Everett Preseason Tournament over the Labor Day weekend. The T-Birds will play three games at the Everett preseason tournament, the first on Friday, August 30, at 11:30am against the Vancouver Giants.

White took a 1-0 lead at 8:08 of the second period. White’s Baron Thompson played the puck up the right wall in the defensive zone and Brecon Wood was able to force a turnover by the Blue defenseman. Wood skated up the left wing on a partial breakaway. With a defenseman closing the angle Wood took a shot from the left circle that beat Blue goalie Roddy Ross.

Jared Davidson gave White a 2-0 lead 1:42 after the goal by Wood. Thompson had the puck on the right wing and made a sneaky pass to Davidson in slot. Davidson beat Ross with a shot on the blocker side.

Blue cut the White lead to one at 10:45 of the second on a goal from Winter Wallace. Conner Roulette controlled the puck with his skates and passed it to Wallace in the low right circle. Wallace one timed Roulette’s pass and beat Creasy five-hole.

Blue tied the game 2-2 1:48 into the third period. Graeme Bryks put back a rebound from an Andrej Kukuca shot from the slot for his first goal. Zach Ashton had the second assist.

Matthew Rempe put Blue in front 3-2 at 5:43 of the third. Henrik Rybinski had the puck behind the net and fed Rempe to the right of the net. Rempe beat Creasy over the glove from in tight. Roulette had the second assist.

Brendan Williamson scored at 10:01 of the third to make it a two-goal lead for Blue. Defenseman Tyson Perkins took a shot from the left point with Williamson in the slot. Williamson tipped the Perkins shot past Creasy. Wallace got the puck to Perkins for his second point of the game.

Keltie Jeri-Leon scored 11 seconds after Williamson to White’s third goal of the game. Jeri-Leon beat Blue goalie Thomas Milic from the slot for an unassisted goal.

Kukuca got Blue the two-goal lead back at 16:08 of the third. Roulette put a backhand shot on goal that hit the cross bar and came to Kukuca in the low slot. Kukuca snapped the puck into the net. Williamson had the second assist.

On a White power play they pulled the goalie for an extra attacker. Bryks was able to hit the empty net from the neutral zone to secure the win for Blue. Rybinski and Ashton had the assists.

The T-Birds start the preseason at the Delta Hotels Preseason Classic in Everett. They will play their first game at the Classic against the Vancouver Giants on Friday, August 30, at 11:30am. Classic play will continue the following day as the T-Birds face the Tri-City Americans on August 30 at 3pm. The Classic ends for the T-Birds on Sunday, September 1, as they play the Everett Silvertips at 7pm.