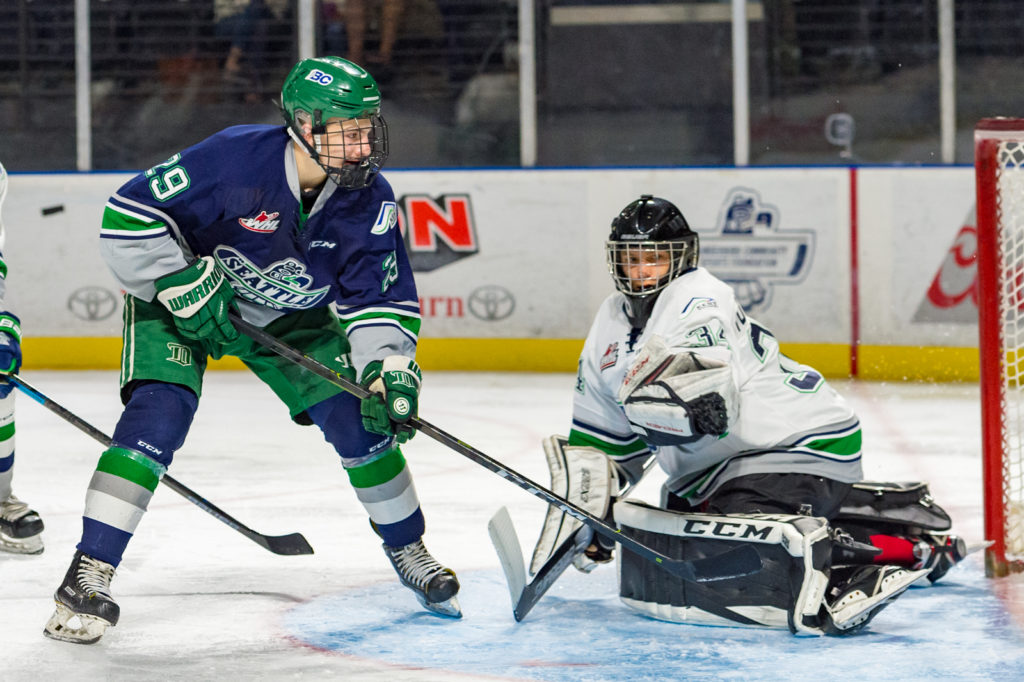 The annual Blue White Game that ends Training Camp starts at 6pm at accesso ShoWare Center and is open to the public free of charge. This game features T-Birds veterans and prospects in a full length 60-minute game. Teams will be wearing T-Birds blue and white jerseys.

Andrew Beres gave White a 1-0 lead at 2:02 of the first period off the rush. Beres came down the left wing and beat Blue goalie Matthew Malin. Aidan Beck had the only assist.

Blue tied the game 1-1 at 9:37 of the first. Mateo Mrsic fed the puck from behind net to Tate Schofer in the low left circle. Schofer beat Toussaint over the glove.

Blue went in front 2-1 at 15:59 of the first. Daniel Rosenfeld took a wrist shot from the left point with traffic in front of Toussaint. The puck deflected behind the White net where Daniel McCarragher got to it. McCarragher found Owen Kim in the slot and he went high on the goalie.

Mrsic scored at 6:14 of the second period to make it a 3-1 Blue lead. Schofer and Nico Myatovic had the assists.

Daniel McGarragher set up Blue’s fourth goal at 9:26 of the second. McGarragher backhanded the puck from the right of the net into the crease. Defenseman Daniel Rosenfeld had pinched down and put the puck past DePape for the goal. Simon Rokhlin’s shot hit DePape’s pad and went to McGarragher.

Carter Yarish made it a 5-1 Blue lead at 14:21 of the second. Yarish took a pass from Spencer Penner on the right wing and skated into the offensive zone. Yarish toe-dragged around a White defenseman, cut through the low slot and beat the goalie with a backhand shot high.

White cut the Blue lead to three at 14:49 of the second. Connor Gourley skated hard down the right wing, powered to the net and made Venne make a left pad save. Reid Schaefer was chasing the play and he put the rebound past Venne. Vlad Severin had the second assist with the up-ice pass to Gourley on the right wing.

Blue outshot White 12-9 in the second period and led 29-20 in total shots after two periods.

The T-Birds start the preseason at the Delta Hotels Preseason Classic in Everett. They will play their first game at the Classic against the Vancouver Giants on Friday, August 30, at 11:30am. Classic play will continue the following day as the T-Birds face the Tri-City Americans on August 31 1 at 3pm. The Classic ends for the T-Birds on Sunday, September 1, as they play the Everett Silvertips at 7pm.