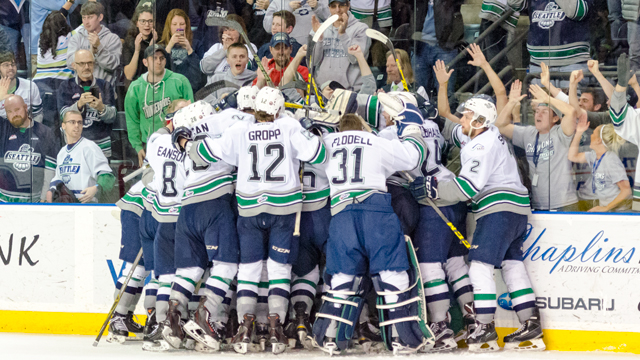 The T-Birds swept the best-of-seven Western Conference Championship series against the Rockets 4-0.

Matthew Wedman scored the game-winning goal at 7:52 of the second overtime. Ryan Gropp had the puck along the left boards and fed Wedman in the neutral zone. Wedman beat a Kelowna defender wide on the left, cut through the low slot left to right, and tucked the puck past Kelowna goalie Michael Herringer’s outstretched left pad. Jared Hauf had the second assists on Wedman’s first goal of the playoffs.

The T-Birds came back from two goals down with 1:15 left in the third period to tie the game 4-4 and force overtime.

The T-Birds pulled goalie Landon Bow with over two minutes left in the game and were able to capitalize twice.

Ethan Bear beat Herringer with a wrist shot with 1:15 left in the third to cut the Rockets lead to one goal. Jerret Smith passed the puck to Bear who took his shot with traffic in front of the goalie. Mathew Barzal had the second assist on the goal.

The T-Birds tied the game 4-4 with 2.7 seconds left in the game. Bear took a slap shot that Herringer stopped. But the puck came off the goalie just to his left and Keegan Kolesar, standing on top of the crease, swept the puck into the net.

Kelowna scored two goals 25 seconds apart in the first period to take a 2-0 lead. Rodney Southam scored at 13:50 on a wrist shot from the right circle. Tyson Baillie snuck a wrist shot through Seattle goalie Landon Bow’s leg at 14:15 of the opening period.

Seattle cut the Rockets lead to one goal 46 seconds into the second period. Scott Eansor had the puck in the left corner. Eansor spotted Ryan Gropp coming off the bench and into the slot and hit him with a pass. Gropp beat Herringer low for his third goal of the playoffs.

The Rockets took the two-goal lead back at 4:59 of the second on a goal from Justin Kirkland. Lucas Johansen had the only assist on the goal.

Bear put the T-Birds back within one goal at 15:08 of the second.  Kolesar won the puck on the right boards to Mathew Barzal who carried the puck behind the Kelowna net. Barzal centered the puck to Bear in the slot. Bear beat Herringer with a hard wrist shot for his fifth goal of the playoffs.

With the assist Barzal is now the franchise leader in playoff assists and points passing former Patrick Marleau. In 28 career playoff games Barzal has 10 goals and 21 assists for 31 points. The 21 assists and 31 points are one ahead of Marleau in each category.

The T-Birds outshot the Rockets 17-9 in the second period and led 33-17 in shots after two periods.

Kirkland put the Rockets back up by two goals with a power-play goal with 6:10 left in the third period. Baillie and Calvin Thurkauf had the assists.

The T-Birds two goals with 1:15 came after they killed off a goaltender interference penalty.

The T-Birds outshot the Rockets 9-1 in the second overtime and 75-32 in the game.