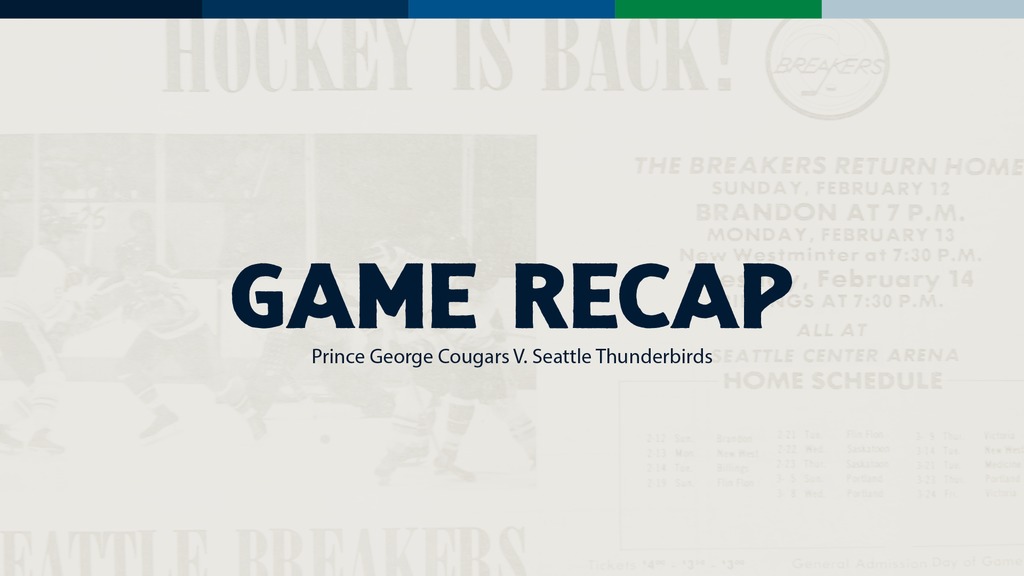 PRINCE GEORGE, B.C. –The Seattle Thunderbirds franchise best, nine game winning streak to open the season came to an end with a 4-1 loss to the Prince George Cougars Saturday at the CN Centre. The Thunderbirds return home Tuesday to host the Cougars at the accesso ShoWare Center. Game time is 7:05 p.m.

“We’ve gotta keep things in perspective,” said head coach Matt O’Dette. “We’re disappointed that the streak has ended but overall, if you were to ask us if we would be happy with 9 and 1 to start the season, I think we’d say yes.”

For the second straight game against the Cougars, the Thunderbirds fell behind, 1-0, after one period. “We were certainly out of sync,” said O’Dette. “We weren’t executing very well, self-inflicted damage, which led to us being on the wrong side of the flow of the game. We were just out of sorts.”

Seattle did forge a 1-1 tie when Jared Davidson scored at 12:06 of the second period, assisted by Kyle Crnkovic. But Prince George answered less than two minutes later to take the lead for good.  “We didn’t execute our game plan,” commented O’Dette. “They’re pretty opportunistic. We would carry some of the play and then have a breakdown and it’s in the back of our net.”

The Thunderbirds had a chance to tie with a power play opportunity six minutes into the third period. But Cougar’s goaltender Ty Young kept Seattle at bay with a couple of acrobatic saves.  Seattle kept pressing for the equalizer, but the Cougars got another goal in transition to push the lead to 3-1 then added an empty net goal in the final minutes to seal the win.

“There’s a certain style of play that works for us,” O’Dette said. “Tonight, we certainly didn’t have that formula, that style of play. There’s a reason we got as far as we did last season, and it wasn’t by stepping on the ice and relying on outskilling everybody. We have to get back to that and solidify that.”

Jared Davidson finished the weekend with three goals, and one assists. He now has goals in six straight contests.

With his assist on the Davidson goal, Kyle Crnkovic stretched his point streak to start the season to ten games.

Despite the loss the Thunderbirds outshot the Cougars 32-26

Reid Schaefer played in his 100th WHL game Saturday, all with the Thunderbirds.