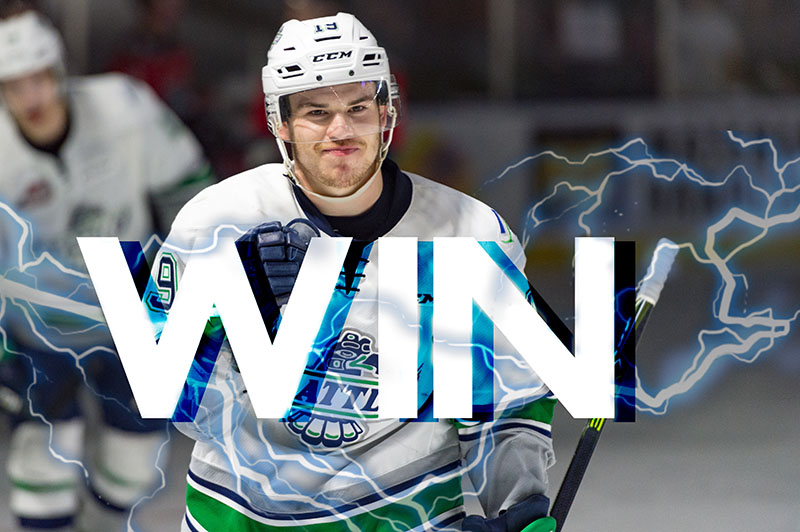 This story on Game 1 was written by Mitch Escandon, a junior at Kentridge High School. Emma Hartvickson, a senior at Kentlake High School, produced the graphics you see in the story.

The Seattle Thunderbirds and the Regina Pats are set to face off in the 2017 WHL Championship Final. The two strong teams lived up to the hype in Game 1 of the series, even providing free hockey for the fans, the Thunderbirds outlasted their foes with a 2-1 overtime victory.

Seattle’s young goaltender, Carl Stankowski, played only nine regular season games but has flourished in the playoffs with a 12-2 record. The ‘Birds come into this matchup with a solid 6-1 road record in these playoffs, hoping to improve that impressive stat.

This Ethan Bear goal graphic by Emma Hartvickson, a senior at Kentlake High School, was used on the T-Birds social media platforms during the YouTube broadcast of Game 1 of the 2017 WHL Championship.

With Ethan Bear back in the lineup after missing the last three games Seattle looks to stand tall in the back and hold Regina’s explosive attack to as few goals as possible. Bear, being from the area said, “It’s a good feeling you know, every time I get around here, they show me some support… when you come out here and play it’s really special.”

Head coach Steve Konowalchuk had this to say about his star defenseman Ethan Bear, “He’s a good player… a good leader and a big part of our team.”

Proving having Bear ready to go for the final will aid the T-Birds.

The start of Game 1 provided great hockey right out of the gate, at 17:17 Stankowski comes out of his net to make a save on a Regina attack, the rebound falls to Regina’s Austin Wagner, who tries to tap in the easy shot. Only to see Stankowski reach back with the blade of his stick to pick the puck off his line and cover it up, to rob Regina of taking the opening goal late in the first period.

Shortly after, with just under a minute left in the period Austin Strand gets penalized for tripping to interfere a promising chance for Regina. Regina’s powerplay has not been at its peak in its recent series only scoring on three of their 18 chances, and that didn’t change as Seattle stood tall defensively and killed the powerplay.

The first twenty minutes of the 2017 WHL Championship sees no goals, fortunately there wasn’t a lack of excitement, from big hits to a multitude of great saves by Carl Stankowski, and a flurry of chances on net. Regina led Seattle in shots in the period with an 11-8 advantage. Regina will take a minute and change of powerplay time into the start of the second period.

Coming out of the dressing rooms Regina had a minute of powerplay time but it was Seattle who delivered a short-handed chance, Scott Eansor stole the puck deep in Regina’s defensive zone. After a few dekes the puck is pushed aside by Regina’s goalie, Tyler Brown.

Three minutes and 27 seconds into period number two Turner Ottenbreit lays a massive hit on Adam Brooks, Regina’s captain. Robbie Holmes isn’t happy with Ottenbreit’s hit and stands up for his teammate, both skaters receive two-minute minors for roughing opening the ice up with 4-on-4 play. Only a minute into the roughing penalties Connor Hobbs of Regina gets tagged with a holding penalty giving Seattle their first powerplay of the game. Seconds later Ethan Bear rips a shot from on-top of the right faceoff circle beating Tyler Brown in the top left corner. Ethan Bear scores off the assist from Mathew Barzal and Ryan Gropp at 4:55 in the second period. Seattle leads Regina 1-0.

After the Bear goal a flurry of penalties occur, starting with Nick Henry who pushes the puck above the glass at 7:45 in the second period giving Seattle another powerplay, which their lethal powerplay unit looks to score on. Jeff de Witt follows suit of teammate Nick Henry and causes a delay of game penalty putting Seattle on the powerplay once again. Seattle’s Sami Moilanen evens the edge with a checking from behind penalty creating 4-on-4 hockey. As the horn sounds ending the period Bear’s goal stands to be the only difference. Tensions are going to be high going into period three after Turner Ottenbreit sent Regina’s captain to the locker room off a huge hit.

After the second period Mathew Barzal said in an intermission interview, “It’s the finals, you don’t play these guys too much so you have to establish that hate for a team… it’s been a tough first forty here and I’m sure the last twenty won’t be any different.”

Seattle starts the third period with a wealth of chances and gets a powerplay at 2:09. Unfortunately, the ‘Birds can’t find the back of the net. Austin Wagner’s short-handed chance didn’t help, luckily Stankowski comes up with another amazing save proving he is up for the task.

Physical play has proved to be a theme of this exciting game and the third period confirmed that with an early interference penalty Regina’s Sergey Zborovskiy. Near the midpoint of the period Nolan Volcan and Bryan Lockner both received roughing penalties. The 4-on-4 play with extra ice didn’t see any goals. Shortly after the lone goal scorer to this point, Ethan Bear, got caught with a hooking penalty that put Regina on the powerplay. Regina in need of a late goal to equalize found the answer at the hands of Connor Hobbs who hit from close range off the assists from Dawson Leedahl and Sam Steel. Regina ties the contest at 1-1 at 12:11 in the period. The teams continue to trade shots and saves for the final eight minutes but no one could find the winner, as the horn sounds and sends the game to overtime.

Both teams are eager to find the winner and take a series advantage, Seattle starts out hot winning the puck in the neutral zone where Bear hits a slapshot from where he scored earlier that hits the cross bar. The rebound falls nicely to Donovan Neuls who taps home the overtime winner, the assists credited to Mathew Barzal and Bear. Neuls ends the game only 14 seconds into overtime and the Thunderbirds flood the ice to celebrate the big Game 1 win.

Neuls broke down the goal post game, “Bear blasted one and it hit the bar and I saw it laying there so I just poked it in, and it was a great feeling.” Seattle winning on the road steals home-ice advantage and the T-Birds now lead the series 1-0!

Ethan Bear had an impressive performance in his first game back after missing three said, “I felt like I was fine…and once I was able to get into my groove, I was confident. I was shooting and moving the puck up well.” And he was shooting well, netting the opener for Seattle along with an assist on the winner.

Here’s what head coach Steve Konowalchuk had to say about Bear being back in the lineup, “Pretty impressive. He looked like he did not miss anytime. Played with a lot of confidence and you can see his confidence building… and he’s a real valuable player for us.”

As a whole Seattle delivered a gritty road win backed by 31 saves from Carl Stankowski who stood as a brick wall in net letting nothing past him. Stankowski postgame commented on how he stays composed as a young, smaller player in net, “It’s just one puck at a time. I don’t focus on the whole game.” This was Stankowski’s first WHL Championship game and he played like he has been here before, leading his team to victory and picking up first star honors.

Postgame Donovan Neuls was asked where his goal ranked among his favorites and he answered, “That’s probably number one. Not too often do you get to score an overtime winner in the WHL finals.”

After heartbreak last year in the WHL Championship, including three overtime losses, Seattle saw themselves looking down a similar pathway to which Konowalchuk said, “Its certainly nice to get a win here and really close out that memory of last year.”  Winning 2-1 in overtime Seattle takes the series lead 1-0.