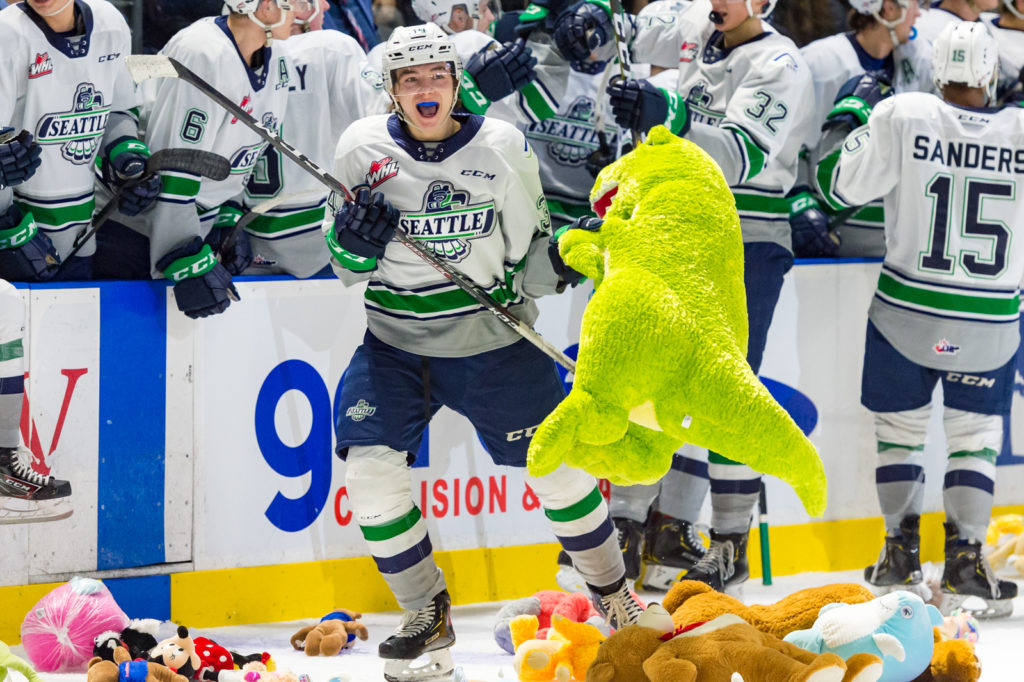 KENT, January 11, 2020 — Conner Bruggen-Cate, Keltie Jeri-Leon and Conner Roulette each had a goal and an assist Saturday night at accesso ShoWare Center to lead the Seattle Thunderbirds to a 4-3 win over the Everett Silvertips on Fred Meyer Teddy Bear Toss Night presented by WARM 106.9.

Seattle goalie Roddy Ross made 16 saves in the first period and was the best T-Birds on the ice in the first 20 minutes.

Seattle quickly came right back and tied the game 1-1 on the power play at 19:05. Andrej Kukuca passed the puck from the right wall to Simon Kubicek at the mid-point. Kubicek took a slap shot with traffic in front of Everett goalie Dustin Wolf that rebounded off the goalie and into the air. Conner Roulette was to the right of the net and batted the puck out of the air and into the net.

After the goal the sellout crowd, and biggest of the season, of 6,160 at accesso ShoWare Center threw teddy bears and stuffed animals onto the ice. The game is the annual Fred Meyer Teddy Boss presented by WARM 106.9. The teddy bears and stuffed animals were collected by the WARM 106.9 Teddy Bear Patrol and will be given to police and fire departments and local hospitals to give to children in time of emergency and crisis.

The @Fred_Meyer Teddy Bear Toss presented by @Warm1069 is awesome.

Roulette has a four-game goal streak. Kukuca has a six-game streak of six goals and seven assists.

The Silvertips took a 2-1 lead on a goal by Gage Goncalves at 19:50 of the first period.

Max Patterson tied the game 2-2 for the T-Birds at 14:01 of the second period, one second after a power play ended. Conner Bruggen-Cate passed the puck from the right corner through the crease to Patterson in the low left circle. Patterson one-timed the pass and beat Wolf on the stick side. Keltie Jeri-Leon had the second assist sending the puck to Bruggen-Cate at the goal line.

Bruggen-Cate struck at 16:39 of the second on the power play to put the T-Birds up 3-2. Kubicek passed the puck up the right wing to Payton Mount as he entered the offensive zone. Two Everett defenseman collapsed on Mount but he passed the puck to Bruggen-Cate as he skated into the zone, putting him in alone against Wolf. Bruggen-Cate beat Wolf with a quick snapshot.

With the assist and goal Bruggen-Cate has an eight-game point streak of seven goals and eight assists.

Jeri-Leon extended the T-Birds lead to two goals 1:02 into the second period. Tyrel Bauer sent the puck behind the Everett net to Roulette. Roulette played the puck off the boards to gain some space and then centered the puck to Jeri-Leon. Jeri-Leon controlled the puck and then whipped it past Wolf.

Jeri-Leon has a five-game point streak with four goals and four assists.

Everett cut the T-Birds lead to one at 13:10 of the third on a power-play goal by Jackson Berezowski.