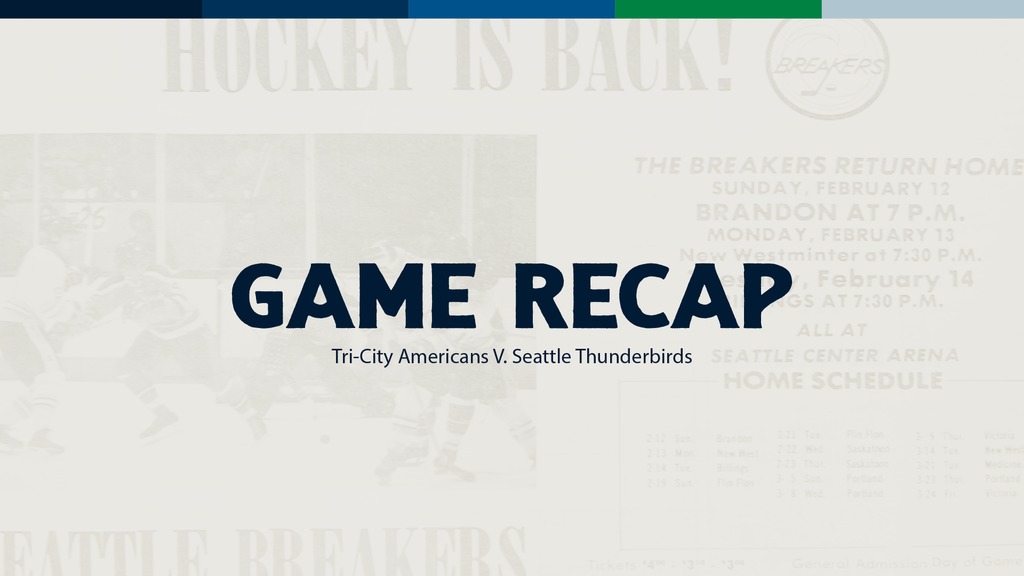 KENNEWICK, Wash. –Despite a pair of goals from Lucas Ciona, the Seattle Thunderbirds dropped a, 4-3, decision to the Tri-City Americans Sunday at the Toyota Center. The loss snapped a three-game winning streak and ended a stretch of six games with a point earned. The Thunderbirds are back in action midweek with another road game. They head to Portland Wednesday to play the Winterhawks at 7:00 p.m.

Thunderbirds head coach Matt O’Dette didn’t think his team came ready to play. “You try to guard against these types of games, after you’ve had a big win,” he said.  “We needed to come out with a purpose tonight and we didn’t do that.”

It started well for Seattle as they got on the board first, with the only goal of the first period. Jeremy Hanzel earned his third of the season at the 7:05 mark with Reid Schaefer assisting. The Thunderbirds had trouble generating opportunities after that, even though they would outshoot the Americans 45-21.

O’Dette said there wasn’t enough traffic in front of the Tri-City goal and many of those shots ended up being harmless. “Our formula, when we are in the offensive zone, is to generate shots with net front presence. Goalies at this level are going to stop shots that they see. One of the factors in why their goalie had such a good game is because he could see the shots and stop them.”

Tri-City took the lead with a three goal second period. The first came while they were shorthanded, scored unassisted by Ethan Ernst at 3:37. It was one of two shorthanded goals the T-Birds would give up.

“It was a factor, clearly,” said O’Dette. “Can’t happen. We weren’t executing right and getting outworked by their Pk a little bit.”

The Americans took the lead for good with an Adam Mechura goal at 6:36. They extended the lead to 3-1 with a Jordan Gavin goal at 15:30.

Just before the second period ended, Ciona scored the first of his two on the night, putting Seattle back within one goal going into the second intermission.  The Thunderbirds then got an early power play chance in the third period, but instead of generating a tying goal, they surrendered another unassisted, shorthanded score. This once came from Lucas Dragicevic at 2:27 and would stand as the game winner.

Seattle mounted a late push, pulling goalie Scott Ratzlaff in the final four minutes for an extra attacker.  It paid off once, when Ciona scored his second of the game at 17:04, but despite a flurry of shots in the final minute they could not get an equalizer.

O’Dette said it was too little too late. “Not many of our guys could say they had good games tonight,” he added. “You come to a building on the road, you need every single guy going. That wasn’t the case tonight and I’ll take responsibility for that.”

After their road game Wednesday in Portland, the Thunderbirds return home Saturday to host the Victoria Royals at the accesso ShoWare Center.

The loss stopped Seattle’s 17-game winning streak against the Americans, including ten in a row at the Toyota Center. Prior to Sunday the T-Birds last loss to Tri-City was a 5-2 setback April 6th, 2021, in Kennewick.

Jeremy Hanzel finished the game with a goal and an assist, extending his point streak to four games.