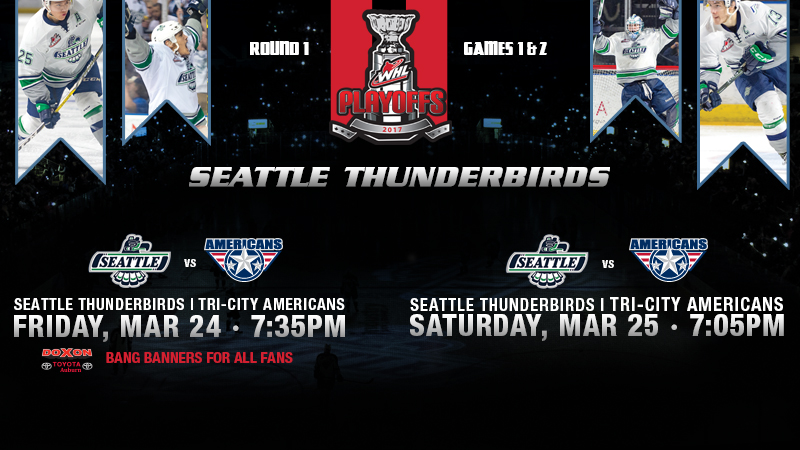 KENT, March 19, 2017 — The Seattle Thunderbirds will play the Tri-City Americans in the first round of the 2017 WHL Playoffs.

Single game playoff tickets for Games 1 and 2 are currently on sale at the ShoWare Center box office and online on the T-Birds website.

Game 5 of the series if necessary is Saturday, April 1, at ShoWare Center at 7:05pm.

Game 7 if necessary will be Wednesday, April 5, at 7:05pm at ShoWare Center.

The T-Birds defeated the Vancouver Giants 6-1 Sunday night at ShoWare Center in the last game of the regular season. Seattle finishes the season in second place in the U.S. Division with a 46-20-4-2 record. 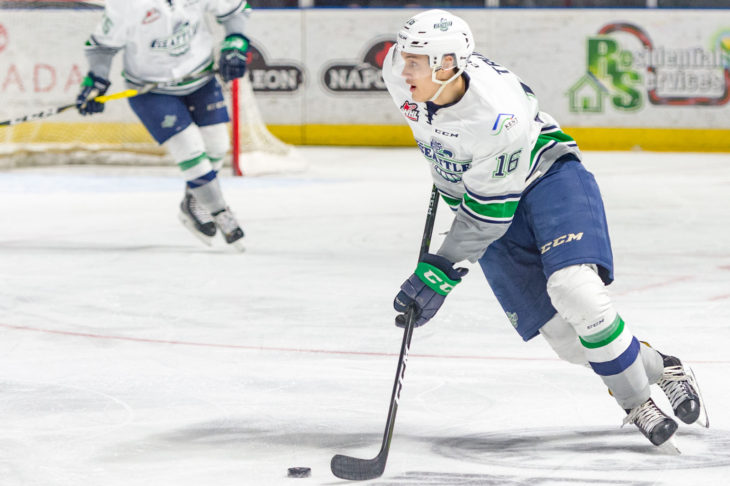 Seattle took a 1-0 lead 30 seconds into the first period. Ryan Gropp sprung the T-Birds on a three-on-two break by feeding the puck to Keegan Kolesar on the left wing. Kolesar gained the Giants’ zone and then dropped the puck to Alexander True trailing the play. True beat Vancouver goalie David Tendeck with a wrist shot on the blocker side for his 23rd goal of the season.

The T-Birds made it a 2-0 lead at 8:24 of the first. Sami Moilanen and Donovan Neuls worked the puck off the right boards to Nolan Volcan in the right circle. Volcan beat Tendeck over the glove for his 15th goal of the season.

Elijah Brown gave the T-Birds a 3-0 lead at two-minute mark of the second period. Zack Andrusiak carried the puck up the left wing and into the Vancouver zone. Andrusiak passed the puck to Brown in the left circle and the center beat Tendeck over the blocker.  Reece Harsch had the second assist on the goal.

The T-Birds took a 4-0 lead at 6:14 of the second on a power-play goal from Matthew Wedman. Jarret Tyszka passed the puck to Austin Strand at the left point. Strand took a slap shot that Wedman tipped past Tendeck.

True scored his second goal of the game at 8:46 of the second to give the T-Birds a 5-0 lead. Kolesar chased the down in the left corner of the Vancouver zone. Kolesar fed True in front of Tendeck and he beat the goalie low. Strand had the second assist. 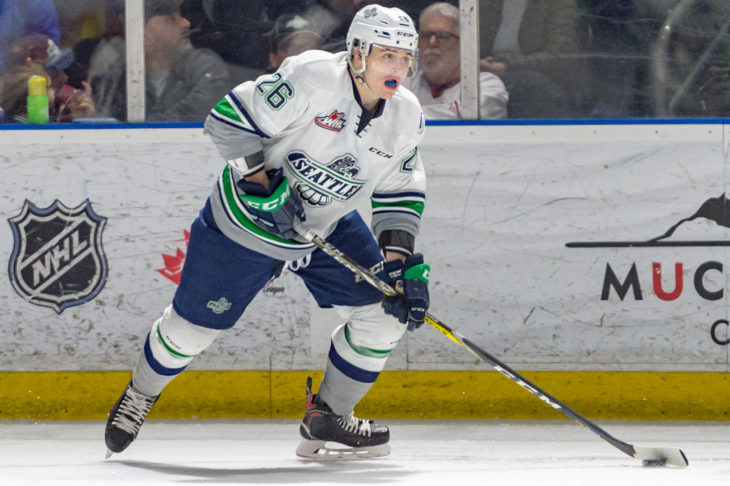 The T-Birds made it a 6-0 lead at 16:36 of the second. Moilanen passed the puck from behind the Giants net to Volcan to Tendeck’s left. Volcan chipped the puck over the goalie’s glove for his second goal of the game. Aaron Hyman had the second assist on the goal.

Seattle outshot Vancouver 12-3 in the second period and led 25-13 in shots after two periods.

Ryan Kubic replaced Tendeck to start the third period. Tendeck had 19 saves on 25 shots and he finishes the season with a 5-14-0-0 record.

Johnny Wesley scored at 15:15 of the third period to end Seattle goalie Carl Stankowski’s shutout bid. Brendan Semchuk had the only assist.

Seattle outshot Vancouver 9-7 in the third period and 34-20 in the game.

Stankowski finished with 19 saves to improve his record to 3-0-0-1.