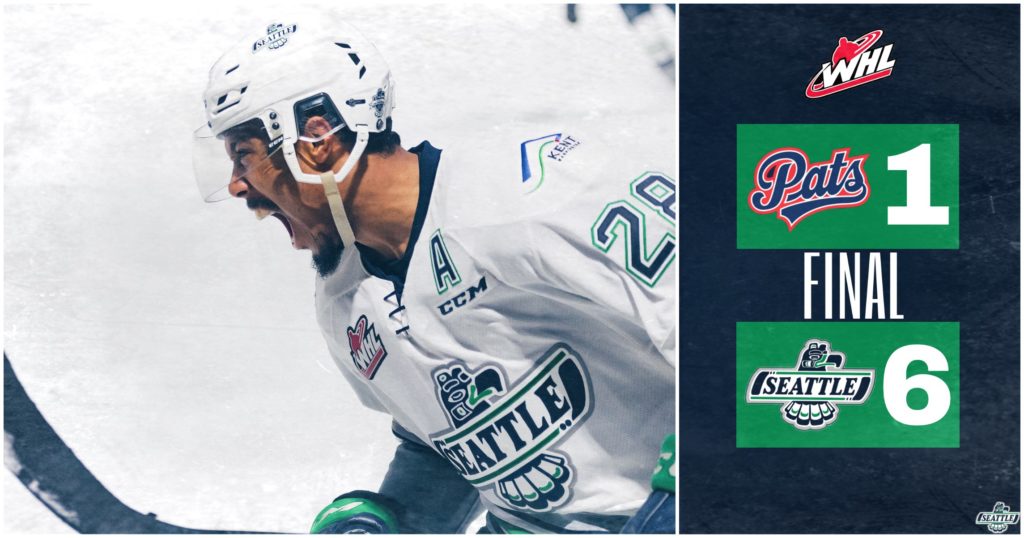 This story on Game 4 was written by Jade Gilson, a junior at Kentlake High School. Jade also produced the graphics you see in the story.

The Seattle Thunderbirds were victorious in a Game 4 battle against the Regina Pats at the accesso ShoWare Center on May 10, 2017 and tied up the WHL Championship Series 2-2.

The first period action was initiated by Regina’s Sam Steel scoring a power-play goal at 13:15. Dawson Leedhal and Josh Mahura were credited with the assists.

With the Pats leading the series 2-1, the Thunderbirds were ready for vengeance. Mathew Barzal set up the play for Keegan Kolesar to pass the puck forward to Ryan Gropp, who sent a straight shot past the Pats goalie. At 16:06, Seattle had tied up the game with a power-play goal of their own.

Less than 20 seconds later, Sami Moilanen stole the puck behind the net from a Regina skater and scored an unassisted goal straight past Tyler Brown, which gave the Thunderbirds a 2-1 lead.

Right before the first period buzzer, at 19:28, Nolan Volcan put the rebound from Scott Eansor’s wrist shot, off a pass from Ethan Bear, into the net. This goal insured Seattle’s 3-1 lead at the end of the first.

Jarret Tyszka scored the first goal of the second period at 6:51, assisted by Kolesar and Austin Strand, for a 4-1 lead.

At 13:52, Alexander True was responsible for Seattle’s second power-play goal of the night. After a holding penalty on Filip Ahl, Gropp and Bear were able to set up True’s 11th post-season goal, and Seattle’s fifth goal.

Near the end of the second period, Kolesar scored. Following the rebound of a Barzal shot, Donovan Neuls passed the puck out of the right corner to Strand at the blue line. Strand’s shot ricocheted off of a Regina right to Kolesar in the slot who then popped into the net for goal number six.

At the conclusion of the second period, the score was 6-1 Thunderbirds.

On the Shaw broadcast  reporter Stu Walters interviewed Scott Eansor after both teams were off the ice. When asked how he felt after Seattle’s six unanswered goals against Regina after going down early in the first, Eansor replied, “It’s a big character start here, at the same time, you know, we have 20 minutes and we had to finish this thing off. They’re a good team, and we can’t sit back for a second”. Eansor also claims that the Thunderbirds have been improving on their discipline, which has pleased coach head coach Steve Konowalchuk.

Following the end of Game 4, Walters interviewed the third star of the night, Ryan Gropp. When Walters asked of the importance of his tying goal in the first, Gropp stated, “It was huge, yeah. Obviously, last night was a pretty emotional game…and we really responded well coming out of the game fast and, you know, stuck with it all game, and really pounded their defense down low. I thought we worked well tonight. It was good”.

Be sure to join us for Game 5 of this exhilarating series. We are one step closer to finding out who will take the 2017 WHL Championship title.