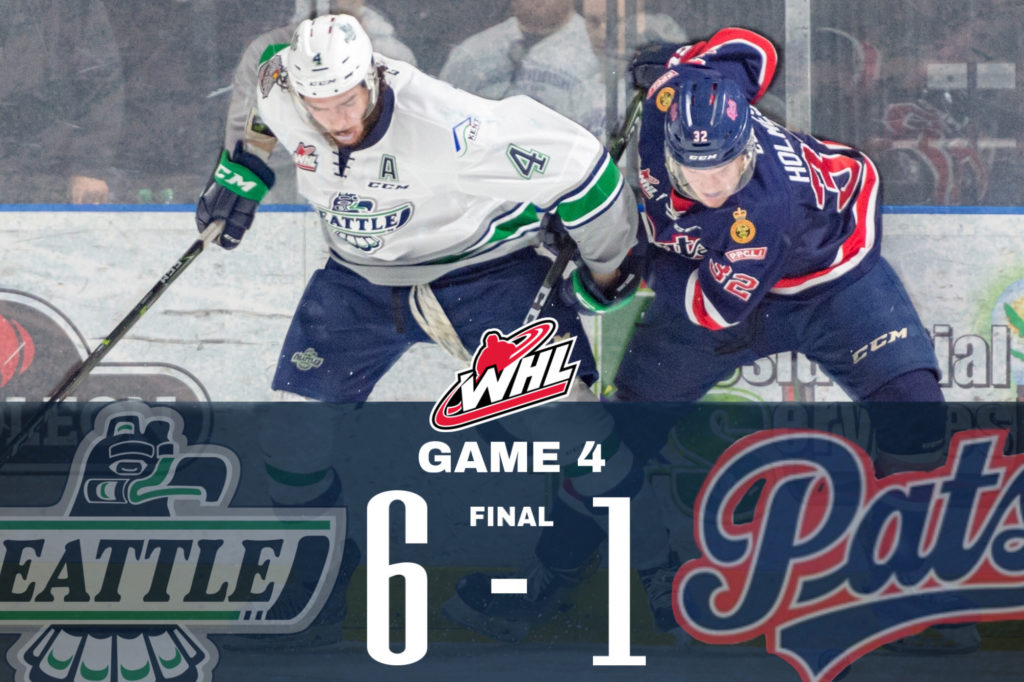 This story on Game  was written by Mitch Escandon, a junior at Kentridge High School. The graphics in the story were created RJ Rico a sophomore at Kentwood High School and Emma Hartvickson a senior at Kentlake High School.

The Seattle Thunderbirds stormed back after a tough Game 3 loss at home to even up the 2017 WHL Championship series with a 6-1 win over the Regina Pats in Game 4.

The T-Birds and Pats played a narrow Game 3 with the Pats prevailing in the end. This didn’t seem to bother Seattle as players and coaches said they were focused on Game 4 and believed in everyone around them. Not a must-win game for Seattle but it sure feels like it, here in Kent at the accesso ShoWare Center.

A promising start for Seattle about a minute in a half after puck drop, Nick Henry is sent to the penalty box for a holding penalty. This gives Seattle the early power play and hopefully an early lead. Regina kills the penalty swiftly and gets back to full strength, looking to pick up where they left off from Game 3.

Head Coach Steve Konowalchuk said in the middle of the first period on the Shaw broadcast when asked about how he wants his team to play, “Got to play on your toes, play with a lot of energy, want to be physical and win the battles.”

Ethan Bear is caught for hooking at 11:19 and Regina is going to have themselves a power play to try and find the opener. The puck is pinned against the boards behind the net and Josh Mahura picks it out to Dawson Leedahl who finds Sam Steel. Steel will rip a shot from the top of the faceoff circle and beat Seattle goalie Carl Stankowski for the opening goal off the power play. Regina leads 1-0.

Liam Schioler is guilty of holding giving the T-Birds another power play and now the ‘Birds look to tie the game. Thirty seconds into the powerplay Mathew Barzal comes streaking down the ice and dishes the puck to Keegan Kolesar who is closing in on net. Kolesar has no angle for a good shot, so he will pass the puck to Ryan Gropp who taps the puck home, to tie the game at one.

Incredibly, only 19 seconds later Sami Moilanen steals the puck behind Regina’s net after goalie Tyler Brown leaves the puck sitting there. Brown being off his line sees Moilanen wrap around and put the puck past him into the goal. Seattle now leads 2-1. With under a minute left to play in the period Ethan Bear skates behind Regina’s net and passes to Scott Eansor who takes a one-timer. Brown makes the save but the rebound falls to Nolan Volcan who’s there to clean up the rebound and put in Seattle’s third goal of the period.

The first period ends with a power-play goal for both teams, and Seattle picking up a pair of goals off a mistake and a rebound. Regina needs to get going quick as Seattle has played well in second periods in this series. The second period will start with a 3-1 Seattle lead.

A dream start to the period for Seattle as Bryan Lockner trips Kolesar giving Seattle a power play to continue their attack from the first period. Nothing to show from the early power play, as Kolesar had an amazing chance looking down the goal but a beautiful save from Brown keeps the Birds lead at two.

The Thunderbirds race down the ice as Austin Strand passes to Kolesar, Kolesar finds Jarret Tyszka in between the two face off circles and he slaps the puck low through a defender. The puck finds its way to the back of the net through Brown’s five hole, to put Seattle ahead 4-1.

Filip Ahl is called for holding an opponent’s stick putting a dangerous Seattle attack back on the power play for a third time tonight. They’ve already cashed in on one of the two and look to score another. This time the ‘Birds will score. Gropp will pass to Bear at the top of the blue line. Bear rips a pass down towards the goal where Alexander True will redirect the puck with great hand-eye coordination, on goal and beat Brown for a fifth time tonight.

True will find himself in the penalty box right after scoring, giving Regina an advantage, they could use to score on. Unfortunately for Regina Dawson Leedahl will skate to the penalty box after being called for high sticking, taking away the advantage for Regina only 10 seconds into their power play, and now it will be 4-on-4 hockey. With a minute left in period two Donovan Neuls gives the puck to Austin Strand who shoots it from the blue line into traffic. The puck will fall to the stick of Kolesar in the slot who goes top shelf to score Seattle’s sixth of the night.

Kolesar has found his name on the scoresheet quite a bit tonight with two assists and a goal, helping give Seattle their five-goal lead. Scott Eansor was interviewed on the Shaw broadcast after the second period First Eansor was asked about how the team would play the remaining period and he said, “Got 20 more minutes and we got to finish this off, they’re a good team and we can’t sit back for a minute.” Seattle isn’t looking to provide any momentum for a Regina team who has struggled thus far. Eansor was also asked about the crowd and said, “Seattle’s been excellent in these playoffs and the start is huge and I think the crowd has helped with that.” He sounded very happy as he should be as Seattle leads 6-1 after 40 minutes of play.

Jordan Hollett starts the third period in goal for Regina. The third period had a lot less fireworks than the first two periods. But the period didn’t lack physical play with a total of nine penalties. Each team had their share of chances on their respective power plays, but no one was able to find the back of the net.

The third period finished with zero goals but a solid performance from Jordan Hollett after being thrown in net. He came up with some nice stops to save Regina from some extra embarrassment after conceding six times in two periods.

The Thunderbirds top the Pats 6-1 in Game 4 to even the series up at two. Konowalchuk said, “2-2 is certainly nice and I think our guys played with more urgency than the night before.” Seattle will look to carry that urgency into Game 5 as there will be one more game in Seattle before heading back east to Regina where we now know the WHL Champion will be crowned in Game 6 or Game 7.

Postgame Konowalchuk, Gropp and Kolesar sat down with the media. Konowalchuk was asked about how the team responded after going down early, he responded with, “You could tell our guys were ready to play at the start there, gave up the power play goal, but stuck with it.”

Kolesar was asked a similar question and said, “It’s huge, we were just telling ourselves there’s a lot of hockey left…we had a lot of time to bounce back from that.” Both seemed quite optimistic after allowing the early goal and just wanted to play Thunderbirds hockey.

Gropp was asked about the turnaround from last night’s loss to tonight’s dominant win and said, “It was huge last night, very emotional, losing another one goal game…and we attacked more in their defensive zone.” Konowalchuk also had a response with how the T-Birds played a bit different to capitalize on more chances said, “Want to generate as many chances as you can get…want to get as many pucks and bodies as you can get to the net.” Seeming very pleased with the improvement of that tonight and it showed with six goals.

While offense may headline the story of the night Seattle’s defense was nothing to sleep on only allowing one goal and 19 shots. Konowalchuk had a shout out for a player postgame, “Solid team defense and I though Tyszka had a strong game…really winning a lot of battles.” Tyszka along with strong defense added a goal to his name on the evening.

Lastly, Game 5 will be Gropp’s last game in Seattle. He had a quick comment on that, “It’s just another game for me. I’m looking forward to it and just want to have a good game.” He said he loves playing here in front of the fans and seems like he wants to give them a show one last time.