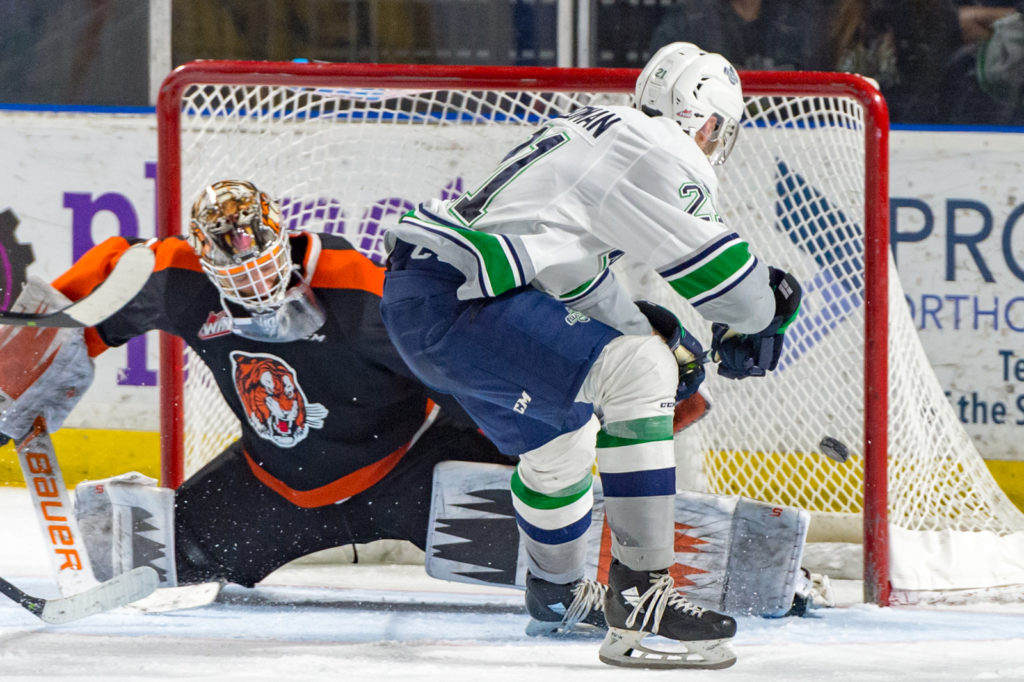 KENT, February 9, 2019 — Matthew Wedman was the hero Saturday night at accesso ShoWare Center. But it was Andrej Kukuca who set him up, as the Seattle Thunderbirds beat the Medicine Hat Tigers 4-3 in overtime in front of 4,053 fans.

In overtime Kukuca made a sublime bank pass off the left boards to spring Wedman on a breakaway. Wedman came in alone on Medicine Hat goalie Jordan Hollett skating left to right. Wedman beat Hollett high with a backhand shot at 3:18 of the extra frame to send his teammates sprinting off bench to mob him.

Seattle improves 21-26-5-1 and are three points ahead of the Kamloops Blazers in the second wild card playoff spot in the Western Conference.

The T-Birds next game is Tuesday against the Tri-City Americans at 7:05pm at accesso ShoWare Center.

Seattle tied the game 1-1 at 11:58 of the second period. Matthew Wedman won a faceoff in the right circle to Tyler Carpendale on the right hash marks. Carpendale curled around the top of the circle and took a shot. Carpendale’s shot rebounded off Hollett into the air. Andrej Kukuca crashed the net and whacked the puck past Hollett and into the net with a backhand shot  before it hit the ice.

The Tigers took the lead back at 18:18 of the second on a goal from Tyler Preziuso. Hamblin and Jevne had the assists.

Medicine Hat made it 3-1 when Ryan Chyzowski scored at 4:51 of the third period on assists from Jevne and Linus Nassen.

Jake Lee held the puck just inside the offensive zone when he spotted Sean Richards skating down the slot. Lee hit Richards with a pass and Richards put a shot on net. Richards got his own rebound, shot again and Kukuca tipped it through Hollett’s legs at 10:18 for his second goal of the night.

Lee took a wrist shot with Noah Philp in the high slot and Kukuca screening Hollett. Philp tipped Lee’s shot and then the puck may have deflected off Kukuca’s skate and past Hollett at 13:15 of the third. The goal was credited to Kukuca on the ice but could be changed to Philp upon video review.

Seattle goalie Roddy Ross made 27 save and improved his record to 8-3-0-1.