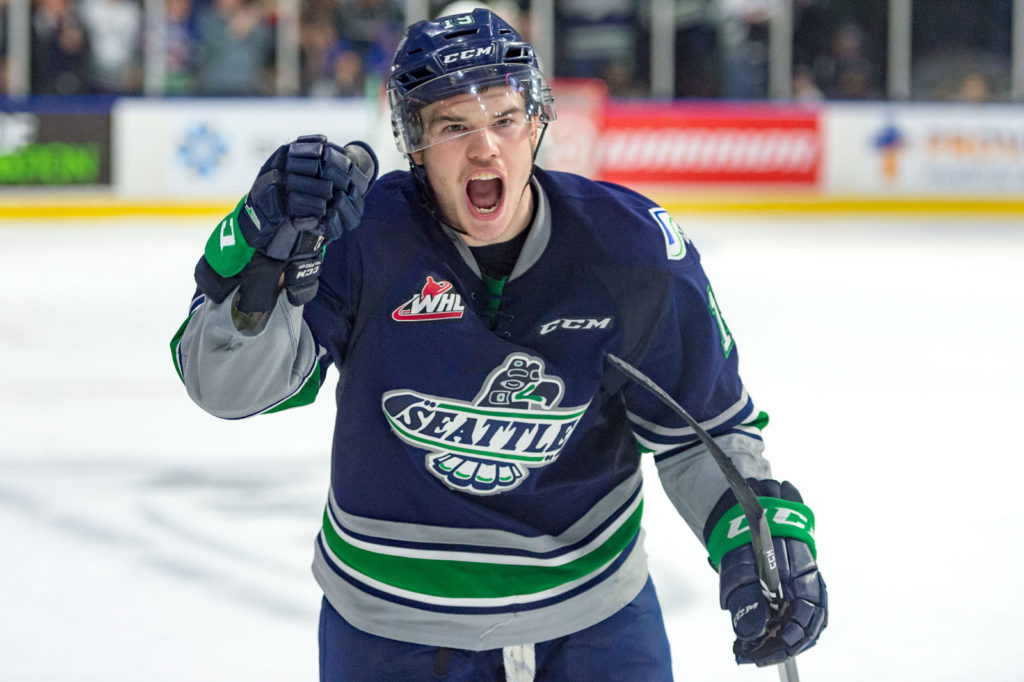 EVERETT, April 7, 2017 — Donovan Neuls scored with 59 seconds left in Game 1 of the Seattle Thunderbirds Western Conference Semifinal game against the Everett Silvertips Friday night to give the T-Birds a 3-2 win at Xfinity Arena in Everett.

Neuls heroics came after the Silvertips tied the game 2-2 at 18:24 of the third period on a goal by Aaron Irving. With the T-Birds trailing the Silvertips pulled goalie Carter Hart with 2:12 left in the game. Irving scored on a slap shot from the right point off assists from Dominic Zwerger and Devon Skoleski.

Off the ensuing faceoff after Everett’s tying goal the T-Birds got the puck deep in the Everett zone. Austin Strand passed the puck to Mathew Barzal in the right circle. Barzal took a wrist shot with Keegan Kolesar screening Hart. Neuls got the rebound to Hart’s left and backhanded with his back to Hart and the shot beat the goalie over the left shoulder. 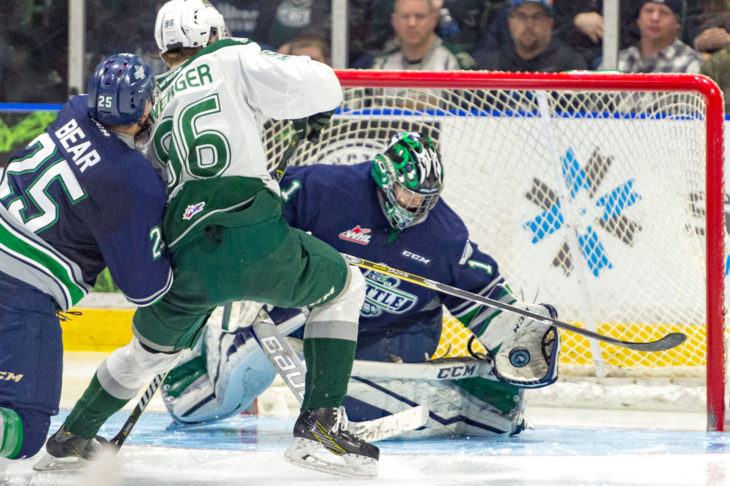 Seattle goalie Carl Stankowski made 21 saves to get his fifth win of the playoffs.

The T-Birds went in front 1-0 at 2:07 of the second period on a power-play goal from Barzal. Alexander True passed the puck out of the right corner to Neuls at the right point. Neuls crossed the puck to Barzal in the left circle. Barzal skated at Hart and took a shot. Barzal got his own rebound and put it past Hart at the post.

Everett tied the game 1-1 at 17:53 of the second on a goal from Eetu Tuulola. Connor Dewar and Noah Juulsen had the assists.

The T-Birds outshot the Silvertips 13-10 in the second period and led 25-12 in shots after two periods. 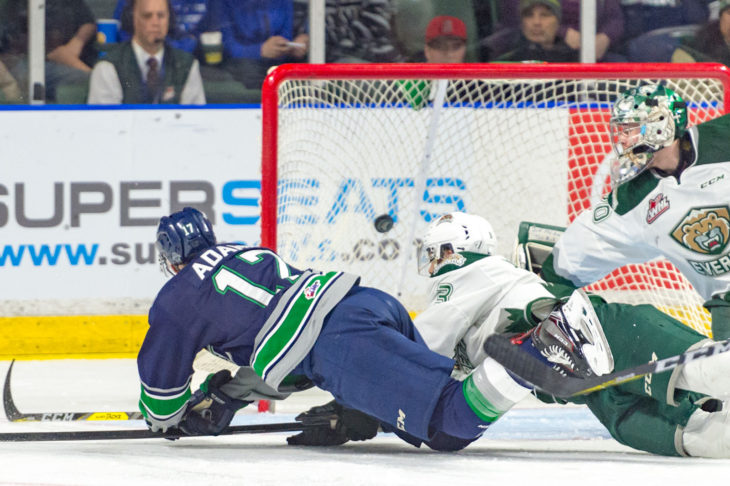 A great individual effort by Tyler Adams put the T-Birds in front 2-1 at 5:31 of the third period. True and Adams tied up an Everett defender in the slot. True got a backhand shot on goal that rebounded off Hart to the bottom of the left circle. Adams dove at the puck and slapped it into the net as Hart tried to lunge over and make the save.

Everett pulled Hart with 20 seconds left in the game to try and tie the game a second time. The T-Birds tied the puck up on the right wall in their zone and ran out the clock.

Seattle outshot Everett 33-23 in the game.

Single game tickets for Western Conference Semifinal series against Everett are currently on sale at the ShoWare Center box office and online at the T-Birds website. The ShoWare Center Box Office is open Monday through Friday 10am to 5pm.

For the Director’s Mortgage 2-for-Tuesday Game 3 fans that purchase 20 tickets at $15 each, which is just $300, will receive an additional 2 FREE tickets plus $10 worth of Chuck-A-Pucks.

For Game 4 fans can purchase 10 tickets at $22 each for just $220 and they will get an additional 2 FREE tickets plus $10 worth of Chuck-A-Pucks. The Group Ticket Special for Game 4 is available online.